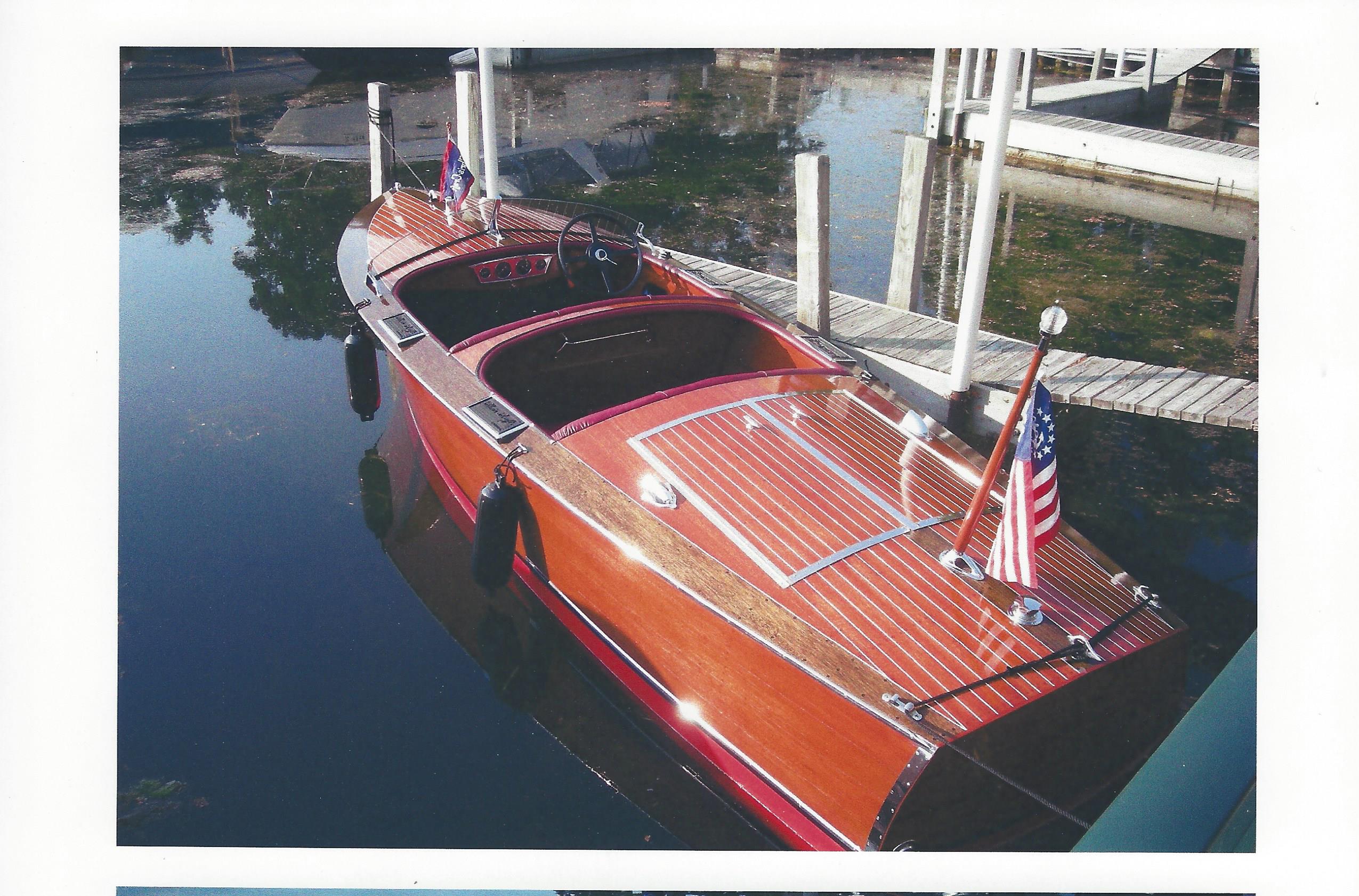 by Lance Ehrke member of the Glacier Lakes chapter

Our Chris-Craft is a 1933 18′ Deluxe Runabout. She was built in late 1933 and delivered in early 1934 to Green Lake, Wisconsin. Her serial number is 33013 and as an early model of the family of 208 runabouts that were built over the next 5 years. She has a number of unique features. She has a black waterline, an oversized steering wheel and gears from a 1933 Ford Model T, the ignition switch was from a 1928 Dodge car, a nickel plated robe rail, and the stainless rub rails arrow design came from the CC triple designs. After a 25 year life on the lake there was a period where a lot of damage was done. A hole was chopped in her deck to handle a big anchor. Finally, she was dragged partially ashore, her engine run until it blew up. The damaged hull and oil covered interior was left partially submerged. The engine was removed and used as a buoy anchor at the Green Lake Marina. After about 8 years in this condition, we acquired the remains in 1968 and planned on restoring her to operating condition.

After several years of cleaning, reading, and retrieving records from the Chris-Craft Factory, we coerced our 5 children to begin stripping varnish, washing oil soaked interior wood, and looking at pictures of what the boat would look like when she was restored. They worked hard on cleaning the dried oil and dirt. They never complained out loud about anything again. In 1980 we found a replacement Model B engine in New York and Peter Henkel in Detroit restored it with upgraded electronic ignition. There were fits and starts on restoration, with replating hardware (some chrome and other nickel plated from earlier CC triple parts, new windshield glass, checking and testing instruments. The deck damage and the dried-out hull were a mess. We attempted to repair the decks, but they were too far gone.

With the arrival of a 5th grandchild we decided to completely restore the boat. After a year in planning and working with an excellent group of skilled experienced help, the boat is restored to her original delivered condition. We added a bilge pump and bilge blower. New deck, 3M bottom and original sides. We replaced fuel tank and fuel lines. The upholstery was replaced with correct CC antique red Naugahyde, kapok seating, and synthetic horse hair seat backs.

She was finished at the beginning of July 2008 and has worked perfectly. She has won a number of boat show awards. She is back at her Green Lake home cruising with our children and grandchildren.