For The Love Of A Boat 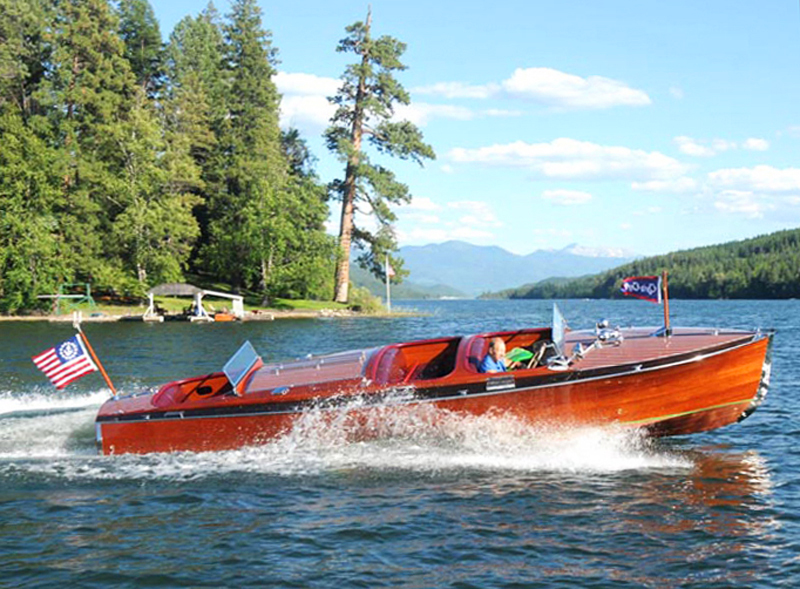 In the much-fabled “summer of 69” and at 14 years old, I first saw her and fell in love. It was in a neighbor’s barn near our family’s summer home on Swan Lake in northwest Montana. She was beautiful, stunning, and a lot older than I and went by the name Seabiscuit as a 1937 Chris-Craft 25′ Custom Runabout.

After that first infatuation, she never left my mind, even as those normal life events, high school, sports, college, and “real girls”—unfolded. A chance encounter in 1980 reunited us, and an hour later she rolled into our Montana driveway. She was not the water-ready beauty I had remembered, however: now 11 years older, grayer, stripped down for a restoration its new buyer couldn’t afford to complete, with her engine disassembled into over 100 pieces. Working with Steve Nichol (another Big Sky chapter member), we began the restoration in earnest. Within a year we had her in the water, and since then Seabiscuit has now been in continual use for 38 consecutive summers where it has provided incredible memories for many riders. Along the journey, she has won top prizes in several dozen boat shows throughout the United States while undergoing two smaller restorations. Numerous publications, including Boating Life, have chronicled her long successful career, and in 2004 Lincoln Navigator rented Seabiscuit for a photoshoot, using it as the tow package for the front page of their website.

Seabiscuit originality uniquely distinguishes it from the other 74 25′ Custom Runabouts built from 1932-1938. More than 95% of wood above the waterline remains original while over 30% of its chrome, never re-plated, remains in factory-fresh condition. Its straight-eight Chrysler Majestic engine is 100% original, and its cloth-covered wiring, dashboard, steering wheel, and leather upholstery are faithfully restored or replaced to original specifications. We believe none of the roughly two dozen remaining boats of this series exist today in such original condition. The dry Montana air has been kind to Seabiscuit. At now-82 years old, Seabiscuit still looks like the young maiden I once met in 1969.

The mid-to-late 1930’s represented the height of wooden boat design elegance as the simpler and straighter lines of the 1920’s gave way to rounder curves, more chrome, and the influence of art deco (the Chrysler Building in New York for example). Seabiscuit’s early “barrel back” transom, the crystalline dashboard, its multicolored steering wheel, and the precise symmetry of its gauges and chrome fittings reflect this interesting architectural style.

Since 1980, I have collected and restored many wonderful boats: a 33′ 1927 Garwood “Baby Gar” with a Liberty engine; a 33’Fay & Bowen launch; a hugely-sought-after Stan-Craft “Torpedo”; and others. Today, I own a 1928 26′ Chris-Craft; a 1946 Century Seamaid; a 1906 25′ Fay & Bowen launch; and a 1923 Old Town “square stern” canoe with a period-matching Johnson outboard. As wonderful as these other boats have been, Seabiscuit remains my favorite as she has since 1969. Seeing her speeding into the sunset while scattering water like diamonds in the heart of the Rocky Mountains on a magical lake called Swan Lake is indeed a beauty to behold. I am fortunate to be a 38-year ACBS member and celebrate a wonderful story with those who appreciate the true wonders and joys of a bygone era.