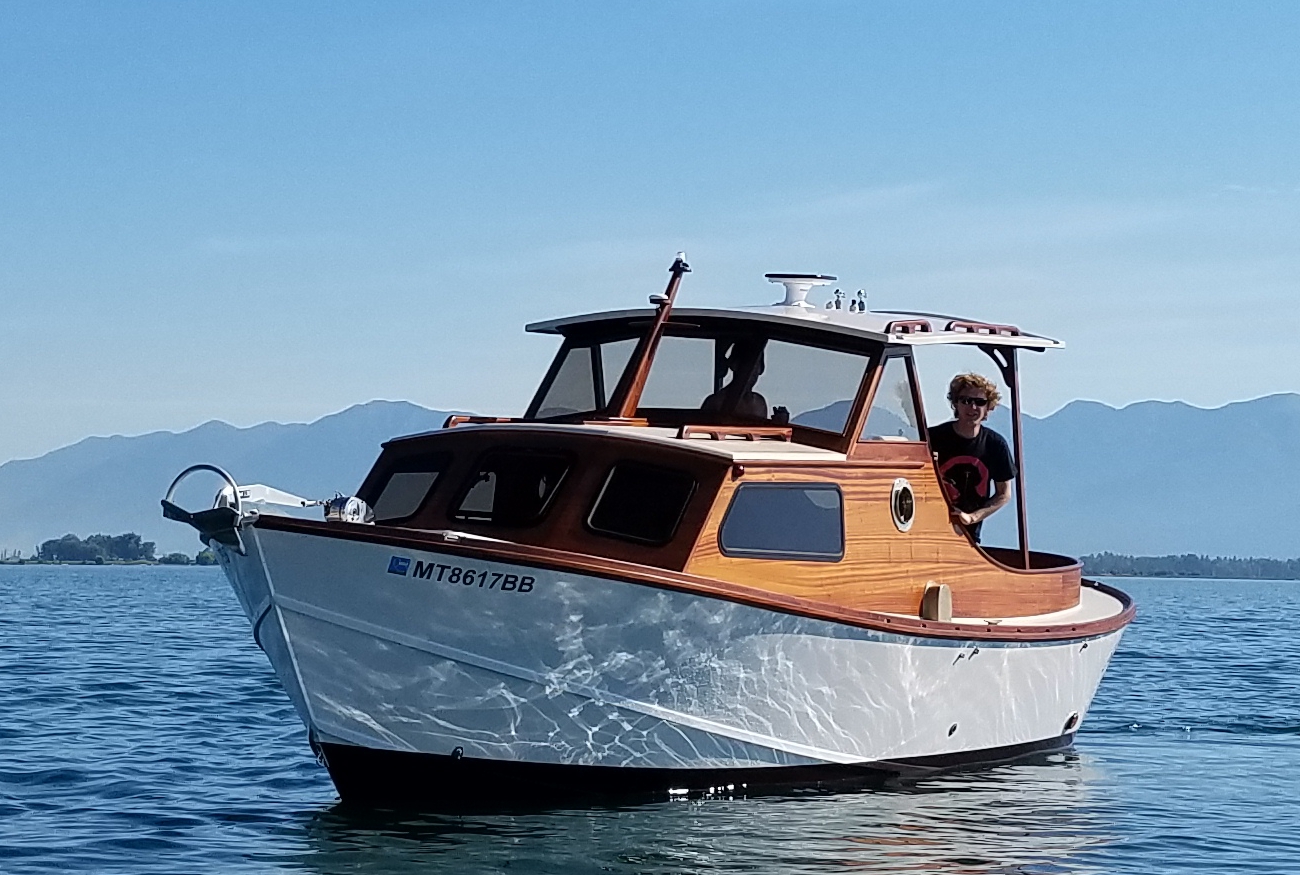 by Neal & Jean Ganser members of the Big Sky chapter

My son Quentin Ganser was doing well in mechanical engineering. However, being an active young man with a gift for working with his hands, he was not enthusiastic about life in front of a computer. Discovering the Northwest School of Wooden Boat Building in Port Hadlock WA, it was a perfect fit for him. After a year and graduating with an associate degree in classic wood boat building, he passionately expressed it this way “I can’t believe I got to spend a year doing exactly what I always wanted to do”. He was kept over for another year as an intern during which he began construction of forget-me-not along with a crew of students and graduates. She is named for the five petals of the flower for our five children. Quentin was recruited into the aero-space composits industry where he has thrived.

This vessel is a ‘Bartender’, designed in the 1950’s by George Calkins for the rough waters over the sand bars at the mouth of the Columbia River. The very successful rough water, double ended, semi-displacement hull, using what was then new plywood technology, became U. S. Coast Guard patrol boats, surf rescue boats, fishing boats and, like forget-me-not, even cabin cruisers. The Coast Guard test for patrol boats was five complete rollovers in twenty-five foot waves!

Forget-me-not was built over four years from a 26 foot plan stretched to 27’8”. Spruce frames, 3/8” okoume marine ply (double on bottom) and fiberglass/epoxy, this hull is so fair it looks better than many molded hulls. It is finished with Epiphanes paints. Well and main decks are 3/8” ply finished with Pettit paints with anti-skid. Cabin sides and the beautiful rounded coaming are ¼ ply with house milled 3/16” sapele, epoxy veneered both sides and finished bright. Cabin interior is trimmed in cherry with a hand rubbed bees-wax finish by Skidmores. She has a full V-berth, small galley, locker and enclosed head.

Forget-me-not is powered by a Crusader 6.0, 375hp engine placed amidships and tops out at 32 knots. A full electronics array including GPS controlled auto-pilot, radar, AIS and radio equips her for coastal cruising. Launched 2015 at Port Townsend WA, she plies Flathead Lake in NW Montana in summer and occasionally the Pacific NW coast. She tends to win awards at shows and has been described as riding the waves on beautiful furniture – a description that also fits most other ACBS vessels.