Four Generations of Fun Aboard the Shepherd 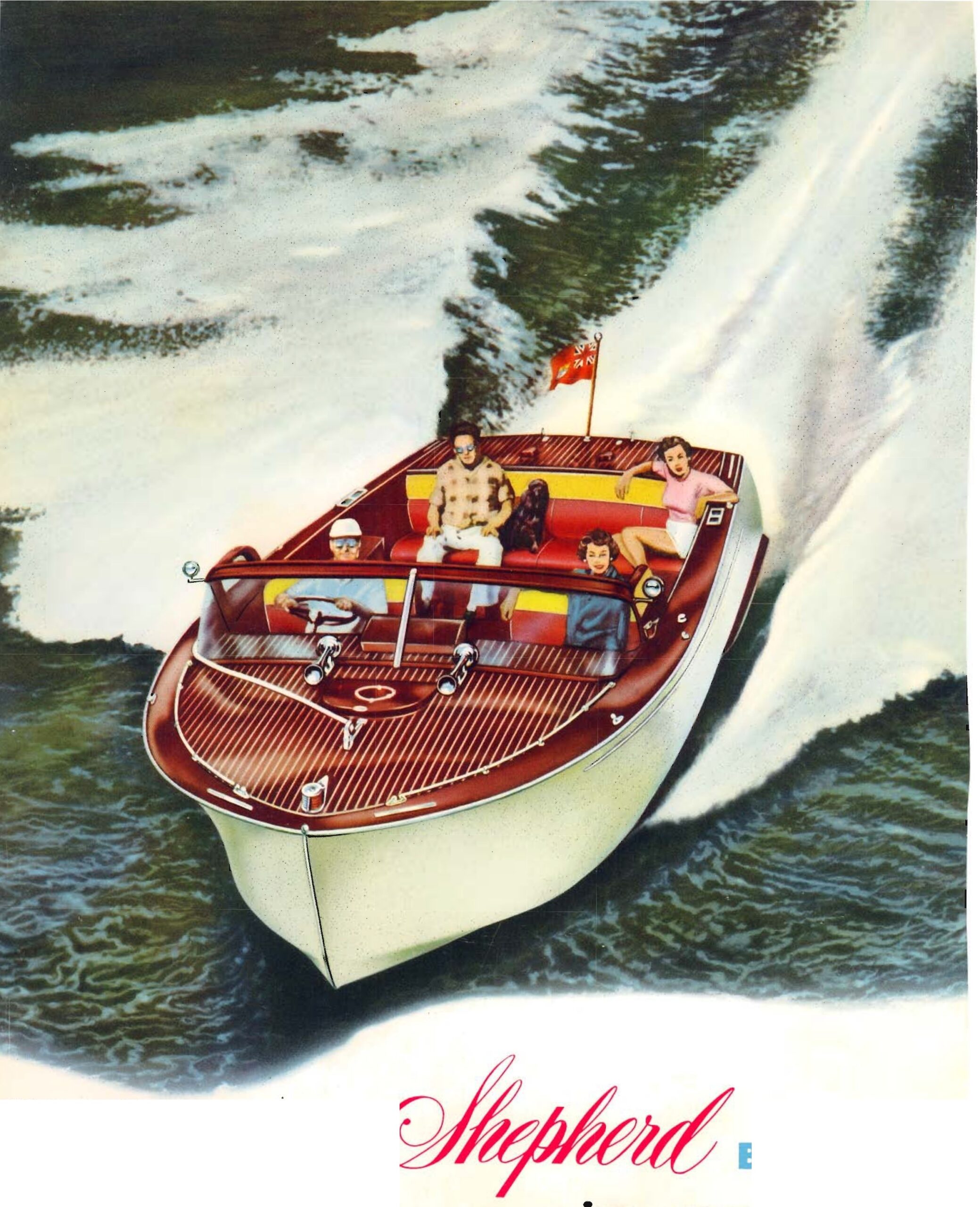 I have been messing around with boats for as long as I can remember, as there were always boats in my life with family and friends owning and actively using them. This story explains how I came to own the “Shepherd”, a 1954 27-foot cruiser. It was built by Shepherd Boat Co. in Niagara-On-The-Lake, Ontario, and shipped by rail to its original owner to reside on Okanagan Lake in the beautiful Okanagan Valley. She was christened “Stampeder” and because of her distinctive size was used for water skiing events at the annual Regatta, some search and rescue missions, and had one very auspicious guest, Princess Margaret was entertained onboard during the 1958 festivities for the opening of the new floating bridge. My parents were often onboard and skied behind her right from the beginning. 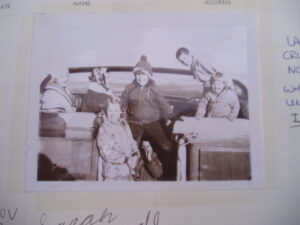 When the original owner sold, very good family friends, the Hindles purchased the boat in 1961, and I have been on her ever since. She was a much beloved part of the historic Eldorado Arms Hotel they owned in Kelowna and the Shepherd and Hotel became somewhat of an iconic presence on Okanagan Lake. They endlessly entertained family and friends onboard and her nickname, ‘The Shepherd’ stuck as it was deemed bad luck to change her name, but using her builder’s name was deemed okay. My wife and I even spent our first anniversary onboard with the Hindles for an overnight cruise in 1979. Lots of shenanigans have been recorded in the ship’s logs over the years! Of interest, the Hindles helped form the Okanagan Chapter of the Antique Wooden Boat Society. 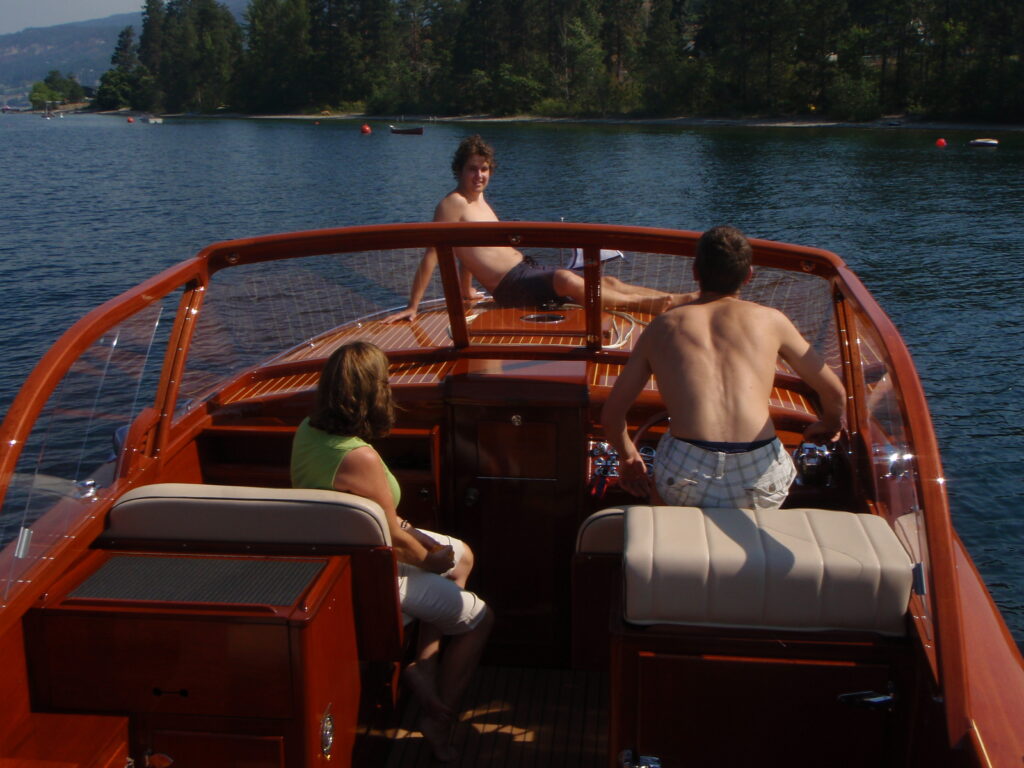 With health challenges to cope with, the boat was neglected for years before it went up for sale in 2003 and I became the third owner. We limped along in her unseaworthy state for a few years until we made the big decision for a full restoration which was done in several stages and took years to complete. The interior was tackled first with original mahogany being kept as much as possible, re-upholstery for the rebuilt seats, and a mahogany swim grid added. The next phase saw the boat in the shop for 1-1/2 years for a complete rebuild, staying as close to original design as possible. On the exterior, true to original, with all mahogany planking, most of the chrome re-done and hull sides repainted her original sea-foam green. Most systems were upgraded, re-powered with two Mercury 350 hp marine in-line V shafts, new electrical and plumbing systems, the ice box converted to refrigerant, and a few other ‘modern-day’ conveniences. The windshield adjusted and the convertible top was replaced with a fixed Bimini for protection from the intense Okanagan summer sun. 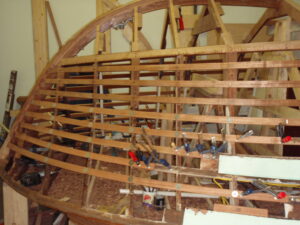 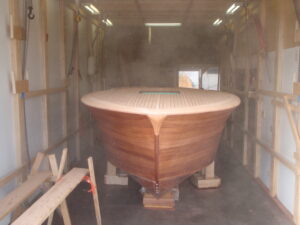 In the summer of 2008 the re-build was completed, the boat finally launched only to have two events threaten our newly restored boat. While away at a wedding a wild-fire broke out across the lake, raining huge embers down onto the boat. Luckily, our son and nephew were able to keep bucketing water over the boat until we were able to get home and move the boat to a safer location. Next, a rider less run-away jet ski, travelling full speed, impaled itself right into our boat at the water-line. Waves from other boats coming to help just about swamped her. Luckily, between neighbors and friends, we were able to tow her to a boat launch and get her onto her trailer to face yet another major repair job. The Shepherd continues to be a big part of summer fun with friends and family: pyramid water-skiing, wake surfing and long cruises exploring the 100 mile long lake with a few overnight stays. Our family has grown and all 4 generations cherish time onboard the “Shepherd”. 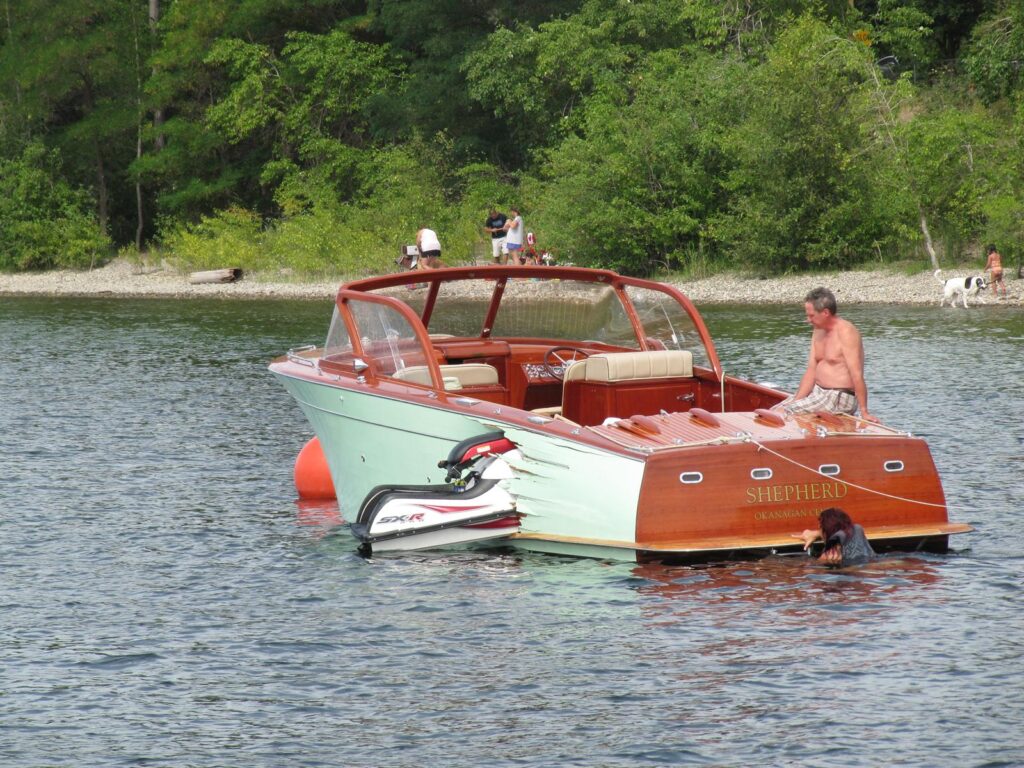