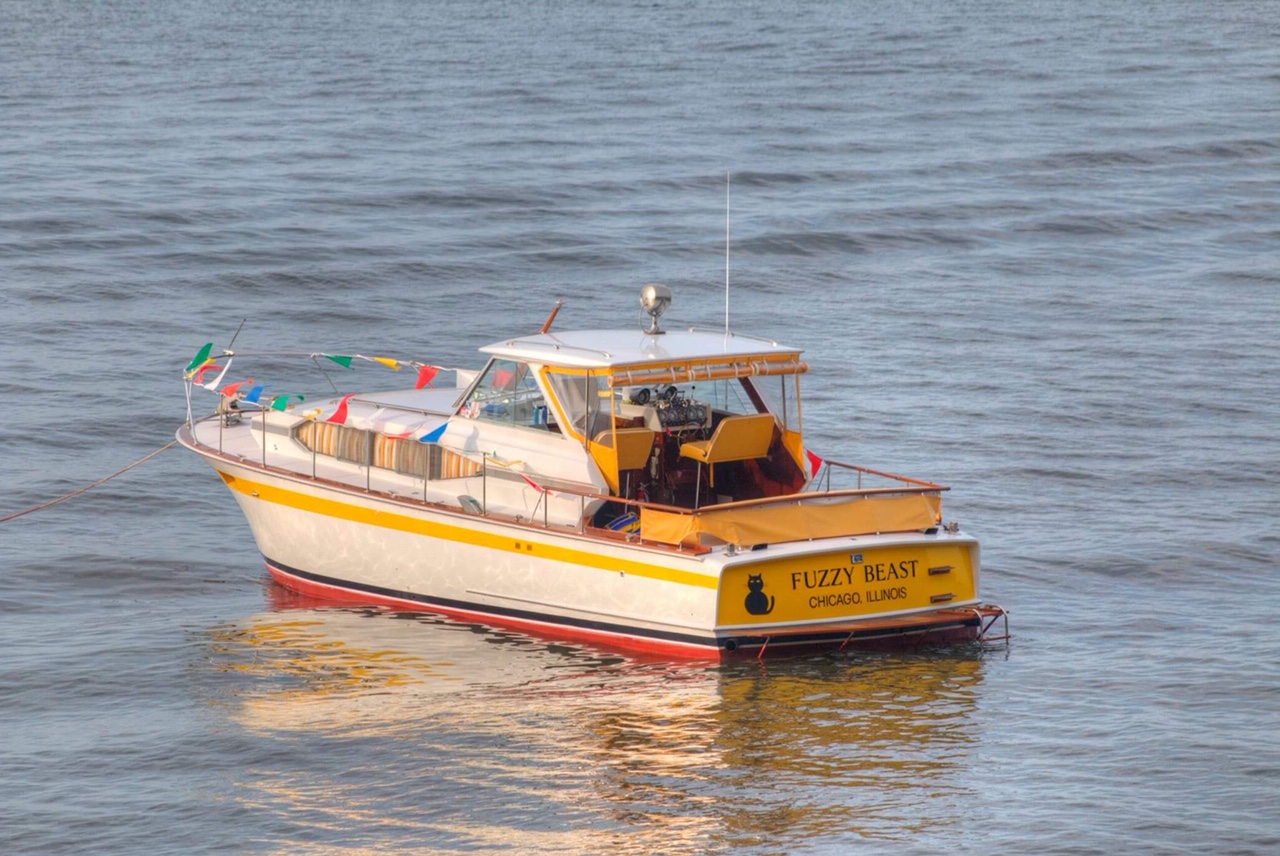 By Elinor Miller member of the Mid-Atlantic chapter

Fuzzy Beast is 37’ 1967 steel-hulled Chris Craft Roamer designed for boating on the Great Lakes. I acquired her in 1974 while I was living in Chicago. She was my second boat and I was her second owner. The name referred to my cat.

My first boat was a 36’ 1966 Chris Craft Constellation. That boat and 74 others perished at 3 a.m. on April 4, 1974 in a devastating shed fire in Burns Harbor, Michigan, a popular winter storage location with Chicago boaters. According to the marina, the fire was caused by an overheated light bulb. No one was injured or killed.

So, right before the official start of the too-short Chicago boating season, 75 boaters (including myself), clutching insurance checks, were frantically searching marinas and marine dealerships around lower Lake Michigan for boats to occupy and secure their hard-to-come-by Chicago Park District slips by the Memorial Day deadline. (If a slip was unoccupied after Memorial Day it was reassigned to the next person on the waiting list.)

My immediate goal was to find a vessel approximately the right size and shape to use for one summer; over the next winter I would find a permanent boat. Instead, what I found was the perfect boat for weekend scuba outings to close-by submerged old wrecks near Chicago. The space beneath the bench running the width of the cockpit was perfect for storing scuba tanks, and the wide swim platform facilitated getting in and out of the water. Fuzzy Beast served as the dive boat for my 20 Fathom-Dolphins Scuba Club for the next 14 years.

In 1987 job circumstances required that I move to Delaware. Among the many things I was reconciled to giving up was Fuzzy Beast, because I thought that this steel-hulled, freshwater cooled boat would fare poorly in salty ocean water. I took off some precious souvenirs and listed her with a broker to be sold.

But within 3 months, new friends in my Wilmington Coast Guard Auxiliary flotilla convinced me that the brackish Chesapeake Bay could be hospitable to my steel boat. I turned down a prospective buyer’s offer, and arranged to have the boat trucked 648 miles to a marina on the Bay. When launched, she promptly sank; the truck ride vibration had loosened a through-hull fitting. Fortunately the slip was shallow and the lines held; only the forward part of the boat touched bottom. The water did not reach the engines and there was no damage. But I had second thoughts about the offer I had turned down for a long time afterward.

Fuzzy Beast is now berthed in Georgetown Maryland, at the head of the Sassafras River, which is essentially fresh water. Out of a deep sense of obligation for having removed Fuzzy Beast from her intended environment on Lake Michigan, I have made sure to keep her rust-free, which has required a lot of welding and replacement of sections of the hull. The color scheme is now yellow and white rather than the original ’60-ish avocado green and orange (interior) and dark blue stripe and transom (exterior). I have aged out of cold water diving (and anyway the Chesapeake Bay is not a good place for sport diving) so Fuzzy Beast is no longer a dive boat, but there have been many good times and good cruises over the 33 years since Fuzzy Beast and I left Chicago.

Two years ago Fuzzy Beast won the “Best Non-Wood” award at the ACBS Chesapeake Bay Chapter’s 31st Annual Antique and Classic Boat Festival in St Michaels, Maryland. Ironically, the boat that I intended as a place-keeper for a year has been with me for 46 years and counting.