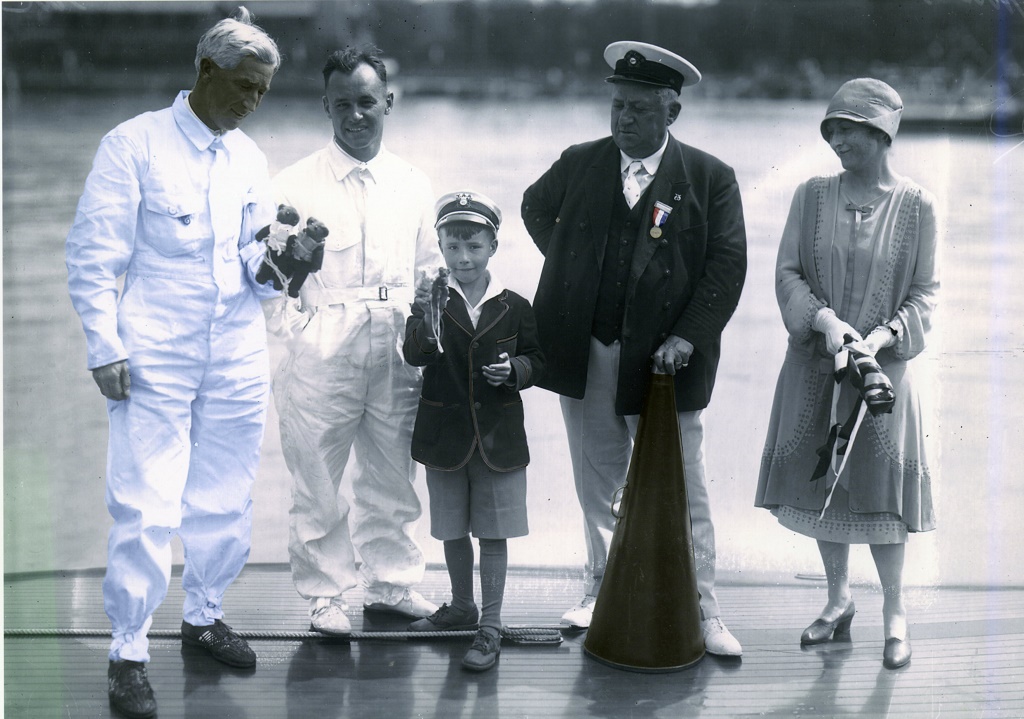 On August 10, 1920, the five speedboats convened in the Solent – a smooth stretch of water near the island – for the first “heat” (race). The Harmsworth Trophy racecourse was an elongated elliptical shape consisting of five laps. Each lap was about six miles – two extended straightaways anchored by a turn around a buoy at each end – for a total distance of approximately thirty miles. One heat was run per day. The first country to win two heats was proclaimed the winner.6

Miss America finally appeared, cruising regally over the calm and quiet sea that had been rough and choppy early that week. At 26 feet long, she was smaller and lighter than the Miss Detroit V. She had been designed to race on the very sort of smooth water she was now idling across. Miss America was piloted by Gar Wood and had two mechanics aboard. One mechanic was Phil Wood – Gar’s brother – while the other was Jay Smith – a son of Chris Smith. The crew of Miss Detroit V was no less a family affair. Her pilot was George Wood, another Wood brother; and one mechanic was Bernard Smith, another Smith son. Additional members of the Wood racing team cheered the competitors from the deck of a nearby yacht. They included Gar’s wife Murlen – who had christened Miss America with champagne – and Gar Wood Jr., the youthful race boat owner.7

When the starting gun fired, the boats that thundered across the starting line were piloted by daring, ambitious individuals whose names would remain legendary far past their lifetimes. Maple Leaf V was driven by English flying ace Harry Hawker, who would later partner with Tom Sopwith (of Sopwith Camel aviation fame) to build Hawker aircraft. Sir Algernon Guinness, an English baronet of the Guinness brewery family and world-record race car driver, drove the Sunbeam-Despujols. All their prior speed and maneuvering experience, however, gave them no collective advantage. The two Yankee boats quickly surged to the front, with Miss America slightly leading her sister. They appeared astonishingly light on the water, creating minimal wake even as they swept around the buoys. By contrast the British boats appeared to clumsily slosh and pound around the course, and the glistening wings of water they slung skyward in the turns – perpetually thrilling for spectators – now added to the ungainly impression.8

Miss America gained a substantial lead following only one lap, while Miss Detroit V began misfiring and slowed. Although Hawker briefly maneuvered into second place – a potential contest as Maple Leaf V carried twice the horsepower as Miss America – no threat materialized. Hawker eventually fell into last place, while Gar kept the throttles open and occasionally looked back for boats that never came. Miss America sailed across the finish line in an easy win, completing the 30-mile course in just over 38 minutes. Miss Detroit V was fourth, a casualty of burnt spark plugs.9

The racecourse was again a pleasing sight the following day; with clear skies, a light breeze, and large windjammer yachts scattered on the calm, gleaming water near the course. The sunny good fortune also shone on the Americans. The two Yankee speedboats immediately took the lead, Miss America streaking ahead like a mahogany comet. For the entirety of the heat, Gar Wood had no competition – Miss Detroit V did not close the lead enough to even stoke brotherly rivalry. When the two boats crossed the finish line – securing first and second place – Miss America had run an average speed of approximately 55 mph, with a best lap of 65 mph – without having yet reached her top potential speed.10

Gar Wood and Miss America – in a stunning display of what harmonious balance between hull design and engine innovation could achieve – were triumphant in the world’s unlimited-power, supreme speedboat championship. The Harmsworth Trophy was going
to America. 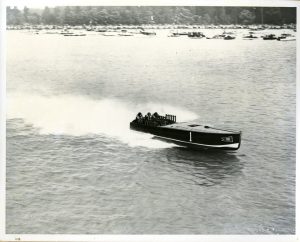 About the Author (Bio)

Kirsten N. Johnson is a life-long travel and boating enthusiast and the great-niece of Gar Wood, the legendary speedboat racer. Growing up in the mountains of western North Carolina, she developed an enduring passion for outdoor activities and sporting events. After receiving degrees in registered nursing and health information technology, for many years Kirsten worked as a travel nurse contractor at multiple healthcare sites throughout the U.S and Alaska.
Kirsten has spent many years researching the Wood family, interviewing family members, and collecting family letters and documents. She is an ACBS member of both the Smith Mountain Lake and Blue Ridge Chapters and a member of the Antique Boat Museum. She currently lives in Virginia, where she is writing a biography about Gar Wood and the Wood family.