When the calendar recently turned from 2019 to 2020, it marked the centurial of a truly epic year in speedboat racing history. One hundred years ago, 1920 was a time for speedboat glory in America, and for two American men in particular. Gar Wood and Chris Smith – working out of a small boat shop in Algonac, Michigan – built the fastest speedboat in the world. With this boat, they won the world’s supreme, unlimited-class speedboat racing championship – the Harmsworth Trophy. The boat was Miss America – a sleek hydroplane made of Philippine mahogany and driven by two converted 12-cylinder, 500-horsepower Liberty airplane powerplants.1

From 1914-1919, the Great War in Europe precluded the Harmsworth Trophy competition. This race between nations – established by England in 1903 – was won by England in 1912 and 1913. The announcement that the competition would renew in 1920 prompted challenges from France, Spain, and America. The European countries eventually withdrew, but America sent three boats to the 1920 August event. Two were Michigan-built hydroplanes, Miss America and Miss Detroit V. The third was Whip-Po’-Will, Jr. (aka Whip), a speedboat from America’s northeastern coast.2

The Harmsworth Trophy Race activities were traditionally based on the Isle of Wight – a small island south of England – in a village called Cowes. Since 1826 – nearly a century – Cowes staged Regatta Week in August. Magnificent boats and yachts adorned the water around the tranquil island, signaling that European royalty and noted gentry were assembling for summer social recreation. Upon arrival at the historic racecourse, the three British defenders were greeted with enthusiastic and patriotic ceremony. They were Sunbeam-Despujols (with a Sunbeam engine), Maple Leaf V (with four Sunbeam engines totaling 1800 horsepower), and Maple Leaf VI (with two Rolls-Royce engines totaling 1100 horsepower).3

The American delegation of watercraft and crews, after shipping across the Atlantic, were welcomed into the festivities. Regatta officials and participants initially regarded the Yankee speedboats with curiosity and moderate skepticism. These perceptions appeared to gain credence when – three days before the first Harmsworth heat – a sudden fiery explosion in the bay attracted immediate and alarmed attention. Whip-Po’-Will, Jr., on a trial run, had apparently suffered a catastrophic gasoline leak in her twin Bugatti engines. Whip’s crew abandoned their flaming craft, diving into the sea where nearby boats rescued them. There was no saving Whip, however; onlookers could only watch as the ocean slowly swallowed the blazing, stately speedboat.4 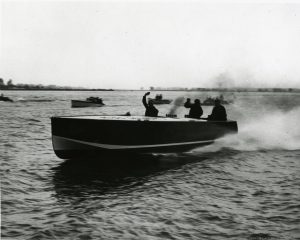