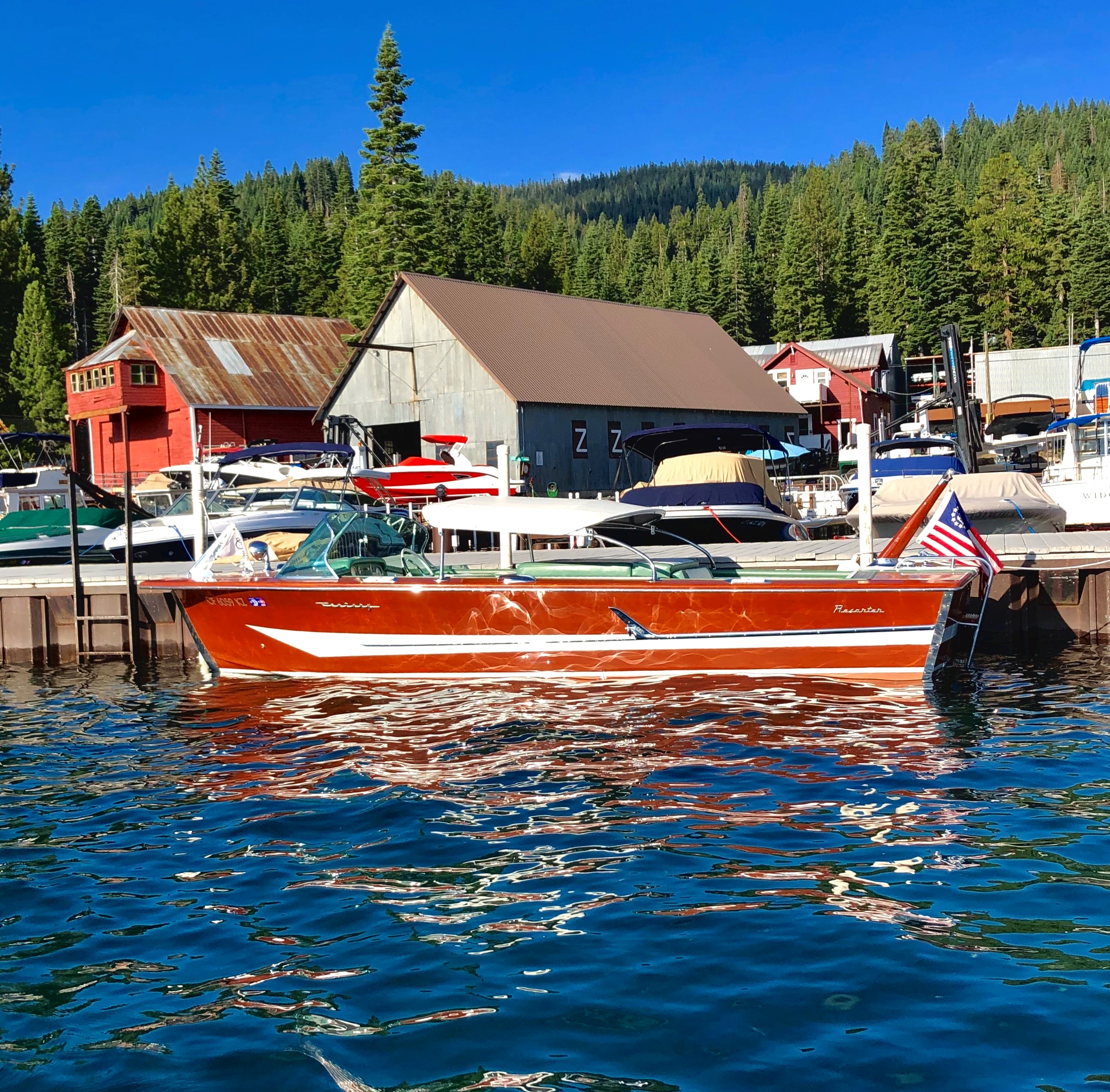 by Damon Duree member of the Northern California/Lake Tahoe chapter

Ginger is our 1962 Century Resorter 19. We purchased her in May of 2017 from Fox Valley River Boats after I saw her on their website. I fell in love immediately.

She was sold in 1962 to James Copeland in Onekama MI by the factory. Nothing is known from that point until Ginger was found outside in Iowa. She had become not much more than a pattern boat when Matt Byrne found her in 1999. He took on the job of restoring her and finished her in 2002. Matt has restored several beautiful boats and in 2017 decided to sell this beautiful Century. I flew out to look at her and do a water test with Fox Valley. I bought her on the spot and made arrangements to have her delivered to Lake Tahoe, her new home.

A little trivia about Ginger. The ’62 Resorter 19 is a one off model year with only about 45 produced. The ’62 and ’61 19s shared the “dog leg” windshield. The paint scheme on Ginger is unique to the ’62 & ’63 19 Resorters as is the Century horse head trim previously used on Coronados. This makes the ’62 carrier nose a fairly rare boat and I love it. The boat never had a name so I named her Ginger from Gilligan’s Island, a glamorous redhead. Her Grey Marine 327 V8 sounds amazing and runs perfectly.

My husband and I are having a great time on Lake Tahoe with our dog Bessie. We cross the 1600’ deep lake almost every time we go out to the east shore and anchor. We swim with friends and relax. On the way back to Sierra Boat, where Ginger has a slip, we usually tour Crystal Bay, where Frank Sinatra had a home, and motor around the blue waters of Tahoe stopping for a swim here and there.
There are two other carrier nose Century 19s on the lake, a ’58 and ‘59 but Ginger is the only one fully outfitted with a sliding top, boarding ladder, Iva Light and folding sun lounger. 2020 will be our third season with Ginger and looking forward to more fun. This year I plan to water ski behind Ginger. Having put 35 hours on her this summer she is now worse for the wear.