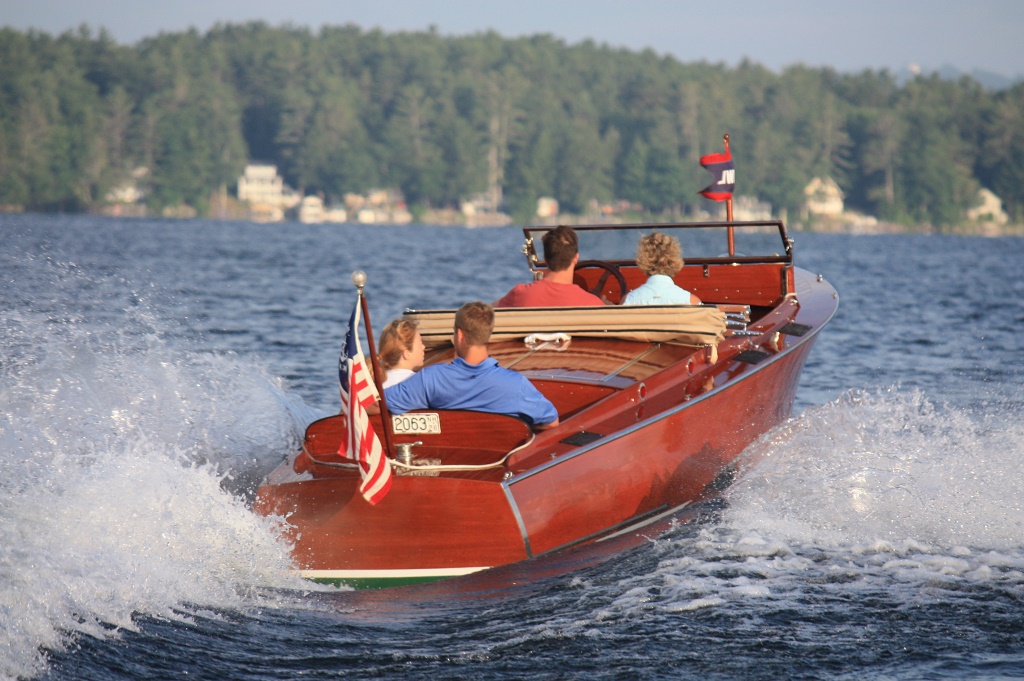 by Steven Perkins member of the New England chapter

Gray Owl is a very original 1928 22′ Chris Craft, Model 1, hull # 1509. It was delivered new by train to Irwin Marine on Lake Winnipesaukee in New Hampshire. In 1936 my grandmother’s uncle purchased Gray Owl from Downing’s Marina for $600 and it has been enjoyed by our family every summer in Alton Bay ever since. It came to us with the name Gray Owl gold-leafed on the bow in place of where the Chris Craft logo would normally go, and sported the normal blue with red-border bow flag, except with the ‘Gray Owl’ name on it. In later years we learned that its original owners, the Fowler family, had a cottage in Alton Bay they named ‘Gray Owl’ and this was their boat before our family purchased it in 1936. It has been boathouse stored its entire life.

For much of Gray Owl’s early life very few in my family were confident boaters and so it was lightly used and outings were special and always cherished; a likely reason for its well preserved condition today. Although as children I remember pulling off the rubrails, laying them across my grandparent’s porch and scouring them with steel wool to brighten them. And also recall riding in the 3rd seat, popping the bubbles in the old finish. I think at some point shellac or some other non-marine finish was coated over the original varnish and it would actively blister under the heat of the sun. Gray Owl also provides some great family folklore. Like the story of how the wrinkle got in its cutwater, a result of my uncle refusing the marina’s help getting it home for the first time, and ramming it into the front of the boathouse slip, and having to return it for repair. Or my great uncle being told at the town gas docks just after its spring launch that “Gee, Mr. Cragin, your boat seems to be riding a bit low in the water”, discovering that he had neglected to install the plug.

In the mid-sixties I recall a family trip or two where the engine wouldn’t start after the boat had sat in the sun at the dock. We were kindly driven home by a the local marina. Being deemed ‘unreliable’ Gray Owl spent a number years sitting up dry on its beams in the boathouse. When I was about 12 my grandmother suggested to take her out and sink her just to get rid of her, which was inspiration for my dad to get working to get her going again.

At this point Gray Owl was close to black in color, her finish having been so aged by UV rays, and her German silver hardware tarnished a dark brown. A family friend helped my dad diagnose what might be needed which included replacing a couple burned valves and re-grinding the rest, and rebuilding the generator. He also found gasket sets for the Autopulse electric fuel pumps and got them running again. I stripped the steering wheel and remember being amazed with how beautiful the walnut wood appeared all shiny. That was my first tangle with varnish.

It was 1973 and it was back in the water, letting it soak for a few days hanging in its slip before enjoying it for the first time in over 6 years. In 1974 we took Gray Owl to Winnipesaukee’s first Antique & Classic boat show at Weirs beach. I was 14 and I remember how jazzed I got by the ‘old timers’ spending so much time going over Gray Owl and admiring her untouched originality. Needless to say we left the show inspired by all the gleaming finishes of the other boats and began to dream about how we might create the same with Gray Owl. Later that summer my friend and I broke out the Zip-Strip and began what would evolve into a multi-summer project in the boathouse. I will never forget how paint remover feels when you’ve smeared some on the back of your calf or the underside of an arm and not discovered it until the burn sets in! We were taking her down to the bare wood for the first time in her life and just like with the steering wheel it was exciting to see the grain emerge. To this day I still admire the beautiful grain Chris Craft selected for the cowling board forward of the windshield. I had refinished a couple small pieces of furniture before but this thing had a huge amount of surface area. Once down to the wood George Johnson helped us with picking a filler stain and the materials and techniques to use in applying a new finish. Gray Owl had always been a lighter color than seen on a lot of restored boats and we were trying to stay true to original. We even used the original excelsior process to apply the stain. Inevitably it would require my dad and his good friend to kick in and apply a lot of steady horsepower to complete the project in 1980.

That summer we brought her back to the Weirs boat show and to our astonishment received a third place award. My love for these old craft was solidified. Since then the family has continued to enjoy Gray Owl and we are regulars at the annual show on Winni and she has provided a wonderful portal for meeting some great old boat enthusiasts through the years.
We have always struggled with restoring versus preserving. In the mid-eighties my dad decided it was time to invest in having the engine rebuilt and the bilge cleaned and re-painted. And then in 2007 the family scuffed up the bright work and put down a couple rejuvenating coats of varnish. Other than that everything on the boat as is it was from the factory. The kapok seats cushions (the driver’s having a spring bed built within it) and seat backs with original russaloid upholstery. The Krogh top complete with full side curtains (trust me you leave the side curtains in the boathouse). Boat hook, paddle, life preservers, fire extinguisher. I’m sure the time is approaching where some of the wood in the hull will need to be replaced but honestly after a 24 hour soak in her slip in the spring, Gray Owl sits in the boathouse for the whole summer without bilge pump, water tight. She’s a wonderful family heirloom.