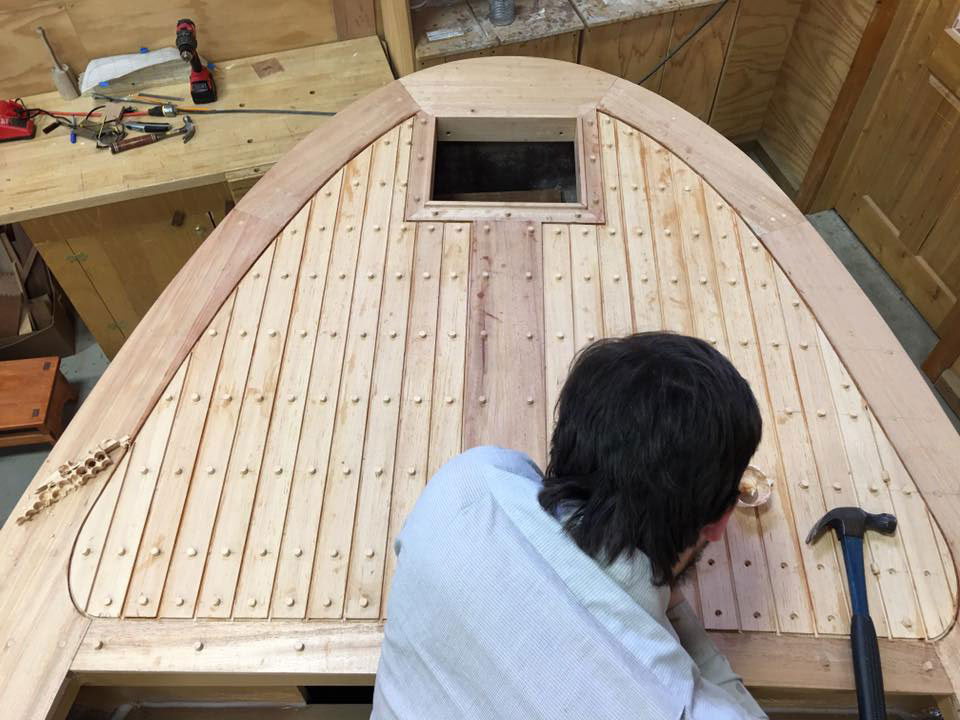 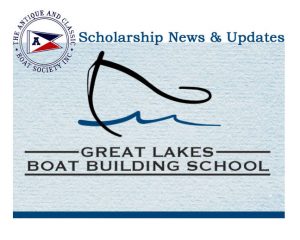 Great Lakes Boat Building School completed its 9th year of operations with 15 students graduating and 10 boats started and/or completed. One of the highlights of the year was a visit by Michigan Governor Rick Snyder as the first stop on his tour of vocational schools in the state. Another highlight was a 10-page article in the May/June 2016 issue of WoodenBoat magazine, which is the premiere magazine of the wooden boat industry.

Year One Comprehensive Program
There were 11 students enrolled and all 11 graduated for a 100% graduation rate. Student demographics by gender: 9 male, 2 female; by category: 4 traditional college age, 6 transitional career age, & 1 avocational (hobbyist/retiree). There were 3 veterans. The 1st Year students worked on the following:
 3 Sweetheart Skiffs – teams of 4-6 students each built a 12’ flat bottom skiff with custom-made varnished oars. The skiffs introduce simple boat building concepts and skills. It is an excellent boat for learning the basics. What made this project special is that the students drew their own designs, using several published designs as guides. Students also made a set of oars for the skiff, as well as an oar for themselves. An alumni returned as a guest instructor to teach leathering of the oars. Students were offered the first opportunity to purchase the skiff their team built. This year both skiffs sold quickly to students. A third skiff – this one with stained cedar rather than painted – was commissioned by a client. 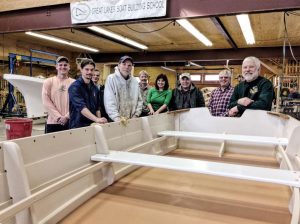  12’ Catboat – students started this Paul Gartside-designed boat, which is an excellent example of a traditional wooden boat, with a Carvel planked hull and steam bent ribs. This commissioned boat will be completed – including the mast and spars – by next year’s class.
 20’ Fisherman’s Launch – students started this Phil Bolger-designed boat, featuring gorgeous lapstrake, steam bent, African mahogany planks. Next year’s students will complete the boat, which will have an outboard motor, seating for 8, and center console steering. Available for sale.
 36’ Crojack Yard for the tall ship FRIENDS GOODWILL, owned by the Michigan Maritime Museum in South Haven, Michigan. Students built it from laminated Douglas fir and finished in epoxy coat and primer, to be completed by the client. This was a great experience for students to work with a precise, unusual shape in that the Crojack Yard is both octagonal and round in shape and has built-in sheeves on both ends. 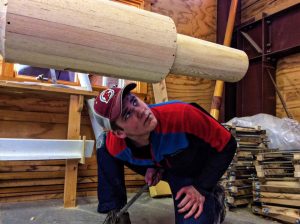  Set of spars for sailboat – students were able to gain experience making spars for a commissioned set. Students built a hollow mast with a boom and gaff that were solid. There was no hardware involved with this set.

Year Two Career Program
There were 5 students enrolled, with one dismissal, for a graduation rate of 80%. Student demographics by gender: 5 male, 0 female; by category: 1 traditional college age, 3 transitional career age, & 1 avocational (hobbyist/retiree). There was 1 veteran. The 2nd Year students worked on the following:
 30’ Fantail Launch – commissioned by the Inland Water Route Historical Society out of Alanson, Michigan. This boat will be used by IWRHS for tours along the 87-mile inland water route in northern Michigan. The fiberglass hull was molded elsewhere and our students began the woodwork on the deck and interior, the engine installation, and the electrical work. Students worked with the U.S. Coast Guard to comply with safety regulations for a vessel used for public tours. The capacity will be 12 passengers plus the captain. This boat will be completed by the Class of 2017 2nd Year student.
 26’ Hacker replica raceboat, Miss A.P.B.A. – designed by John Hacker of HackerCraft, the plans for this beautiful boat are public domain, made so by Mr. Hacker in 1923 in an effort to encourage folks to build their own runabout. The original design was tweaked by our instructors for a modern 500-hp engine and composite wood construction techniques. This was a commissioned boat that will be completed by its owner. 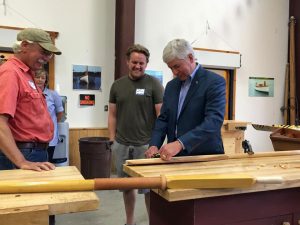 During the school year, we offered a High School Student Visit Day on May 13, 2016. In addition to the tour and lunch with current students, the prospective attendees in grades 11-12 heard from guest speaker Eric Seefeld, a 2013 graduate of GLBBS and self-employed boat shop owner. Eric shared his experiences as part of “The Planksters” who worked on the restoration of the U.S. Coast Guard 36’ Motor Life Boat featured in The Finest Hours film. Based on the true story of the Coast Guard rescue the crew of the split-in-two oil tanker SS Pendleton in a hurricane-force storm in the winter of 1952 off Cape Cod by a single 36’ lifeboat and four junior enlisted men, it is regarded as the greatest small-boat rescuein Coast Guard history.
After graduation on June 3, 2016, the students left and our summer workshops began. We offered 2 Artisan Series Workshops: Metal Casting and Strip Planking. These are two-day workshops. We offered 9 Build Your Own Boat Workshops, utilizing kits from Chesapeake Light Craft Company: Northeaster Dory, Annapolis Wherry, Shearwater Kayak, Wood Duck Kayak, Kaholo Paddle Board, Eastport Pram, Passagemaker Dinghy, Ultralight Dinghy, Skerry, and Cradle Boat. Each CLC workshop is 5-6 days in length, beginning on a Monday morning and concluding by Saturday.
The summer concluded with our annual BeerFest & Silent Art Auction, held on September 2, 2016. This was our largest fundraising activity of the year, with 700 people attending. The event featured live music, beer and wine tasting from Michigan breweries and wineries, four boats sold at auction, and works of art from 45 artists – mostly local to the Les Cheneaux area – that sold through silent auction.
We look forward to the start of a new school year with the arrival of the Class of 2017 on September 18, 2016 for the Welcome Picnic before the classes begin the next day. This class will help us celebrate the 10th Anniversary of Great Lakes Boat Building School!

Find out more about the ACBS Education and Scholarship Program and the opportunity to Donate to this fund.