You’ve got to love this photo of Green Pearl with captain Alan Miklos about 10 years ago.

Photos of Green Pearl along with this story are supplied by Frank Miklos, president of Allegheny Chapter.

Back when my son was 7 years old, I offered to give him the boat if he would row it across the lake and back with nobody else in the boat. He had to do this before he turned 8 years old. That summer he did not do it, but Memorial Day weekend the next year he made sure we took the boat to the lake so he could go across the lake. That Monday morning, he rowed the boat across the lake and back… it is about 3/4 mile round trip… so not real far but for a 7 year old it was a big deal. I sent my nephew in a kayak to follow him.  A few years later he bought an engine for the boat for $50.00. The boat is titled with both of our names since he was under 18 at the time he could not own it outright.  About the boat – my uncle had an exact match to that boat that he bought in the 1950s. It was in very bad condition. I made a building Jig to re-build that boat. In the meantime, I was contacted by a movie producer that needed a classic rowboat. We met with him and made arrangements to have the boat so he could see it in 2 weeks.  (I had showed him photos of my uncle’s). My uncle’s boat was not even taken apart, so I decided to start from scratch and build a new one instead of rebuilding my uncle’s. Well that week my brother and I built the boat. It was ready to show the producer. He never called back. It ended up taking less time to build the new one than it took to take my uncle’s apart. The boat is still used today. We are considering building a larger version. I have the plans for both a 12′ and 14′ boat of similar style. My son and I want to build a 14′ version. Our family had a 14′ version back around 1940. That boat was lost in high water in the early 1960s. I still have the building Jig and all the patterns so maybe someday I will build another of these for someone. They only take about 2 weeks or less from start to finish for a painted one … a little longer for a varnished version. Attached are photos of the original one (b/w). 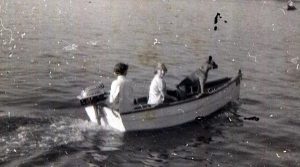 Built this one in my basement in 1992, next to my uncle’s original boat. 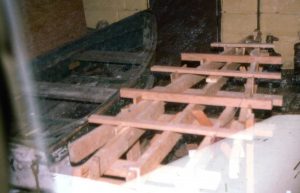 This boat as originally painted in 1992. 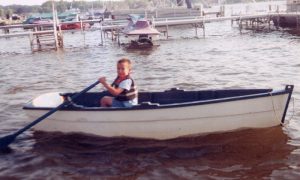 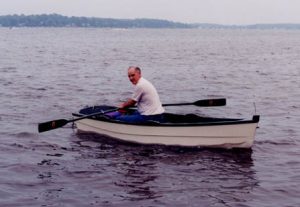 The 3rd one that I built. The owner wanted the boat stained and varnished to use on his 4 acre pond. 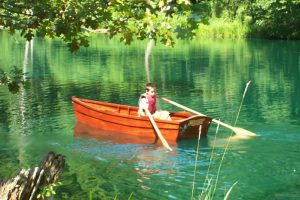