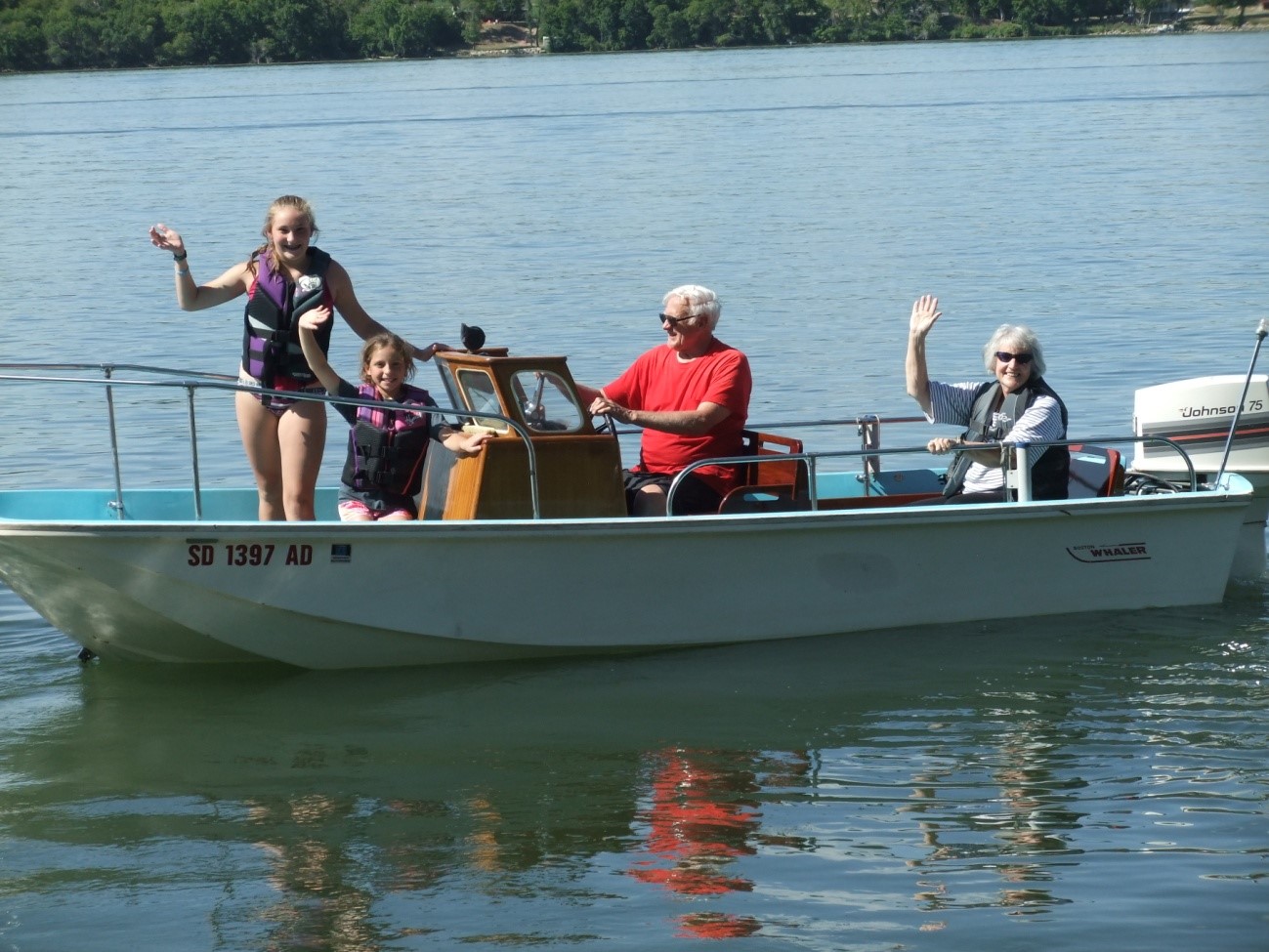 Our 1967 Boston Whaler Nauset was purchased as a temporary stand-in for a 1963 Glasspar Seafair Sedan having its hull restored. The Nauset came from Duluth where she’d had a long and hard career fishing Lake Superior using the radio name Green River. We kept the name since her new home (Big Stone Lake) lies in the former bed of the Glacial River Warren and turns green most summers. Not entirely coincidently Green River came with a 1982 Johnson 75hp, a boat and motor combination used by the Maryland DNR Police back in the days when I lived on the Chesapeake Bay.

The Whaler was to be what classic car people term a driver, not a showgirl. She was going to provide lots of fun on the lake in return for very modest investments of time and effort. That worked out about as well as most of our plans involving boats. A long tackle box running from port side of the pilot seat to the transom installed by a previous owner trapped enough water to rot out the seat base. Removing the box revealed enough screw holes to pose potential water incursion problems as well as a cosmetic one along with additional rotting on the console base.

A single sheet of 3/4″ Sapele from L.L. Johnson in Charlotte, Michigan, was enough to provide material for replacing both sides of the pilot seat and a new base for the console. The new console base, less in the public eye than the seat, turned out well enough but not the seat so a complete one was ordered from Specialty Marine in Ocean Side, California. With unusual foresight, a new rear seat with cushions and the pilot seat were ordered at the same time. In Boston Whaler terms, the addition of the rear seat turned our Nauset into an Eastport. In practical terms the new rear seat and re-installing the “jump seat” in front of the console turned our Whaler into a sunset cruiser for six and, on one occasion, the funeral barge for scattering the ashes of a fellow lake lover.

Patching holes and chasing spider cracks is probably easier on a Whaler than many older glass classics thanks to the availability of gel coat repair paste in Boston Whaler Interior Blue from Spectrum Color. The spider cracks might have become a non-ending task without frequent reminders this was our everyday fun boat not a showboat.

As a single handed fishing boat on Lake Superior, an 18 gallon gas tank under the pilot seat probably made sense. On our smaller lake with no refueling stations two six gallon tanks under the rear seats is more practical. The twin tanks slip into racks mounted on a plywood platform. The racks are narrower at the rear to prevent the tanks sliding backwards toward the transom while sturdy bungee cords attach the tank handles to the internal stern lifting eyes to prevent forward movement. What started out as a jury rig prototype made from leftover bits and pieces works well enough for now, especially with other boats needing of attention.

The 75hp Johnson that came with Green River is the motor I would have chosen for it. Two seasons with the motor haven’t changed that. The 1982 Johnson 75hp is the smaller 49 cubic inch version ported to produce its horsepower at a higher RPM. On a heavier boat that could be a problem but on the Nauset with a base hull weight of around 825 lbs. it makes for a quick, responsive boat with plenty of power to pull a towable or skis at more than responsible speeds. So far the motor’s been bulletproof. Not so the operator whose prior experience included nothing newer than a 1960 Scott McCullough 60 – safety switch? What safety switch?