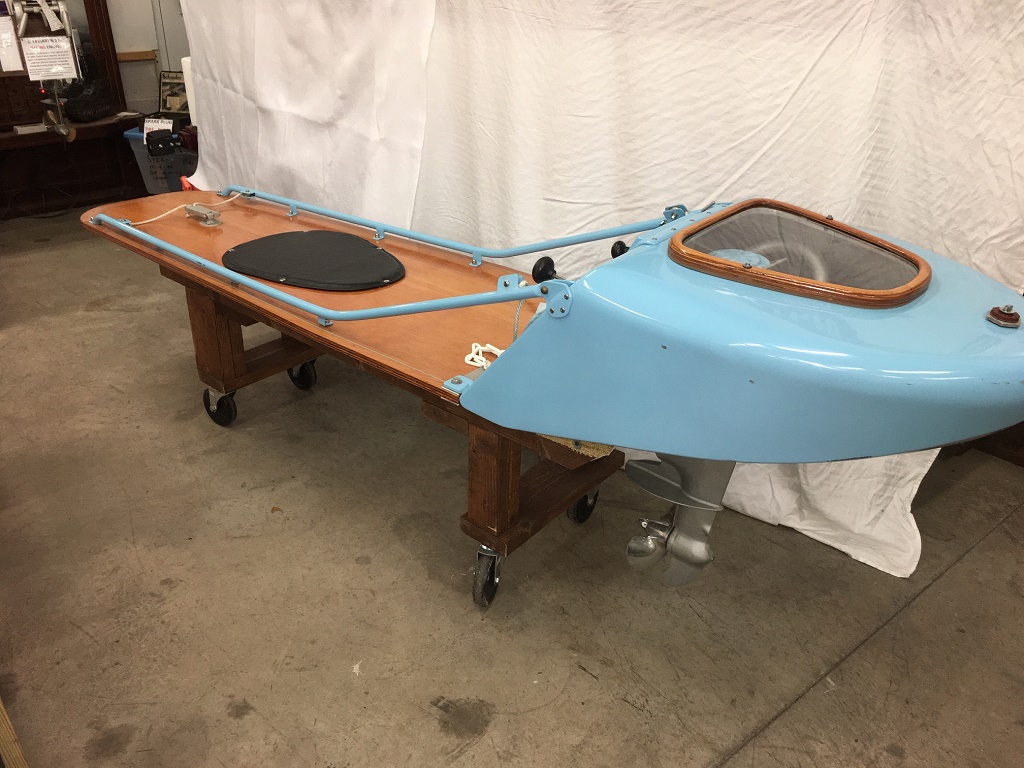 by Steve Shehadi member of the Finger Lakes chapter

The Hansen Skim board was developed by Emil Hansen from Bryn Mawr Pennsylvania and was an early predecessor to the very popular Jet Ski you see today. This project started with Doug Penn finding the nose cone to this very rare boat in Massachusetts and contacting me to let me know what he had found. Me being the boat guy that I am, was instantly interested in this rare unique beauty. I was able to obtain the sizes for the board part from the U.S. patent office and had Bill Edwards fabricate the skim boat, board, rails, rudder and nose cone. I was able to locate another 75 Martin Outboard motor in running condition to replace the broken Martin outboard it originally had.

The hull is made of aluminum and is heavy once the motor is inside, weighing approximately 120lbs. For the sake of portability it was divided into 3 sections, to ease with transportation. It managed to achieve top speeds of 30mph and could be steered via a rudder and leaning your body. An innovative measure for its day was installed; a safety switch which worked in combination with the tiller ropes. If you drop the steering ropes a kill switch automatically shuts off the motor in order to prevent clipped toe nails or worse!
The skim board was featured in The Daily Telegraph, Sydney 1935, which depicted people sitting on the surfboard. It is thought that the actual intention was for the models to stand on the board, but they opted to sit instead because it was more comfortable.

Regardless of the somewhat positive reception of a self-propelled surfboard, it was not welcomed at the beach due to its bulkiness, large size, and dangerous spinning propeller.
The skim board has been shown at the Skaneateles Antique Classic Boat Show displayed with the blown up copy of a story about it in Popular Mechanics (April issue 1950). Note the dents in the nose cone in the pictures.

We personally have never tried to ride/surf it as it is too heavy and we are a little too fearful. There is a Hansen complete skim boat hanging on the wall in the Antique Boat Museum in Clayton NY.