“Heaven On A Sunday” 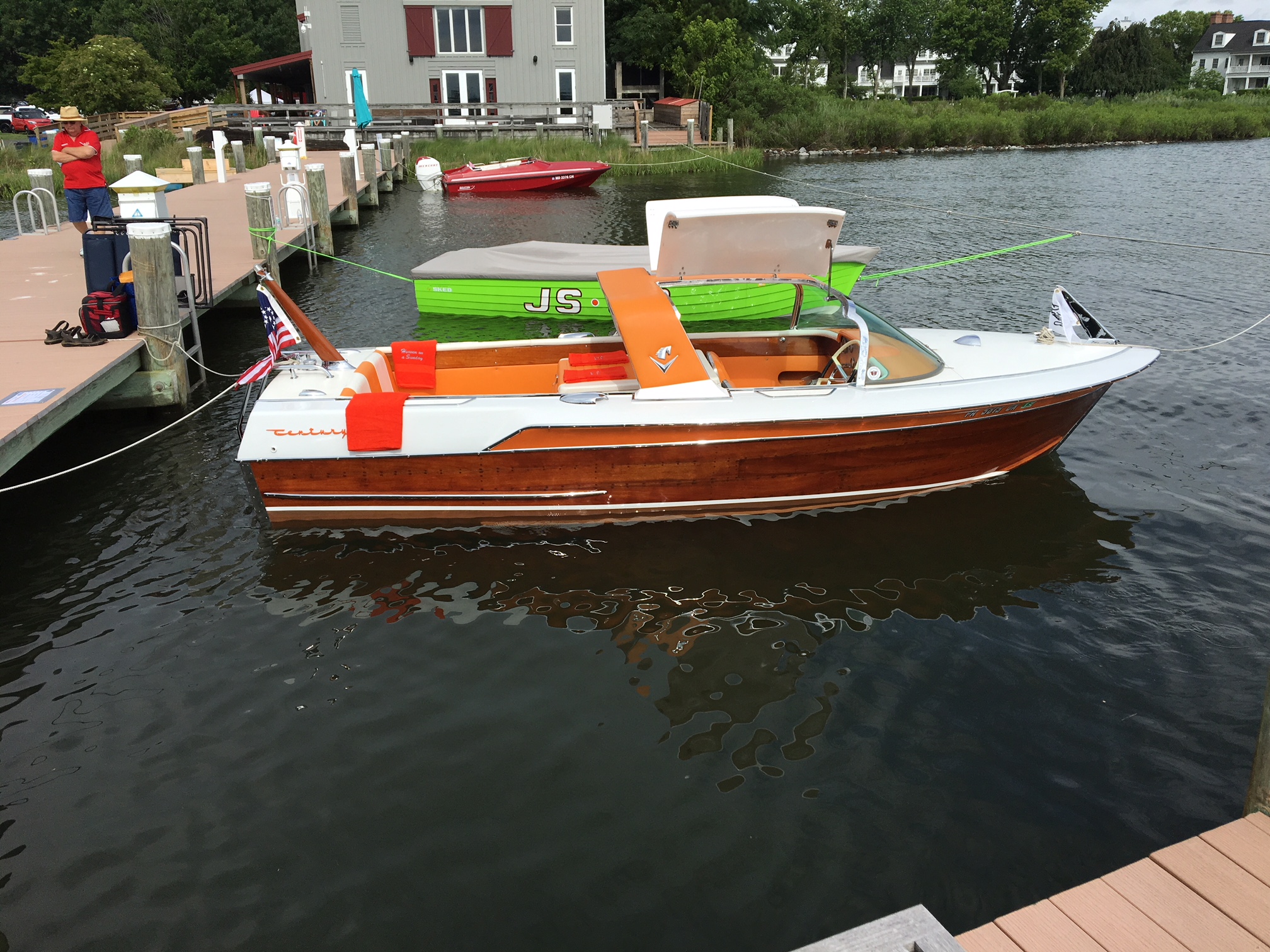 Like many enthusiasts my age, my love of wood boats started in childhood during summers in Madison Connecticut. Ann and I have attended the Antique Boat Museum show and auction for many years while staying at my cousin Janice’s lake house near Clayton, NY. While attending that event, I have seen many spectacular boats, but the Century boats kept calling to me. I had been looking at Centurys for sale online, then in August 2014 I was walking toward the boat museum, and saw this orange and white 1963 Century Sabre with gull wing tops sitting in the auction lot, I knew I was in trouble. I thought it was the coolest boat I had ever seen.

I examined the pictures and documents and saw that Wooden Boat Specialties installed a new bottom in 2008 and Schermerhorn Marina rebuilt the 327 cu in AMC Gray Marine 238 and transmission. Interior and hardware were also done in 2008, and she had been varnished in 2012. I was lucky enough to make a deal with the owners (Mike and Suzanne) and brought her home to Bucks County, Pa. I was able to get it started, but it would not run under load. It seemed to me that the firing order was incorrect, but when I checked the manual, it was wired on 1 of the 2 firing orders in the manual. I also quickly discovered that the timing mark was 180 degrees out and the distributor had not been rebuilt with the engine.

Frank and Bob Miklos had approached me in Clayton after the auction to introduce themselves and tell me that they thought I had a special boat. I took the opportunity to email the Century Boat Club with my findings and asked for assistance. They put me in touch with Nick Arnone in the Wilkes-Barre Pa area who generously offered his shop and assistance. Ann and I trailered the Sabre to Nick’s shop where Joe and Jim started looking her over. We checked compression and confirmed the firing order 1,8,4,3,6,5,7,2. We re-installed the rebuilt distributor from Murley Marine but still had a problem. Joe determined that we had poor fuel pressure, so off to their NAPA dealer for an electric fuel pump. That did the trick, and after it fired up Joe said “let’s take it out”.

Now it was cold and rainy and there were no seats in the boat, but soon Nick’s guys had taken me up the road to Harvey’s Lake where we were flying back and forth all by ourselves in the cold. It was the best ride I ever had. Subsequent to that weekend, Jim helped me strip and refinish the transom to rename her “Heaven On A Sunday” for my wife Ann Sunday. Improvements so far have been new gas tank and fuel pump, rebuilt water pump, bilge pumps, wiring, lights, rudder, strut, prop, restore steering wheel, rebuild center console controls, new cutwater, restored gauges by TLC Restorations, new sending units and new tach cable from Marine Sales. Our home port is Harveys Lake since that is where Heaven On A Sunday found her power again and where we have been welcomed by Josh Bryant and the N. E. Pa ACBS Chapter. I never intended to show the boat, but Josh invited me to their boat show, and now Ann and I take her to these great boat shows where we have met all the great ACBS members and their spectacular boats.