My Dad purchased the “Highlander” in 1954, two years barely used and unnamed. I was 13 and our family was part of a large, extended family who now number near 300. My great grandmother, Lillian Tuttle, was born in 1856, in the town of Bolton on a farm in the north country, several miles from Lake George. She finished her schooling and became a teacher but was called away to Texas to help care for an ill relative. There she met her future husband, William Bixby, who was an assistant baggage handler with a railroad at the time. He became very successful in rail car manufacturing and when able, began looking for a summer place. Lillian said why not go to Lake George, “The most beautiful lake in America!”. They did, and bought an old inn in bank default, which they tore down and built their “cottage” with enough room for the seven children (one of whom was my grandmother) and various visitors. That was the beginning, 1898, and along came 23 grandchildren including my mother. My dad was also a summer kid, they met and were married in 1939. I was born in 1941 and have spent at least part of every summer at Lake George my whole life and consider it my home town. 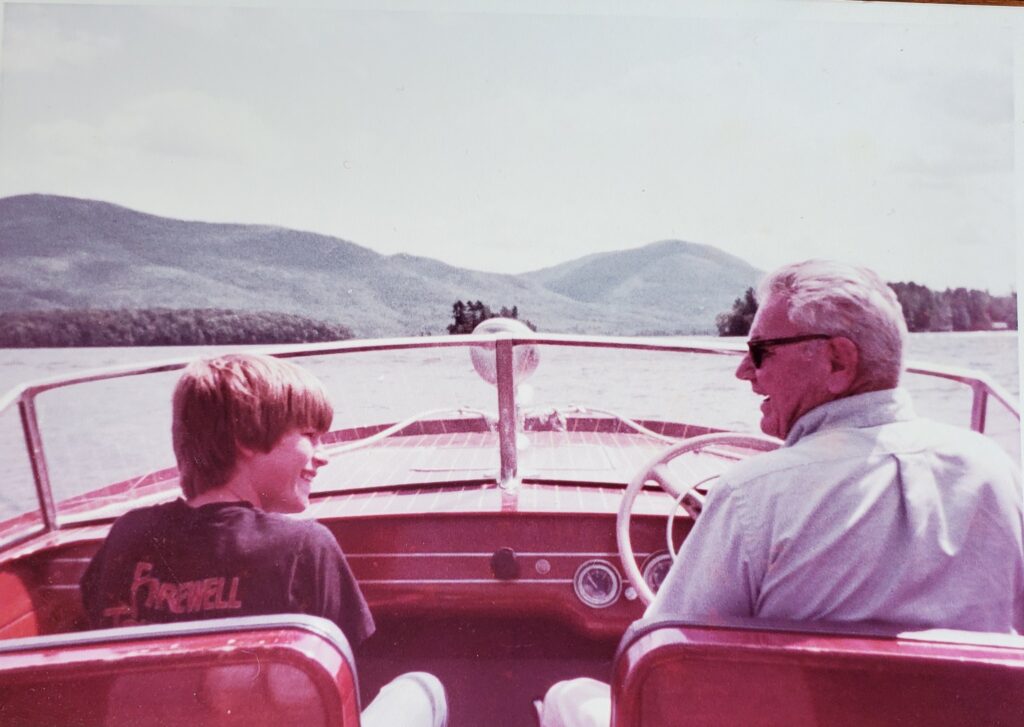 When Dad bought his Sportsman, water skiing was just beginning to take off. I, and my many cousins had done some aqua-planning (a single wide board attached to the towboat) but we were really excited to try skis because you could do so many more maneuvers with greater range. My Dad was a great sport and helped me, and so many of my cousins, learn to water ski. One of my cousins was slightly disabled and had a balance issue. Dad spent one whole afternoon until he finally made it up! The next day he showed up with a bottle of my Dad’s favorite spirits. That was 1954 and I can relive almost every moment of those early years, so lucky we were. 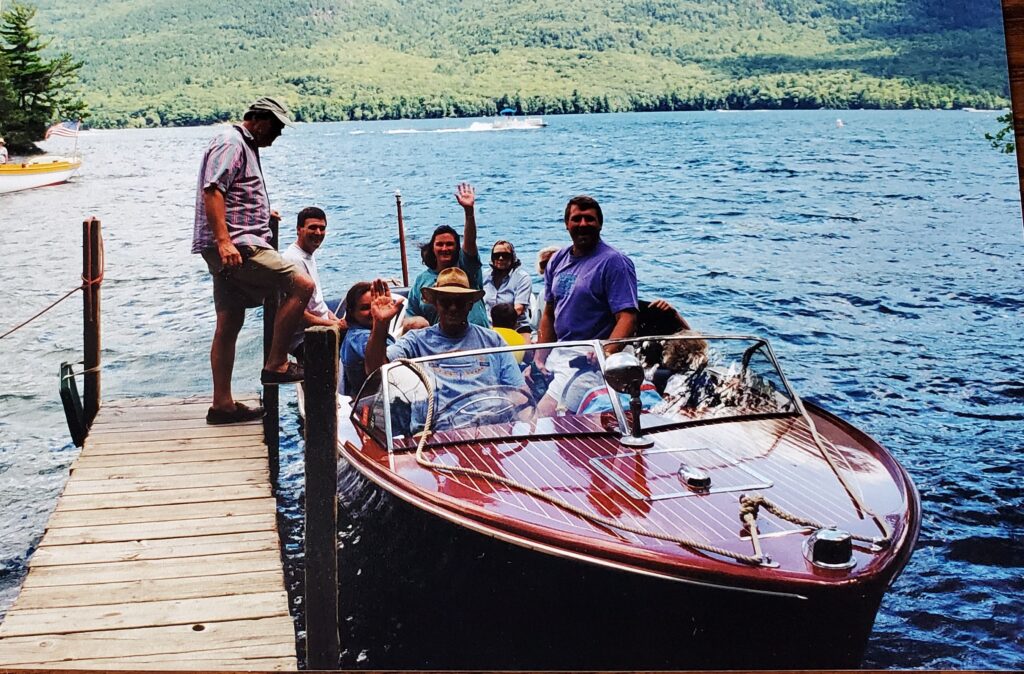 The Chris Craft Sportsman was one of the most usable boats ever designed. The true utility style allowed all around access to all areas of the boat. Anchoring access and fishing was easy from bow or stern. Anyone who has had to navigate or dock in a storm can appreciate the ability to move around in a hurry. The center engine hatch makes a fine table for picnics or cocktail cruises, and then be ready for work or play the next day. Highlander served many years as a ski boat, fishing boat, cocktail cruiser, picnic boat, ferry boat, access to secret hunting spots in the late fall and still looked good to make an entrance to a dinner dance or lakeside dining. She did it all, and with nary a complaint, and that straight six was a mighty engine for its size!

My Dad and Mom loved the boat and would go out early evenings, day time lunches with their kids and grandkids, nighttime cruises under the stars, picnics with family and other adventures from late spring to late fall deer season. My Dad died in 1988 and the Highlander became my joy, and, responsibility. Fall is my favorite time on Lake George because most of the other folks are gone. One day I made a evening cruise to our favorite lakeside tavern and sat down at the bar looking over the water. An older gent, next to me, looked over and said “I know that boat.” I looked more closely and recognized the man as the owner of the marina where my Dad bought his boat. I replied, “You sold that boat to my Dad”! He didn’t remember my Dad’s name from 45 years ago but he remembered the boat. We reminisced a bit about the old days and how boats have changed and heartily agreed, “They sure don’t make them like they used to!”

After years and years of pretty active use a lot of things needed to be done. Several refinishing jobs, an engine rebuild, etc. The family had gone to an outboard for a ski boat many years past so the Highlander became a pleasure boat only. My wife, Wendy, and I lived in Bolton for about 10 years and enjoyed many hours of boating. We moved to Camano Island, Washington 15 years ago but always visit Lake George a couple of times a year and always enjoyed the boat.

Several years ago I was alone on a last cruise Columbus Day weekend, just putt-putting along the west shore taking in some of the new building going on. Suddenly, out of nowhere came a Grady White, whose pilot was blinded by the west sun. He avoided a T-bone hit at the last moment, but hit the Highlander broadsides at a high rate of speed. No one was hurt, but all parties were well shaken. The Grady had a scratch, but the Highlander’s port gunwale was splintered from bow to stern. I limped back and had repairs done over the winter. She looked fine but never drove the same. My 3 boys were now grown, had families and major responsibilities of their own, less time and less access to Lake George. Here I was in my mid seventies, not quite as active and not sure I wanted to be giving my boys a headache to deal with; so I sold the Highlander to a boatbuilder to put her back in shape and give another family a chance to enjoy one of the finest all purpose boats ever made and, hopefully, back on Lake George. We will go back and I will be on the Lake, but I have to sign up to use a family boat, now.
Oh well, that’s called aging gracefully! We are like a club, now, pay dues and share the many expenses to keep the old family place going.

Although we no longer own the Highlander, our extended family owns a younger sister Sportsman (1953) that has been restored several times, been repowered and serves our many members most faithfully. We also share an outboard ski boat and the “Grand Dame” of our fleet – an 1896 model – 36′ ELCO electric launch that my great grandfather used for fishing lake trout. She still plies the waters with grace on an almost daily basis in summer, as family members can’t wait to get on the water for an evening cruise when they get to the Lake. So here we are, 120 years later, still driving wooden boats on Lake George. There’s no greater joy for me! 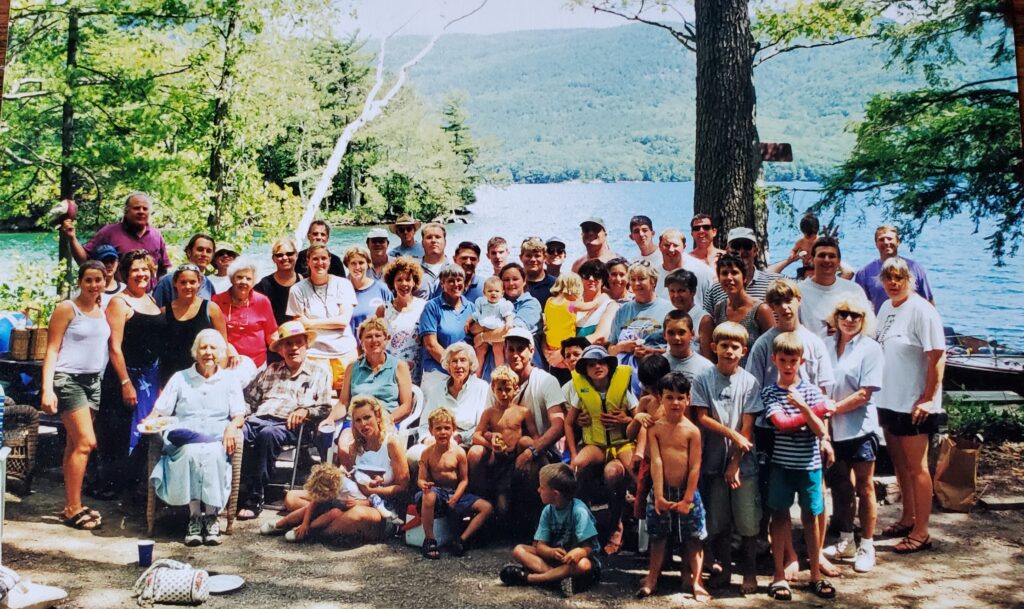