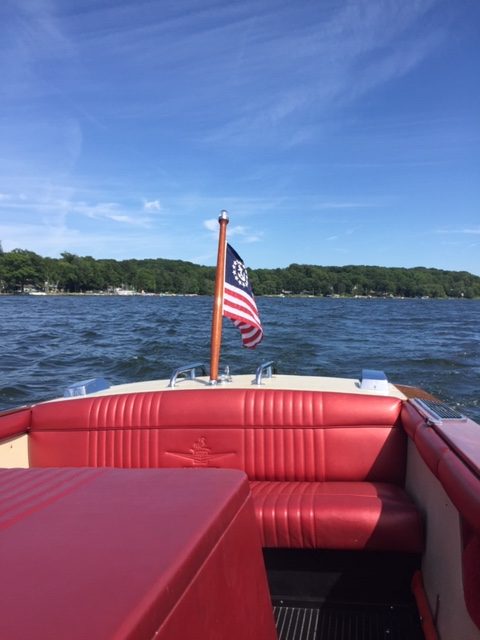 My husband Dave has been a boat lover all his life and began boating on Chautauqua Lake in a 13′ Boston Whaler when he was just 10 years old. His love of boats continued at the Chautauqua Lake Marina where he worked summers as a teen. He can still rattle off the name of every boat that came through there and the owners’ names!

Much to his mother’s dismay, he purchased his first wooden boat, a 1967 Century Resorter, at the age of 19. She could not stay mad at him for long though when he sold it two weeks later and doubled his money! Then began the hunt for the next one. Soon he had a 1965 Century Resorter , but little did he know that the next boat he bought would be one that he would hang on to. so unusual for this guy who changes boats as often as he changes underwear!

In the fall of 1983, at the age of 23, Dave received a call from a friend, a fellow Century lover, about a boat that he saw listed for sale in the Buffalo News. The boat, a 17′ 1968 Century Resorter Fibersport was located in Grand Island. Dave went to look at it and found it to be in great condition. It all started to make sense when the owner explained that it had spent its entire life hanging protected from the elements in a boat house on the Niagara River. The seller was only the second owner and lived right next to the boat’s original owner! Dave couldn’t believe it! When he asked why it was being sold the man explained that after breaking his leg skiing behind it, his wife had given him an ultimatum sell the boat or else! It’s here that I should point out how lucky my husband is that I’ve never said that!

Dave purchased the boat that day and then had to quickly find a buyer for his 1965 Century Resorter. Luckily he did, and off it went to a fresh water lake in Texas. And so began a labor of love. Though the boat was in good shape, many evenings were spent as we were dating, fussing with one thing or another, including entirely stripping and refinishing the mahogany in 1984. I soon learned more than I ever wanted to know about old boats! I remember Dave saying that this boat was the best of both worlds. It had mahogany decks but a fiberglass hull. So cruising in it felt the same as cruising in a woody with its 235hp Chrysler engine and the classic throaty sound, but a fiberglass hull was so much easier to maintain!

As we were dating the boat became our haven, a way to take off on our own. We seldom drove a car if there is a way to get there by boat! Countless hours were spent on that boat on Chautauqua Lake, swimming and water skiing, and the boat holds a lot of memories for us. The most memorable one was when Dave proposed to me in it, on July 3, 1985. The same friend who originally saw the ad for the boat was in on the surprise and helped Dave execute his plan. Dave had the ring around the neck of a small teddy bear and in my surprise I almost threw it overboard! Needless to say, I said yes…and for the last 35-40 years we have traveled around NY, PA and OH to boat shows together. We also both became very active in the show on Chautauqua Lake each year, which is sponsored by the Chautauqua Lake Twin Tier Chapter of ACBS. As life got more hectic, if I couldn’t join him at a show, our daughter Chelsea did. She now she has Century blood running through her veins too!

In 1986, less than a month before our wedding, while the boat was docked at the Chautauqua Institution dock over the Fourth of July weekend, someone lost control of a Hobie Cat sailboat as they were headed out and managed to hit our boat. The front spreader stay of the sailboat cut across the bow and shattered the mahogany in such a way that it made repairing it impossible. It was heartbreaking, especially after Dave’s hard work just 2 years before. But we commissioned a well-known local craftsman to replace the ruined mahogany and sand and refinish the entire boat.

The rest of the boat’s life has been uneventful, though it has seen its share of early morning smooth as glass conditions and gorgeous evening sunsets! Most recently Dave refinished it again in 2013 in the Boat Shop at the Lawson Center Museum in Bemus Point by far the best conditions he had ever had for working on his first love. If you are ever near Chautauqua Lake, stop by and visit The Lawson Boating Heritage Center, a true gem of boating history.

The boat has earned many awards over the years. It is still in its original condition and looks very good for its age. But we are proud to say that it is not a ‘trailer queen’ and does not sit on a trailer between shows. It has been in the water each summer since it was purchased and is used and enjoyed! Our children learned how to ski behind it and continue to when they can. My only regret is that we never came up with a good name for it, we just couldn’t decide on one we both liked and wanted it to fit well on a transom divided by the ladder. So we have a boat with no name. In hindsight, I think it should have been First Love.