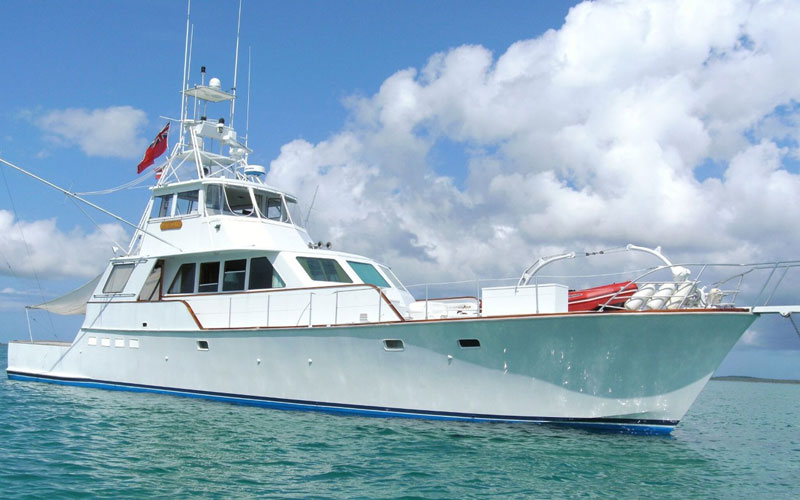 Detailed history of the Anacay written by Captain Don Carson

The Expedition Vessel Anacay was commissioned by Martin Tiernan (the owner of Wallace & Tiernan Instrument Co. a precision gauge manufacturer for NASA and the U.S. Military).  She was designed by Daniel McCartney (a protege of Jack Hargraves), and constructed at Lantana Shipyard from 1968 to1970.

Lantana Shipyard was a major builder of military gunboats and patrol vessels, but only constructed a total of 4 yachts during the 40 years they were in business.  As a result of their military experience, they constructed the Anacay to a much heavier or higher quality standard than a normal yacht would be of equal quality to a Lloyd’s of London A1 (Blue Chip Standard).  The materials used throughout the vessel are all highest grade military spec and are typically not available for use on private yachts.

When launched in 1970, she was named the “Tom Kat” and was considered to be the largest and fastest vessel of her type ever constructed. As she was built originally, she was 72 feet long. She was later lengthened to 80 ft to increase the size of the cockpit and allow room for a 1200 gallon live bait well, and an 8 person hot tub.

Due to poor health, Mr. Tiernan was unable to make much use of the vessel before he became very ill.  The “Tom Kat” was placed on the market in 1971.  She attracted the attention of noted “Rat Pack” performer Sammy Davis Jr. and he arranged to charter her for a period of 2 years, while he appeared regularly at the Sheraton Yankee Clipper and several South Miami Beach Hotels.  Sammy lived aboard during this period, at Bahia Mar Marina in Ft. Lauderdale.  By all accounts, he entertained lavishly onboard and hosted fellow “Rat Pack” members, including Frank Sinatra, Dean Martin, Peter Lawford, and Joey Bishop at many of these soirees.   Sammy had a Fender electric piano installed in the main salon, where he spent a lot of his private time aboard writing songs and scoring his musicals. 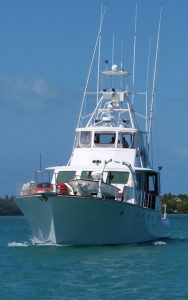 In 1973, when Sammy Davis’s charter agreement was over, the “Tom Kat” was purchased by Scott Chotin Sr. of Chotin Towing Company as a corporate yacht for his marine transportation business. She was renamed “Patsea VII” under Chotin’s ownership.   Mr. Chotin kept the ‘Patsea VII” from 1973 till 1977, and cruised and fished her all over the Caribbean and Central America.  She also served as the Race Committee Boat for the 1977 America’s Cup yacht race, the year that Ted Turner won the Cup in “Courageous” competing against Australia’s Alan Bond in “Australia”. A watercolor of this historic race hangs in the Salon of the “Anacay” today.

In 1977 the “Patsea VII” was offered for sale and was purchased by Frank Nataros and renamed the “Anacay“.   Within a few months of purchase, he took the boat to Roscioli’s shipyard in Ft. Lauderdale and had the cockpit lengthened an additional 8 feet, and had the bait well and hot tub added at this time. At this time there were many significant upgrades and improvements made to systems and machinery at this time.  All of the work was overseen by a former head mechanic of Pan-Am “Flying Boats”, Haines Burris.  Mr. Burris engineered every system to have full redundancy, and that the “Anacay” was a truly self-sufficient vessel, able to spend long periods away from civilization.

The “Anacay” we have today is the result of several generations of engineering knowledge that has gone into her by Mr. Burris and subsequent engineers and captains.

The “Anacay” had a number of firsts incorporated into her.  She was the first vessel with underwater lighting, a cockpit mounted helm and controls for fishing.  She is the only vessel that has ever had a glass bottom baitwell, which allows viewing the sea floor in clear water.  She also was one of the first yachts to have an onboard reverse-osmosis watermaker, which converts sea-water to drinking water.  She is the only vessel ever equipped with piezo-crystal underwater sound transducers, which allow broadcasting of fish attracting sounds over a large area.

The onboard alarm system was the first integrated circuit alarm panel used on any yacht. This system monitors all the safety items of the vessel and its machinery at all times and displays on a panel in the pilothouse. Recently we upgraded this already wonderful system to integrate with a cellular communication terminal, so that the Captain can monitor the safety of the vessel, even when he is not aboard, or even in the same country as the “Anacay“.

Due to diligent care by Mr. Nataros and the Captains who have cared for her over the years, the “Anacay” remains in structurally perfect condition today and is fully surveyed yearly by the President of the Florida Chapter of the Association of Accredited Marine Surveyors, Mr. Richard Learned.

Since 1977, the “Anacay” has had a number of well-known guests and celebrities on board.  Ladybird and Linda Johnson were aboard for a trip to the Bahamas in the 1970’s. Ralph Evinrude and Francis Langford were guests aboard during that period as well.

Operating as the escort vessel for Susie Maroney’s record swim from Mexico to Cuba in 1998, the “Anacay” carried Ms. Maroney’s medical team and camera crews. While in Cuba, Cuban leader Fidel Castro had dinner aboard the “Anacay” along with Ms. Maroney and her team.

In 2011, the former Vice President of the Republic of Georgia, David Kezerashvili was aboard for a fishing trip.

Of course, there have been numerous others aboard, such as members of Duke Ellington’s Orchestra, well-known TV celebrities from Latin America, and a few U.S. State Senators.

Today the “Anacay” remains a prime example of a long-range expedition vessel that is always ready to embark on any adventure that one could dream of.  With range to cover the entire Caribbean basin to the coasts of South America, there is nowhere we cannot go exploring!

Every boat has a story!

No matter what size or what era, keeping the history with the boat will add to its value and intrique.
Share the story of your boat by emailing the story and pictures to [email protected] or Click here to submit pictures or news from your chapter events.