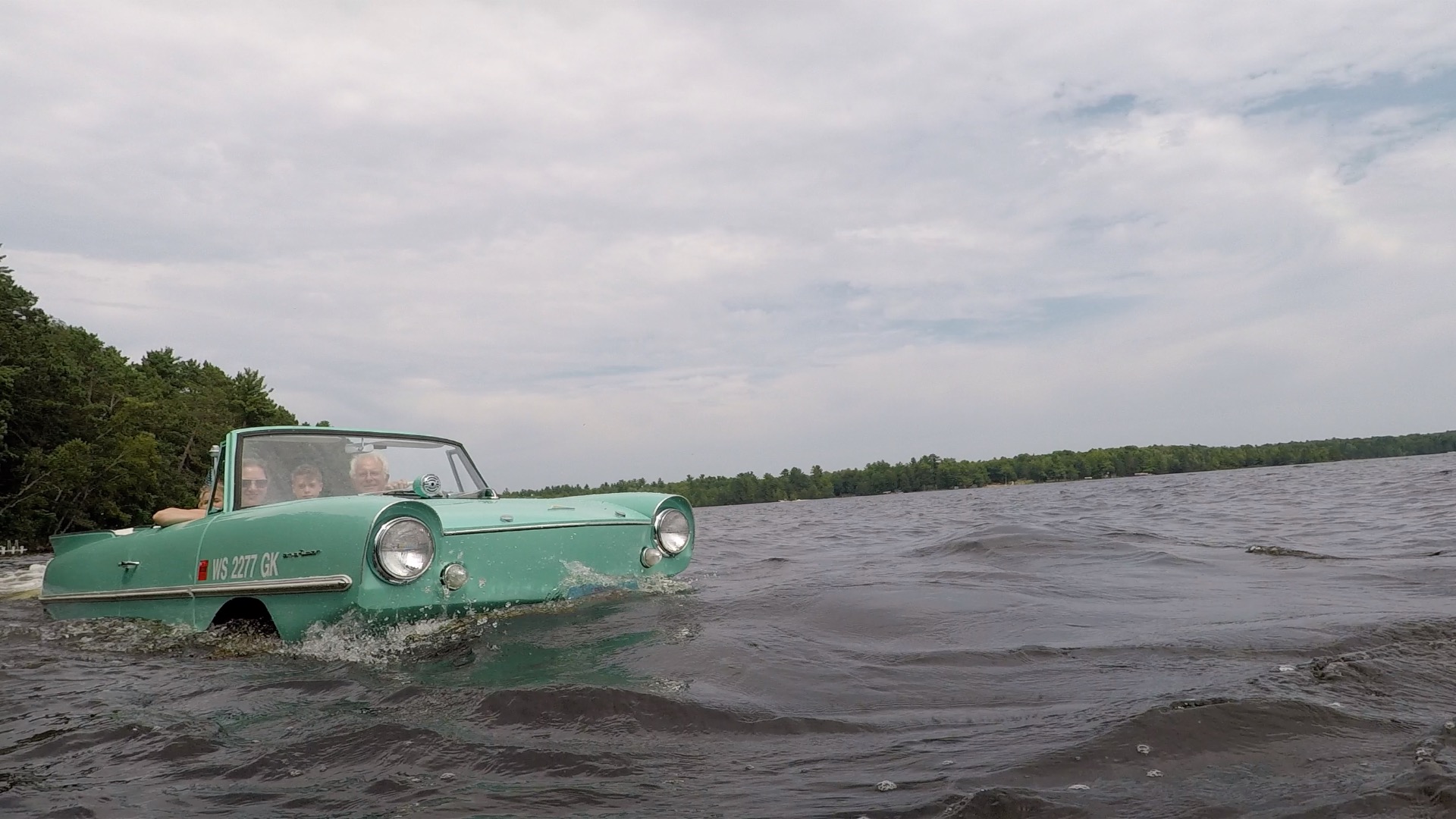 by Tom Thayer member of the Blackhawk chapter

One day, in the spring of 1999, my wife was looking at the local Shopper Stopper paper and casually mentioned that there was an Amphicar for sale at an upcoming farm auction a little South of Evansville, WI, which is only about 20 miles from where we live.

My first adventure was transferring the title and getting plates. As it turns out, with an Amphicar, everything in this respect is double (except the sales tax). You need a car title and plates and you need a boat registration and numbers. Then, I found out you need both a car (antique) insurance policy and a “boat with all boat registrations” policy because in reality, as soon as the wheels leave solid ground, it is a boat and must comply with all applicable boat laws.

Although in good shape, my new Amphicar had sat in a barn for about 16 years, at least that is our guess from the registration, so we decided to have it restored. Luckily, there was a restoration shop in Northern Wisconsin that I had worked with in the past that did both cars and boats.

We soon had a fully swimmable (term Amphicars use for going in the water) and drivable Amphicar. That is when we realized, other than the initial fear of driving your car into the water and praying it floats as advertised, they are a blast to own and you are instantly the center of attention when on land or in water in your little 14’6’’ Amphicar.

For the first 10 years or so, when we were out swimming, most people thought we had taken a car body and mounted it on a boat. Only few people around our age would recognize that it was an Amphicar. Nowadays, after some crazy auction sales and Disney using heavily-modified Amphicars to give rides at Disney Springs, most people recognize them.

We are asked many times what it is like to drive an Amphicar. As has been written many times since they were introduced in 1961, an Amphicar doesn’t do driving or boating very well. The Amphicar model number of 770 meant the top speed in water was 7mph and the top land speed was 70mph, all of which is powered by the 43hp triumph herald engine. I can tell you from experience, however, that anything over 60mph on land is a little scary.

We soon came to realize the worst part of swimming in an Amphicar is going out on a hot day. Even with the top down and vent windows open, you get very little air flow due to the high wind shield and 7mph speed, so many Amphicar owners use beach umbrellas to provide shade on a warm day which further draws attention and adds to the many boats hang around.

Over the years, our Amphicar has given us countless hours of fun. The little Amphicar spends many more hours in the water during the summer than on the road. It is not unusual for us to end up at a landing after a swim and then giving kids and adults the thrill of actually driving a car right into the water, doing a quick ride, and equal fun or, for some, relief, when you pull the boat back out to become a car again.

Recently, I was contacted by Land’s End to see if they could use my Amphicar in their Christmas catalog. It was a little nerve-wracking and fun for me to give Santa and Mrs. Claus a 5 minute lesson on how to drive an Amphicar and then send them out on a lake for the photo shoot, all while I rode in the photo boat giving instructions by radio.

When they got back to the landing, I had for some reason in my mind the thought they could hop out and I would climb in and pull it out. However, reality hit me that they could not get out while still in the water. Mrs. Claus, who was the driver, had never driven a stick shift car before but did a great job driving out with instructions and shifting by Santa Claus and some encouragement from me standing in the water next to the car. All was good and it was a fun day. I never realized how big of a production a catalog photo shoot can be.