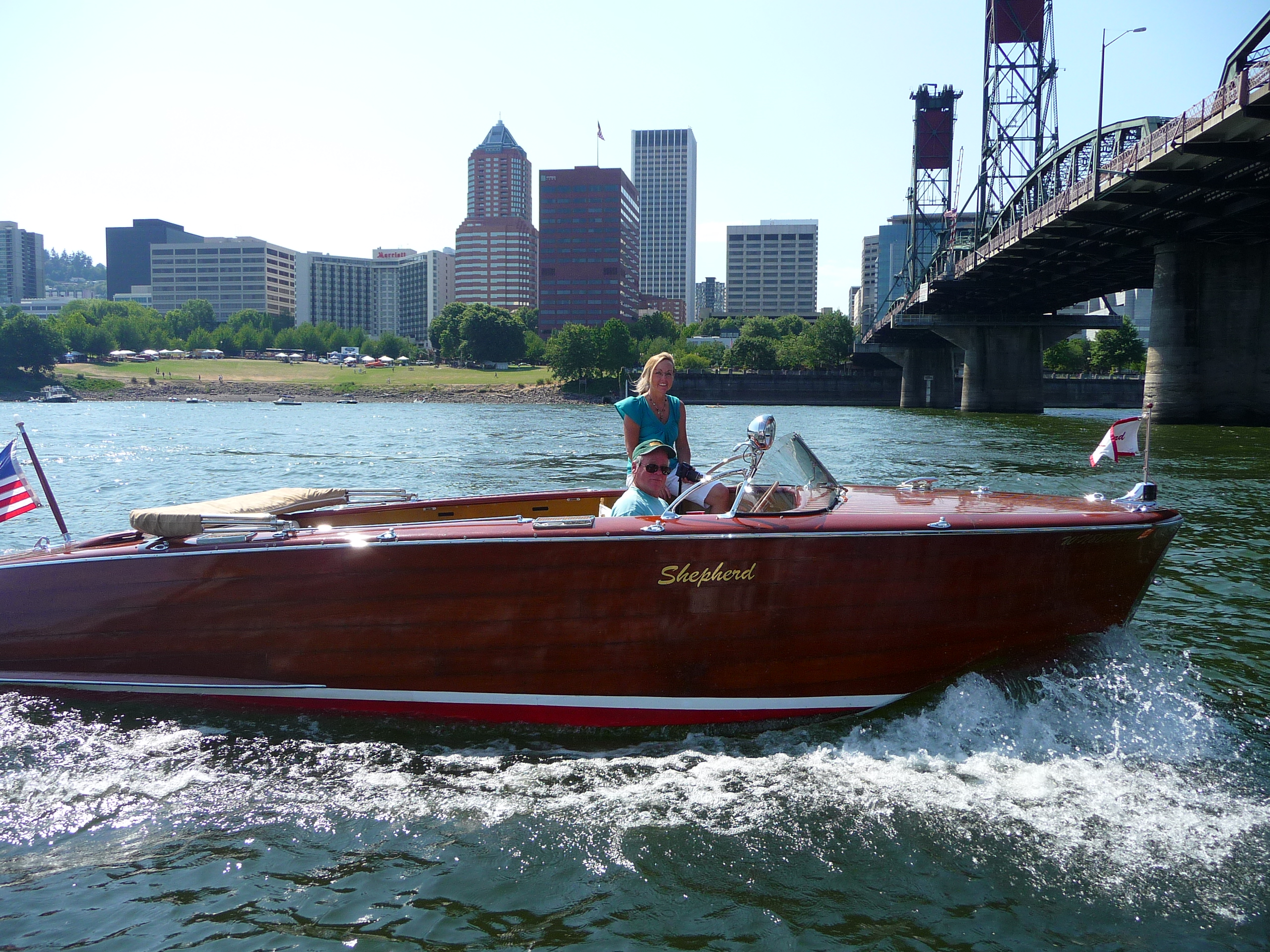 By Tom and Janet Cathcart members of the Pacific Northwest chapter

We bought our 1953 Shepherd model 110-S Sportsman runabout in the winter of 2006 from the second owner, who had just brought the boat back from Bobcaygeon, Ontario to his home in Lodi, California. This was the Shepherds first trip into the United States, as it had spent its first 53 years on the Kawartha Lakes. George Griffith owned a GM Dealership in Sacramento and would spend two weeks each summer at his cabin on Pigeon Lake. He found the Shepherd sitting in a marina with the engine frozen as it had sat for years after the original owner passed away. After he got the engine running again, he would put three or four hours a summer on it, then put it in storage until the next year. Finally selling his cabin, George pulled the boat all the way back to California.

I had never owned a boat before, so a 22’ mahogany runabout powered by a Chrysler Imperial Special Marine Hemi was a huge first step to say the least. My wife Janet and I decided to jump in with both feet after seeing a beautiful wooden runabout on Lake Washington the previous summer. “Boy that looks like fun” I said, and I was hooked!

I made George an offer, and a week later my friend Peter and I were driving down to Lodi. We hooked up the trailer, made a stop at a Home Depot to cover the boat in stretch wrap to protect it from road rash and rain, and headed for Seattle.

Since then my goal has been to use the boat every summer, performing maintenance and restoration during the winter months. I’ve re-wired it completely, overhauled the engine, replaced the fuel tank, re-upholstered the interior, and much more. I finally had to replace the bottom after sixty-three years of faithful service, and there isn’t a part of that boat I have not been intimate with. The Shepherd is such a stable craft due to its weight and high freeboard, and the engine has plenty of power to spare.

Our favorite summer experience is to rent a waterfront home on Lake Coeur d’Alene with some old friends and use the Shepherd almost every day to explore. We also enjoy Flathead Lake in Montana and Lake Okanogan in British Columbia.

We look forward to many more years with HUCKLEDYBUCK.