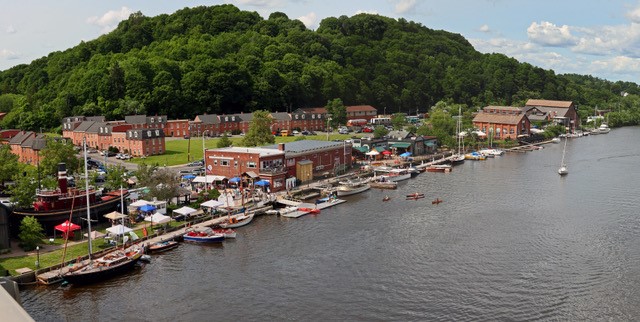 On Saturday, June 22, our Hudson River Chapter participated in the first annual Maritime Festival held at the Hudson River Maritime Museum. This event combined our annual boat show with the museum’s third annual Boat Building Challenge, a nationally sanctioned event, and a large mix of activities and vendors. The turnout was estimated at 1,100 attendees.

Friday night, a cookout meant to bring together the separate groups, kicked off the combined event. Dennis and Holly did a great job with some welcome help from both our club and HRMM. Positive comments were heard from many corners.
We had 17 boats on display, 3 of those on land. We varied from a 13-foot hydroplane to a 55-foot Cheoy Lee sailboat, with a 38-foot Chris Craft cruiser (our only cruiser this year) several lapstrake boats, sleek runabouts, classic fiberglass, and beautiful utilities in attendance. We even had one boat show up from Pennsylvania, rather unannounced (HRMM had had some contact with them,) that was a small Viking-styled lapstrake boat strung from the raised stern pole with piano strings and used to make musical sounds with the boat-in-the-water as the sounding-board. Unique, to say the least! (themusicalark.org)

One common reaction from the public was they were glad there were several different activities to enjoy. One could tour the grounds from the boat-school building, where activities geared for children were centered, through the classic boats at the dock, to the boat-building area under the 9W bridge near the tugboat Mathilda filled with sawdust and the sound of saws. The courtyard in front of the “Barn” was filled with tents from vendors and nautical sponsors, such as the Sea Scouts, the Elinor restoration and the Saugerties Lighthouse. HRMM offered boat rides to the lighthouse and on the solar-powered Solaris.

The weather cooperated and we were able to hold a boat parade that occurred just prior to the launching of the finished skiffs from the Boat Building Challenge at the rowing dock. Our awards ceremony was held Saturday at 5 pm on the front porch of the “Barn” and we adjourned to a private room at Savonna’s restaurant (a short walk away) for our dinner. Gene Porter, a past President of national ACBS and our chapter liaison, attended our show on Saturday and our dinner, he commented that our show was more interesting than many shows, with a greater variety of boats and a beautiful venue in the museum and the Hudson River itself. He threw out the possibility of a national board meeting being held at our show one year, as it was this year at Lake Hopatcong.

Steve and Vickie Young attended a debrief at HRMM last week. The combined committee felt the event was an overall success, the public’s reaction was positive, and the event is planned for next year at the same time. The committee, Steve and Vickie included, felt there were several factors that could be improved. For one, we made it clear that we want to return to our spot near the gazebo from our location on the porch of the barn. Although it was shady and cool – it was too far from the action. All felt overall signage could be improved. Sound systems were used but could be used still more and be better coordinated. The group also agreed that more could be done to encourage the public to walk the docks and to feature activities around the classic boats.

We had our doubts and worries going into this new event, at a new time of year for us, but all considered, this seems to be the way forward if we are to continue to have a chapter boat show. There was still a lot of work to be done, by a rather small number of our members, which is a situation on which we must improve going forward. The weather was great, the show successful, and once again, with fingers crossed, we got it done!