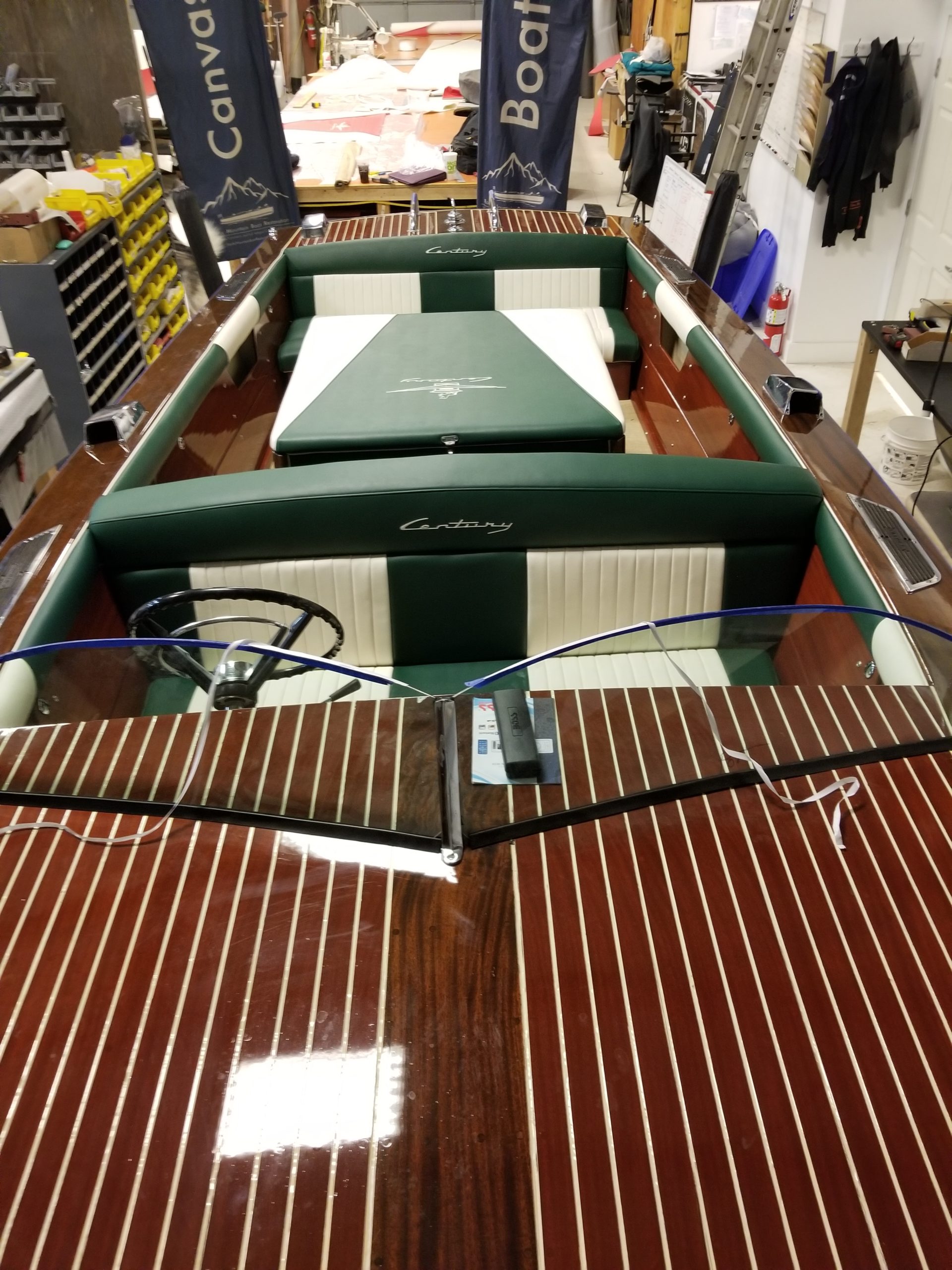 Newly married and newly retired we see a woody sitting on a trailer in Steamboat Springs, CO. Guess what? This 1968 Century Resorter is for sale. After a one-hour roaring “sea trial” she is ours. Yes her 440 ci Chrysler Marine 300 engine with dual exhausts roars like a loin.

Oh my gosh. What had we done? We realized the trailer was useless, the bottom was rotten, and the engine needed a bit of work. The waterski modifications were NOT pretty. A weekend clinic for Century Boat owners in Cincinnati taught us that we were in over our heads and that we needed to find the Rocky Mountain ACBS chapter and to meet some skilled wood workers. Wayne Spaulding and Bill Tordoff of “Wonderful Woodies” in Frisco, CO became our new best friends. A 5200 bottom, new topsides, and a new windshield and we were ready to go. The engine spent a few months in another shop.

Bob and Chris Braaf took us under their wings and said we should go to Lake Geneva for the International Show. What an introduction to antique boats. We wanted to take our baby, named Idlewild, to an International Show. Table Rock was next, and we had so much fun. Coeur d’Alene, Idaho followed with a week on Flathead Lake, MT where we met Bob and Betty Moore and their marina of antique boats. The Braafs said, “You have to do the pre-cruise.” So, we stopped on Priest Lake, made more great friends including John and Ann Ross, and were thinking we needed a lake cottage.

The short story is that the next month we bought a mobile cottage, a 42-foot Sabre FB with two 500 hp diesels and cruised the east coast for six summers. Yes, we are spontaneous and a little wild. That chapter ended this fall and we pulled Idlewild out of storage.

Idlewild looked a little tired so we called Wayne. He said that we needed to take her to Roger Miller at Rocky Mountain Boat Restoration in Colorado Springs, CO. What a great find. Roger and his partner, Tony Troxell, are magicians and detailers, extraordinary. They tore apart the seats finding many surprises including an old dress used for stuffing. They rebuilt, reupholstered, redid the dash, the bolsters and the motor box, replaced the windshield, touched up the varnish where our old cover had rubbed and made us an absolutely perfectly fitting new cover to protect our now beautiful boat.

Monday, January 13, 2020 we picked up our gorgeous baby and delivered her to the Denver Convention Center for the Colorado Boat Show. Her reception was overwhelming. We are so happy and so proud.