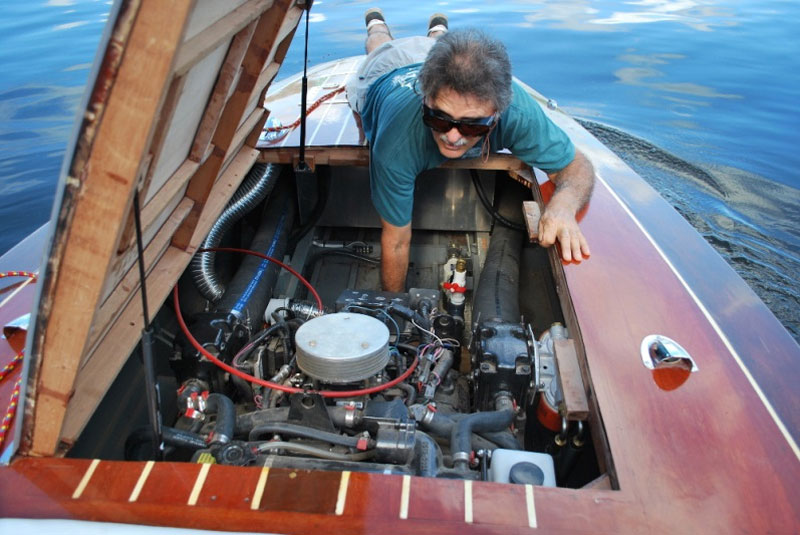 Safe Boating week is May 18th through May 24th. For more information, visit www.safeboatingcampaign.com

As we are all well aware, we have that highly explosive liquid on board many of our old boats call gasoline. That liquid is very capable of vaporizing and releasing fumes. These fumes are heavier than air and will settle down in the bilge. Opening the hatch cover prior to starting the engine allow you to do the sniff test (which is important), but when the boat is tied up at the dock there will be very little air movement in the engine compartment.

Our old boats depend on natural airflow ventilation to remove fuel fumes, which of course only happens while underway. The only sure way of getting the fumes out of the boat is by sucking them from the bottom of the bilge.

Brent Howard, a professional boat restorer, has provided us with this article about building an inconspicuous but effective bilge blower for our boats.

I developed a habit of raising the deck hatch, or motor box, prior to starting an engine, but anyone can be forgetful, distracted, or be in a hurry, so I designed a bilge blower system for my 1946 Sportsman 25. The natural passageway for air between the ribs was quite large and directing a blower into it would not be as effective as ducting the air directly from the bilge to the outside through a 3 inch duct as is done on newer boats. In this case, there are two mid-ship vent openings on both sides. I used only one vent on the port side, so I still have the natural ventilation system in place on both sides while under way.

The space between the ceiling boards and the hull was 2 inch rather than 3 inch so a 2 x 6 rectangular duct was built to approximate the same volume of air as a round 3 inch. Since the space was fixed at the top and dropped below the deck boards, a single piece non-flexible duct couldn’t be installed, so a two piece duct was made to fasten together when in place. The duct is made of mahogany and aluminum ro 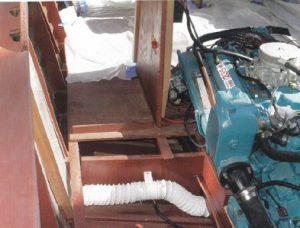 With very little modification, this bilge blower concept will work on many different types of vintage boats including cruisers. In regards to a runabout weather it be a double or triple cockpit, a similar installation can be done by venting out one of the rear deck vents. You can make it inconspicuous as was done on the utility by making a similar mahogany duct going up to the opening. Since most deck vents are located medial to the covering boards, you would need to install a second 3 inch hose fitting and then attache a short flexible host to the vent opening. If you want to be more creative you could fabricate a wood elbow to the vent.

The main thing is we want to make this as easy and simple as possible so everyone will have an effective ventilation system on board without it detracting from the boat’s original appearance.

For those of you with 6-volt systems there are 6-volt blowers available.