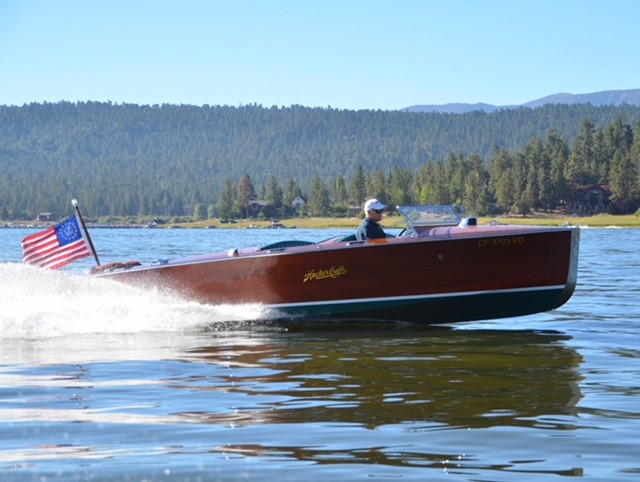 By Tim Vanderveen member of the Southern California chaptert

While scanning the local Craig’s List looking at classic cars, I was surprised to see listing for an old Hacker Craft. The boat had been in a lean-to in South San Diego for 25 years. The owner passed away, his grandson ended up with the boat with no interest in restoring it. Little did I know what the restoration would entail!

With no history available from the family of the owner and very limited historical information on Hackers, my networking led me to the legendary Tom Flood. Turns out Tom had owned the boat, restored it in the early 50’s, and sold it to someone in San Francisco. The boat was named Miss Sarah and was a Lake Tahoe boat. When I acquired Miss Sarah a completely disassembled, rusty small block V8 engine was strewn about the hull, along with years of accumulation of leaves, oil soaked rags, and other trash. The bright-work was in surprisingly good shape. The keel looked like a snake, and the chines were broken and separated from the frames, and most of the frame members were split or broken. The bottom had not been replaced and the ground was visible from numerous holes.

Following a 2 year restoration, the now named Dutch Treat lives at Big Bear Lake in Southern California. Only 6 original frame members and the stringers were reused, with the stringers reinforced with addition of 3/4 inch marine plywood on both sides to support repowering with a Mercuriser Black Scorpion 5.7 L, 330hp EFI engine plus all new drive train. The current Hacker Craft factory representatives were awesome with advice, SOP’s, and technical advice. Dutch Treat has a cold molded West system bottom and the starboard, port and transom planks along with the top deck are epoxied to Okoume plywood inner layer.

Coming up with a name for the Hacker was a challenge. Realizing what we were spending for the restoration, my wife announced that she was travelling dollar for dollar for what I was spending. I said, ” you mean like when we were dating and we went “Dutch?”” Being of Dutch decent also helped!