I’ve Got You Babe 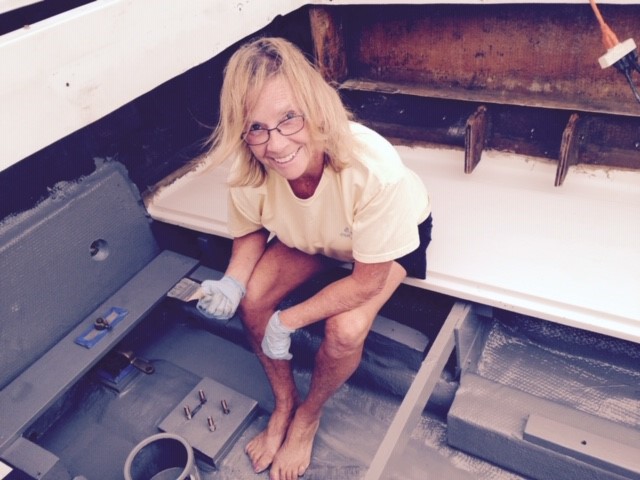 by Glenn Feilhauer member of ACBS

We found this particular Lancer as we were passing through Celoron, New York in October of 2011. We were on our way back from New Jersey to Cincinnati after visiting my wife’s family. When we heard she was for sale, and the Gentleman that found it, and posted it was not interested, we had to stop and look, and of course we all know how that turns out. At the time we had a 1974 Lancer, but it was not the original. Wrong seats and it had been repowered with a Chrysler 360. Since we also have a 1973, 36’ Commander Sport Fish, the 1973 Lancer caught my eye.

She was in fair condition except for the motor. She was apparently stored in a building with a leaky roof and the motor box was gone due to rot, which means the motor took a hard hit of water.

In 2015 we started to bring her back to life. We had the original 350Q motor and the 33P Paragon rebuilt, both by professional shops. While the motor and transmission were out, I cleaned and painting the bilge. The inboard Lancers have tunnel hulls, which creates two sharp cornered low spots, but they only have one drain hole on just one side. After cleaning and sanding the two corners, I filled the low areas with epoxy, installed another drain plug in the other side. Of course, there were other things the rust got the best of, besides the running gear. The screws and inserts holding the helm chairs down, and If you ever owned a Lancer you know what I’m talking about. I manufactured stainless steel plates with drilled and tapped holes and slid them under the floor to fasten the pedestals. The floors were solid, the hole boat is solid. The interior seating had been changed to blue at one time, the vinyl had become hard and brittle, some we changed back to the original white. New wiring, gauges, dash and glove box door.

Little Babe II runs great, (our 36’ is I Got You Babe IV), sounds fantastic and gets some nice looks. She is still a work in progress, and fun.