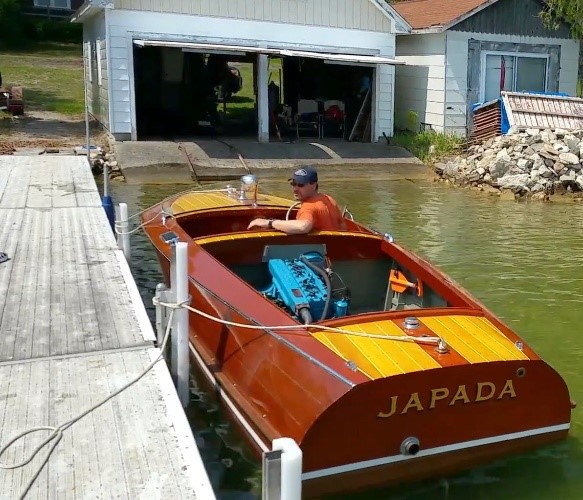 by David Arscott member of the Water Wonderland Chapter

Why and How does my Dad, starting in 1948, a 45-year-old full-time employed mechanical engineer at GM ‘Pontiac Division’, married and father of three young children (JAmes 6, PAtrica 14 & DAvid 11) start to build a ‘speedboat’ from ‘scratch’?

Having not asked my Dad ‘the Why’ at the age of 11, my answers are mostly from my Dad’s family photo albums and listening to my Dad and Grandfather on our many summer vacations. The most impressive photos show my Dad at ages between 9 and 13, along with his Father and his Uncles, at a hunting and fishing camp. These trips were made several times and in different boats. Thus, my Dad’s early impressions were of these great adventures by boat as well as living close to the Rogers City ‘fishing docks’ where his Father was also part owner of the ‘fish’ boat the ‘Rambler’.

The ‘How’ is all documented when he restarted his boat-plan search which had stopped during WWII, in a replied 1948 correspondence from John L. Hacker Co., Marine Architects and Engineers in Detroit with subsequent blue-print plans for an 18’ runabout for the price of $20. Photos and an old yellowed manila-mailing-folder that my Dad had stuffed full of receipts, many dated 1950-1951, for different sizes of light red Philippine Mahogany, white oak & long leaf yellow pine: all delivered by NY Central rail to Rochester. Also included was a Railroad receipt for a 120-pound steel tank used to steam-heat the necessary boards for fitting to the boat frames. I remember this vividly as it was my job to get the fire started under this slightly angled horizontal tank ready for steaming. All the lumber was ‘dressed-out’ at a local plaining mill and then using his Craftsman’s band-saw, with me holding the end of a long piece of Mahogany, my Dad would gently guide the plank for an appropriate cut to the finish. Stores in the nearby areas supplied different fittings, along with gross boxes of brass screws.

You should note the Japada ‘Hacker’ is a Utility and not the Runabout which the blueprints originally showed. My Dad also ‘docked’ the Japada for several summers at a Marina on the Salt River which flows into Lake St Clair, where we would go fishing or just pleasure boating.

By the 1960’s the Japada was put on a dolly in our shore boathouse, making for easy launching with steel rails and ties going into the lake. For the next 28 years, as we all married and had children, everyone now was able to enjoy this classy beautiful designed Hacker boat either working to paint the bottom or varnish the decks and sides or fishing, water-skiing or just touring the lake, especially on those beautiful evening sunsets! With the passing of my Dad, the craftsman, the boat builder and the fixer of all things necessary, fell to me, however my full-time professional work was such that I was unable to maintain her for launching and it remained setting on the dolly for the next 20 years.

Then on my retirement in 2008 my first goal was to get the Japada’s almost 60-year-old single plank bottom still in good condition but now very dried-out, replaced with a double bottom using the popular CEPES and 3M 5200 method, also to replace some fore-deck, check the engine and general varnish. August of 2008, along with family members, we were able to get the boat out of the boathouse and onto a new custom-designed ‘Loadmaster Trailer’ for its journey to the ‘Classic & Antique Boats’ shop in Hessel MI. In June of 2009, my wife, Allison and I decided to show our newly reconditioned Japada in the 17th Annual Presque Isle Wooden Boat show held at Presque Isle Harbor on Lake Huron. Our efforts were rewarded with a Third Place in the 18-20 ft Utilities Class!