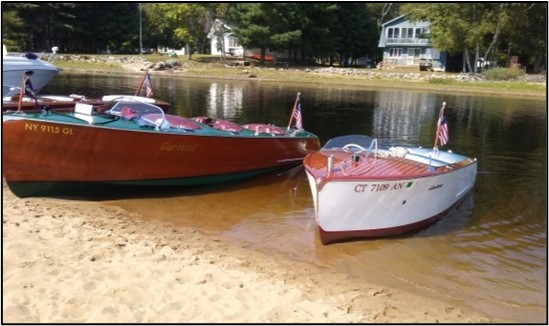 The 1946 Ensign is a 16 foot utility built as an entry level economy boat powered by a 93hp Chrysler “Ace”. Most of the production boat hull topsides were painted white with varnished transom and decks. Very few were totally bright because of the absence of quality mahogany at that time. A few were also produced with Chrysler “Crown” engines. Jazz is the basic version.

I have known Jazz for more than twenty years. Her resurrection was done by ACBS members and friends John Telash and the late Jack Barron. 95% of her original wood remains. To me, Jazz had been the “Gold Standard” for the model.

In the spring of 2018 Don Spring, a mutual friend, was having a moving sale, and others contributed consigned items to the sale. Upon viewing the list of sale items, I noticed that there was an “Ensign” listed. Remembering my “Gold Standard”, I asked how it compared to Jazz. When the answer came, “It is Jazz,” I immediately said, “I’ll buy it.”

Gail and I have taken Jazz to several shows throughout New England and New York State and Jazz has received 1st Place or Best Gar Wood awards at all of them. Not bad for 20 plus years since a major overhaul. I have done mundane tasks such as painting the bottom, replacing the flooring, repairing the fuel pump and some wiring, as well as restoring the trailer. She has been used for two years as our pleasure boat as well as a show boat.

The pictures below show her ready to go, beached off of Sebago Lake in Maine on the 2018 Wine Country Fall Trip, and pleasure-riding underway on Keuka Lake.