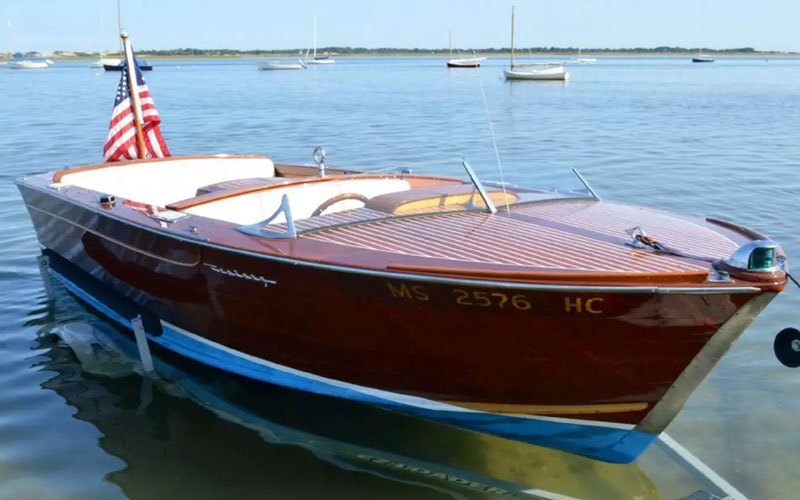 Talk about a boat with a story!

This 1961 Century 17′ Resorter which belonged to President John F. Kennedy will now be an attraction at the Shangri-La Resort on Grand Lake of the Cherokees in northeast Oklahoma.  This is the lake where the Heartland Classics Chapter holds their annual boat show and cruising event each September.

Guernsey’s Auction House held a “Kennedy Era Auction – Oct. 7, 2017” which included many memorabilia items at a time commemorating the 100th anniversary of JFK’s birth. Among those items was the Century Resorter.  The following story was posted on “The Drive” by Kyle Cheromcha and shared here with his permission:

The Massachusetts-born Kennedy was always known for his love for the sea, and the many pictures of him sailing in the waters off Cape Cod have helped shape his image as a vibrant, youthful politician in the popular memory. That’s on top of his heroic service as a patrol boat captain in World War II, the family’s near-mythic connection to Hyannis Port, and the small sailboat he owned since childhood that’s permanently on display outside his presidential library. All this to say: The man knew his boats.

In 1961, shortly after JFK was inaugurated, his father Joseph Sr. won the Century Restorer [sic] in a church raffle and gifted the boat to his son. The auction listing says he did so because JFK’s younger brother Robert already had a Century of his own, but we’re willing to bet being president helped out a little bit. The boat was named “RESTOFUS,” a wink at a boat Joseph Sr. once named “TENOFUS” in honor of the ten Kennedys at the time.

The 17-foot Restorer [sic] is made of “deeply varnished” mahogany and remains in showroom condition thanks to a pair of restoration projects in the late Eighties and mid Aughts. That’s good, because the listing quotes Ted Kennedy as saying that JFK “was a little rough on it” and drove it “like it was PT-109.” The original engine, likely a Chrysler flathead six-cylinder, has been swapped out for a 1986 Ford 302 V-8, so recreating this water skiing scene below featuring both Ted and Bobby shouldn’t be a problem for the new owner. 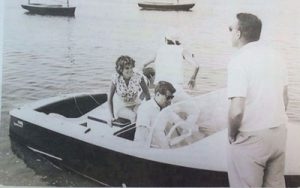 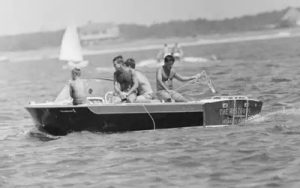 Sam Dangremond in the Town&Country digital news added this history of the boat in an article prior to the auction on Sept. 26, 2017:

“RESTOFUS” got its name as the Kennedy family expanded, and following JFK’s death in 1963 it became the property of Senator Edward M. Kennedy. The senator sold it in 1984 to the Bilezikian family, the founders of the Christmas Tree Shops. In 2015, the Bilezikians sold the boat to Peter Eastman, who also purchased a Kennedy sailboat. 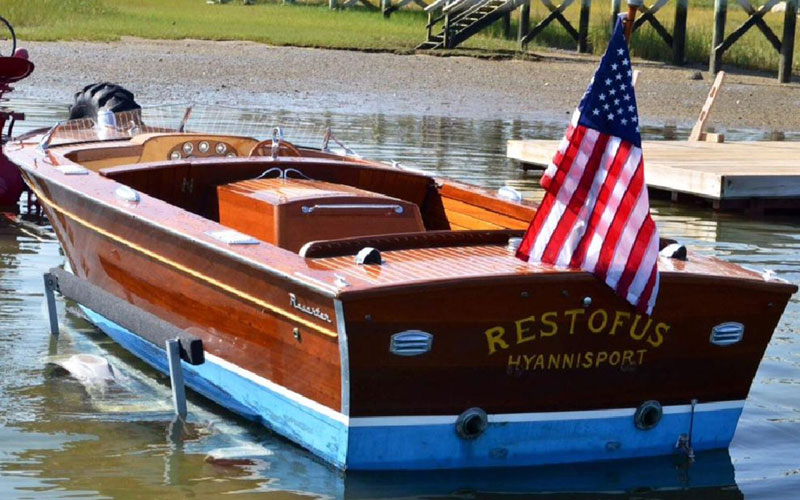 Restofus will be part of a display at the Tulsa Boat Sport & Travel Show January 29 – February 4, 2018, and then will be at her new home at Shangri-La Resort, Afton, Oklahoma.