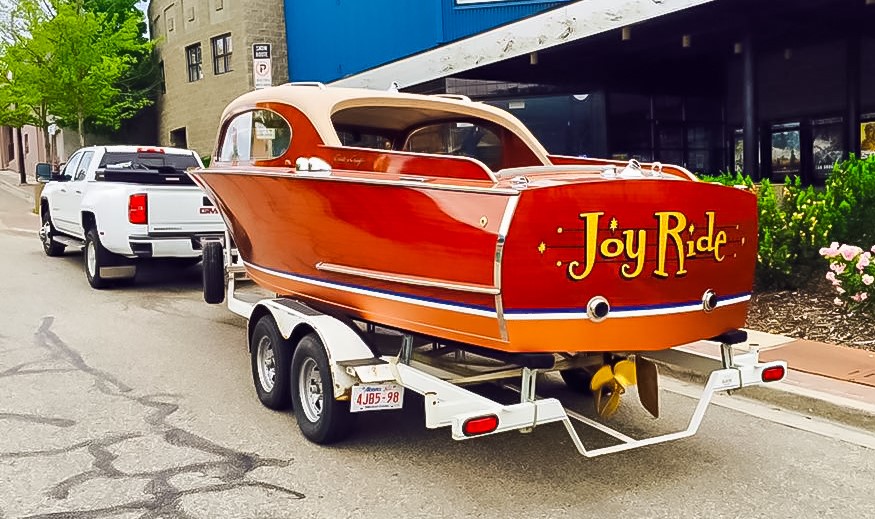 Note: Story and photos submitted by Kelly Williamson, a member of the Okanagan and Pacific Northwest ACBS Chapters.

Wanting to escape the forest fire smoke of the BC Interior, a last-minute decision was made to head south. The Oswego Heritage Council & Columbia Willamette Chapter ACBS 2018 Wooden Boat Show was scheduled for August 18 and 19 and we wanted some sunny skies. The Joy Ride was on. Jenni Medina and I packed up the 1954 22’ Chris Craft Custom Sedan and headed down from the Shuswap, British Columbia.

The Oswego Boat Show was an impressive event.  Special thanks out to Wendy and Bob Nelson for doing a wonderful job of organizing and hosting. The commitment of local sponsors made the event very inviting and reasonable in cost.

There was an impressive selection of boats to view and the public turnout was very good.  In addition to the boat show the Oswego Heritage Council ran a car show concurrently. Lake Oswego is a small but very interesting city south of Portland Oregon with a private lake that was made from a naturally occurring channel of the Tualatin River that is now expanded to 395 acres.  Development around the lakeshore started at the turn of the century and now includes some large estates, many of which have spectacular stone boat houses. The Lakeshore Inn overlooking the lake and the boat docks were very nice.  There was a very good selection of shops and restaurants within walking distance. With a stroke of good fortune the wind direction changed and we had some warm sunny relatively smoke free days to enjoy.

Joy Ride did well at the show and was awarded “Best Utility” trophy.  I think that was a really big honor when compared to a U22 called “Mike” restored by Mike Mayer.

Warren and Tracy Olson were awarded the trophy for “Best in Show” for their 1955 21’ Chris Craft Capri “Blondie”. It was an honor to stand with Warren as he and Tracy had been very nice with us as we have begun venturing into the Pacific Northwest area from Canada for boat shows.

The winner of the ‘People’s Choice” Award went to an excellent 1961 Shepard V-110 (Canadian built).  It was brought from the PNW Chapter and is owned by Scott Mason and Patty Ludden.  It was really nice to have another opportunity to show with them.  Those Canadians did build some cool boats.

Steve and Louise Leslie from Mission, British Columbia brought down their 1942 Chris Craft Special Runabout.  This was awarded the trophy for “Best Amateur Restoration”.

On the Friday before the show, the Oswego Heritage Council held a reception at the Oswego Heritage House Museum for boat show and car show participants and sponsors.  The Heritage House Museum was a very charming venue for the social events, within walking distance of the Lakeshore Inn and docks.  It was a great opportunity to meet some new people and chat with some previous acquaintances.  On the Saturday there was a wonderful catered banquet for the boat show awards presentation.  The social events for this show were very well done and we were very happy to have had an opportunity to participate.

Although I am not overly happy that we have returned to the smoky British Columbia interior, I am very pleased we made the decision to escape to the Lake Oswego Show. It was a very good show that we will remember fondly.