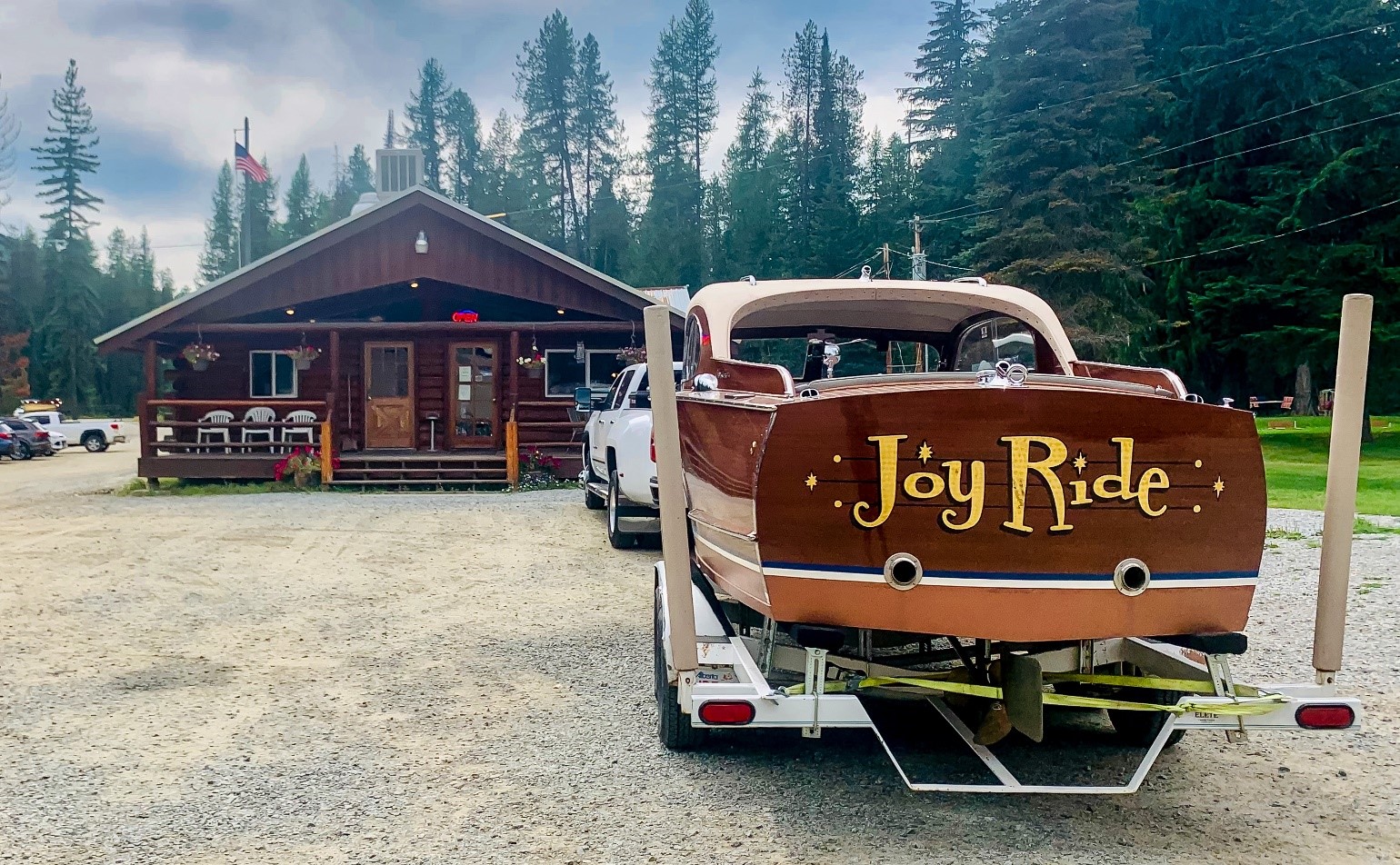 by Kelly Williamson member of the Okanagan and Pacific Northwest chapters.

In August, Jenni Medina and I had made a last minute decision to get to some ACBS shows in northern Idaho. With the help of the good people of the Inland Empire Chapter we were able to get in on the Coeur D’Alene Classic Boat Show. We had a great time there and very much enjoyed exploring. Located about an hour drive north of Coeur D’Alene is picturesque Priest Lake. The Priest Lake Dry Rot Show was conveniently scheduled the following Labor Day long weekend running Friday August 30th through Monday September 3rd and turned out to be the most fun we have had at a show yet.

Between the Couer D’Alene show and Dry Rot we spent a few days in Sandpoint touring Lake Pend Orielle with our 1954 Chris Craft Custom Sedan. A half hour drive from Sandpoint is Nordman, Idaho. This was the closest town to the show venues and the location of the welcome reception and spaghetti dinner the following evening. There was a small group of buildings identified as Nordman from the highway. I almost missed it. There isn’t much civilization in that part of Idaho but this turned out to be the right place, the Nordman Resort. It was pretty rustic and quite interesting.

The Priest Lake Dry Rot show was organized by Kathy and Brian Fair. It was also impressive how much community involvement there was with this show. There were events at three different lakeside resorts. A large number of waterfront home owners helped out with the poker Run. There were many locals out on their docks for the Sunday boat parade.
Through chatting with people, it was clear that there was a strong community spirit and the local community valued the show weekend.

The weather for the show at Elkin’s Resort couldn’t have been nicer. Elkin’s resort was originally built in the 1930’s by Ike Elkin after the original owners defaulted on a loan to build a hunting and fishing camp. It has charming modified versions of the original structures that retain the classic feel.

Awards from the balloting earlier in the day were announced. Again, Brian Fair did a great job of presenting. The Captain’s Choice Award went to Mollie, a 1932 18ft Garwood Runabout owned by Nevil Bryant. I voted for that boat and was very pleased to see it win. The Captain’s Choice award was a framed Priest Lake burge. The Dock Walker award went to Ithaca, a 1948 17ft Century Sea Maid owned by Riley Anderson. The Dock Walker award was a handmade dock line plaque. The last award presented was the Dry Rot award. It was presented to Michael and Carol Hutchison for their years of service running the Dry Rot event. The Dry Rot award was an oversized stainless steel flask. Congratulations to the very deserving recipients of these awards.

On the Labor Day holiday Monday there was a continental breafast at Werner’s cabin with another opportunity to socialize. The remaining boats then gathered in front of the Werner’s cabin for a trip to Upper Priest and the annual hot dog roast at Geisinger’s Campground. The trip took the boats though the narrow and shallow 2.5 mile Thoroughfare.
As the hot dog roast began to wind down, some of the boats moved out for a tour of Upper Priest. Jenni and I decide to follow suit and take Joy Ride for a cruise. There was no visible development around the upper lake and the pristine beauty of the forest and mountains was spectacular. We had debated not staying for the last day and getting a head start towards home and I am very pleased with the decision stay for the trip to the upper lake. We very much enjoyed spending our last day here further exploring beautiful Priest Lake. We were reluctant to see our adventure end so we spent an extra hour cruising around in Joy Ride.

Jenni and I really enjoy the ACBS club ativities at the chapter boat shows. So far, Jenni and I would agree that Priest Lake Dry Rot has been the most fun. The day we arrived we did some cruising about and got a big wave from Ron and Jane Yandt from their dock. The Poker Run was a very entertaining way to spend Saturday morning. I very much enjoy challenges and games. The dinner Saturday evening at Werner’s Cabin was very well done. The food was really good and Dick and Louise Werner were very entertaining to chat with. Show day Sunday was a great opportunity to meet some of the other boat owners and visitors at the docks. I love chatting about boats. The trip to Upper Priest and the cruise through the Thoroughfare and around the upper lake was very scenic and a great adventure. We were fortunate enough to meet some really great people. If you enjoy getting out, using your boat and having fun we highly recommend Priest Lake Dry Rot show.