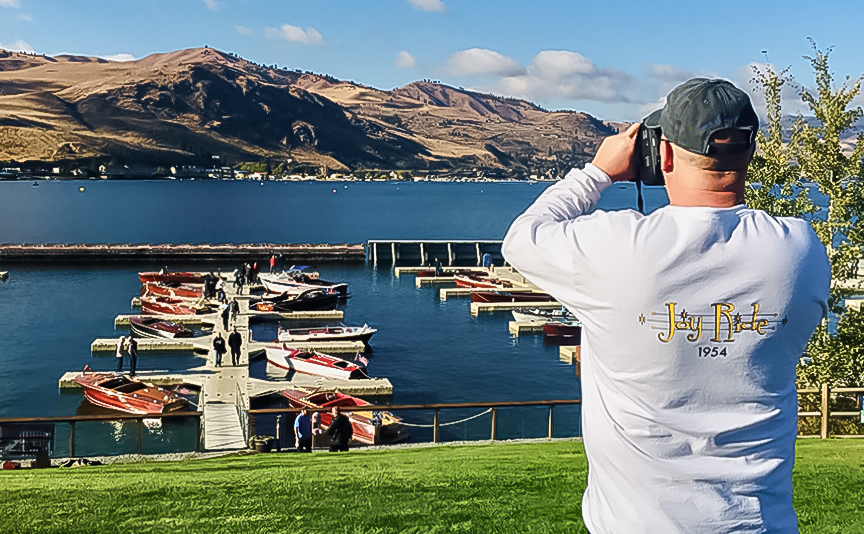 Note: Story and photos submitted by Kelly Williamson, a member of the Okanagan and Pacific Northwest ACBS Chapters.

As I’ve said before, one of our favorite late season boat shows is Mahogany and Merlot on Lake Chelan, Washington. This year the event was held October 5th to 7th 2018. Mahogany and Merlot is an ACBS-PNW sanctioned event done in cooperation with the Hydroplane and Race Boat Museum. The event includes vintage hydroplane racing, an ACBS show (affectionately referred to as Mahogany Row) and a classic and custom car show.

This year again the weather at Chelan was delightful and it was a treat to be away from the unseasonably cold weather north of the border.

There was a pre-show event where a group of 7 boats spent a few days traveling 50 miles up the lake to Stehekin. We thought it was great fun.

Mahogany Row was presented at the Don Morse Memorial Park and Marina. This park, in the city of Chelan, is well suited to a show like this.  There is a parking lot above the marina where there was a beer and wine garden, the Vender Village with nice souvenirs and such, and the classic and custom car show. A grassy slope overlooking the Marina was an excellent place to take in the sunshine and look out over the lake.  It had an excellent view of Mahogany Row and the race course used for the hydroplanes.

For a good many hours Saturday and Sunday the folks from the Hydroplane & Raceboat Museum operated races on a course on the Lake.  There were Limited and Unlimited Class events for the public to see.  In total there about 30 brilliantly restored hydroplanes on exhibition. The Unlimited Class hydroplanes utilized WWII aircraft engines like V12 Packards and Rolls Royce Merlins. From the grass slope there was an excellent view of the enormous rooster tails as the boats roared around the course. The sound of unlimited hydro’s is unmistakable and extremely loud. Watching the hydroplane races was reminiscent of the televised events I watched as a youth in the 1960’s and 70’s, back when professional hydroplane racing was very popular.

The night before the show it rained and the next morning my boat was covered in water spots and insects.  I got up early to clean Joy Ride and present it for the show. Joy Ride is a 22ft Custom Sedan I bought from a nice gentleman from Lake Arrowhead California.  It now resides at the Shuswap Lake, British Columbia.  When I bought it, it was in original condition. Everything worked well but the original 130hp M engine left this heavy boat underpowered.  It had a very old 5200 bottom that was having problems. One weekend it nearly sunk when the bilge pump float stuck. If it weren’t for my neighbor noticing a problem it would have been lost in about 100 feet of water. On another evening, cruising around the Shuswap Lake, the spot light shorted and all of the boats wiring burned up. I gave up on the old girl and sent it out for a complete rebuild to Chris Casparis of Sea Sonic Boats. It now has a mahogany plywood hull with planks laminated overtop.  For a boat I want to use regularly, this style of modern wood hull is far superior. We installed a 2015 Mercruiser 350 cid engine and it will now keep up with any of the classic boats. The interior was redone to replicate how it would have been originally. The colors and materials chosen are as close to the original as can be found.

Joy Ride was well received at the show and was voted People’s Choice. It was an honor for Jenni Medina and I to receive the award and I am continuously surprised by how many people appreciate the vision we had for this boat rebuild project.

Warren Olsen brought his 1936 Triple Deluxe from Auburn, Wa. This was the first showing for “Shezz Available” since he completed the 2-year restoration. Warren’s boat was awarded the Skipper’s Choice.  It was very clear to those that know technical stuff about boats that Warren did a beautiful job. The craftsmanship and attention to detail was appreciated.

My favorite aspect of the 32 Triple was the upholstery. It looks luxurious and the color works very well with the boats color scheme.

The Kid’s Choice award went to Miss Madison.  This was another one of my personal favorites from the show.

Photos of some other boats at show follow below.

Campbell’s Resort is one of the sponsors of the show and most of the people that come to the show from out of town stay there. The resort has a lovely beach that is very well taken care of.  The scenery around the lake is stunning.  Campbell’s is pretty unique in that every room has a balcony and a lake view. Some of the rooms at the northwest end of the resort overlook the pit area used for the hydroplane racing.  All of the rooms had a good view of the race course on the lake. I really enjoyed time spent on the balcony checking out the activity and soaking up some warm sun and beautiful mountain views.

It appears that the town embraces the event and the public turnout seemed really good.  The city supported a parade of the hydroplanes on the Friday before the show. Along with the parade was a street party in the city center.

The Chelan area has some pretty nice facilities for the show. I really liked that I could park my truck and trailer at Old Mill Park in Manson about 10 miles away and leave it there for the entire event.  The boat ramp at Old Mill Park wasn’t crowded and was one of the best boat ramps I have had an opportunity to use. We launched from there to go to Stahekin.  We were then able to boat to Campbell’s Resort and the show site at Don Morse Park and Marina. It was also possible to boat to the banquet at the Sunset Marina across the lake.  Campbell’s Resort is adjacent to the show site and an easy walk back and forth. The resort is also centrally located in Chelan and there were many good restaurants and shopping within walking distance. There is also a winery tour available to show participants.

The Mahogany and Merlot show has become a favorite late season boating event. The pre-show trip up the lake to Stehekin was a lot of fun. We are thinking about bringing our children with us next time. The Boat show in Chelan was well done and we had fantastic time. It is getting late in the boating season and there is some potential for bad weather. This was our third visit and I would say the weather is usually spectacular, at least by Canadian standards. We really enjoy running away to Lake Chelan. It was again an excellent opportunity to visit with some friends and make a few new ones.