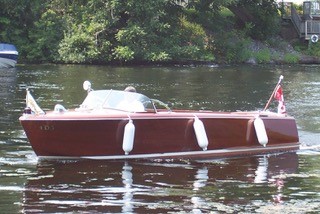 Laura Grace is a 1951 Shepherd Utility built at Niagara On The Lake, Ontario. Her license, 4D3, is original indicating that she was the third boat to be licensed at Coaticook, Quebec. She still carries these original numbers.

I have had no success in finding the original owners. However, I have managed a sketchy history. Apparently, the boat was found in a barn at Coaticook sometime in the early 70s and subsequently moved to The Lake of Two Mountains, west of Montreal. The owners of the boat could not be confirmed. She seems to have disappeared until the 1980s when she was reported missing and found adrift. It is believed that she was claimed by the County and then sold to a car dealer in Chateauguay, Quebec. It seems to have traded hands several times before being sold to a gentleman in Brockville, Ontario in 1989. He kept the boat until 2006 when I purchased it. 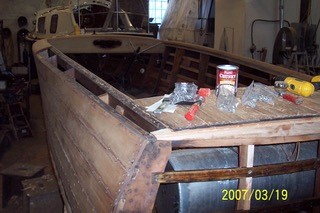 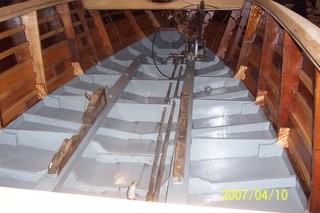 When I retired in 1998 a dream of owning a Canadian built mahogany boat became an active search. Checking out backyards, barns and marinas throughout Eastern Ontario, I finally found the 1951 Shepherd utility located at Ayling’s Marina at Merrickvile on the Rideau River. Like most dreams, you need help from others to make them come true. I knew very little about wooden boats but, I was willing to learn. Many thanks to Steve Flewitt, owner of Ayling’s Marina, who allowed me to store my newly, acquired boat while John Millar lent his expertise to her restoration. My good friend, Erwin Kelso, of Prescott, Ontario agreed to rebuild the original Chrysler Marine Ace engine.

Restoration began in January 2007. We removed the decking, replaced three starboard planks, the port cover board, two broken ribs and much of the transom. By spring, all that remained was sanding, staining and the application of several coats of varnish. The original bright work was cleaned and replaced. By July 2007 a beautiful restoration was completed and she was christened, Laura Grace. She took her place on the Rideau and is now enjoyed by family and many friends. 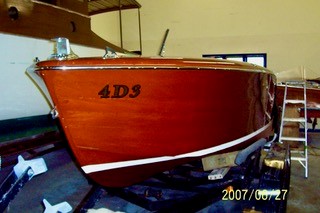 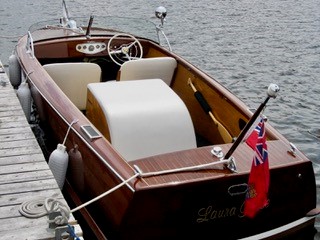 During the summer, Laura Grace is docked at the home of Joan and Bob Sweenry, on Mahogany Bay at Manotick, Ontario. After restoration she won, “Best Utility” in 2010 and the following year, “Best Canadian Built Boat” at the Manotick Antique Boat Show held at Long Island on the Rideau.

Between 2010 and the present Laura Grace has had a few adventures, some planned and some not. In August 2010 she was joined by several boats from Peterborough, Toronto and as far away as Lake Tahoe for a three day cruise to Montreal. We travelled down the Rideau to the Ottawa River, into Lake of Two Mountains, into Lake St. Louis and finally through the Lachine Canal to the Port of Montreal in the heart of the Old City. A big adventure for a little boat! Other trips have included a cruise up the tiny Tay River to historic Perth as well as several trips to downtown Ottawa to celebrate July 1 Canada Day on the Rideau Canal.

Laura Grace was nearly lost two years ago when spring floods caused our dock and boats to break free and float towards the Old Mill Dam. A very big thank you to the fine folks along this stretch of river who saw the boats in distress and set out to rescue them. They successfully pulled them to shore averting a major catastrophe. 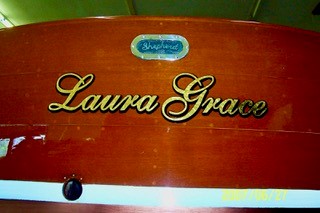 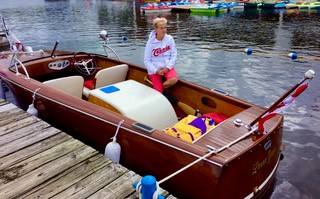