Learning is part of Boating 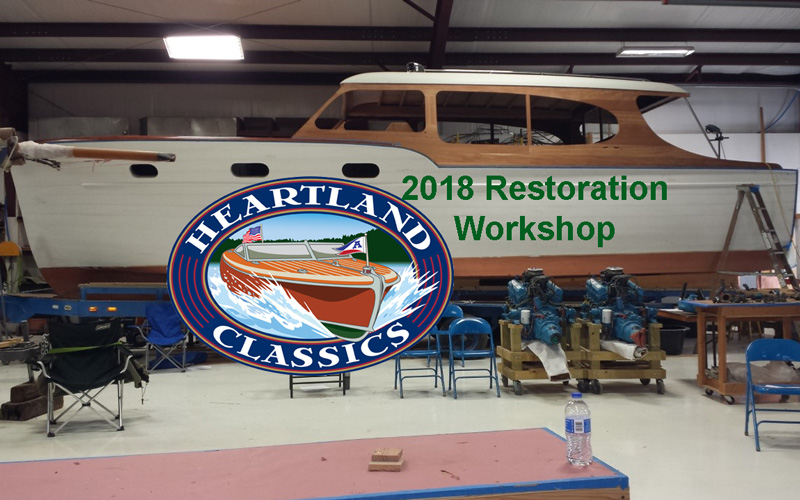 Like many ACBS Chapters, Heartland Classics has an annual Winter Restoration Workshop.  Each year the topics vary, participation is lively, and members feel better informed.

Gary O’Banion, owner of Performance Propeller, was the first speaker.  There was no shortage of questions for him!  A few examples of the Q&A:

There were many more questions.  In all cases, Gary visits with a customer about how the boat is going to be used and what changes are desired before he will adjust a prop. 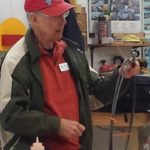 Dick Moist then demonstrated how to lubricate the steering, shift, or throttle cables in a boat without having to remove them. He used about 30” of fuel line hose which he tightly clamped onto the exposed end of the steering cable.  He then filled the hose with Marvel Mystery Oil. An air compressor coupler was then tightly clamped to the open end of the fuel hose.  The compressor at 60# forced the new lubricant through the cable conduit.  He said that at first, some dark sludge came out the other end, then gradually evidence of the fresh oil coming through.  Result:  steering as good as new.  Dick gave credit to searching on the internet for solutions to this problem.

Steve Howard from Howard Classic Boats explained the process of what the shop was doing to restore the 1947 small cabin cruiser lapstrake sailboat.  The Douglas fir planking was originally fastened in with square copper nails.  The owner of the boat wanted any refastening done with period correct square copper nails!  To remove planks which needed replacing, the old nails were either ground out or cut off.  The old planks became the pattern for the new plank.  The replacement nails were obtained from R&W Enterprises.  As each nail is set in the plank, from the inside, a rove set was used to broaden and flatten the point of the nail on the inside of the plank. 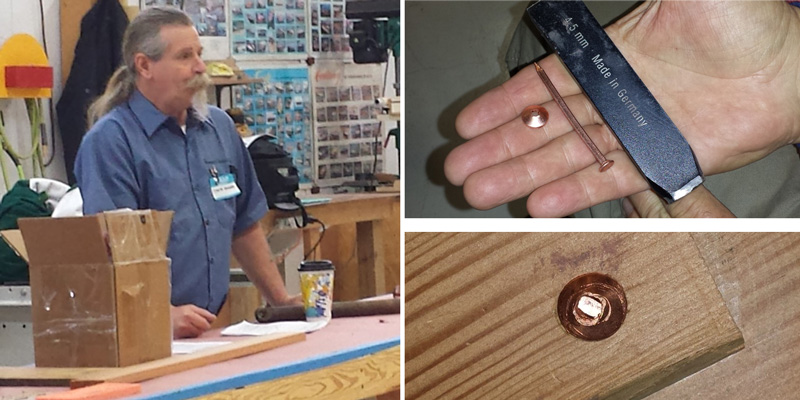 Bill Buchanan (from Arkansas) and Dan Diehl (from Oklahoma) found out earlier in a phone call that they were both trying to solve a similar problem.  At the workshop, they shared their two methods of replicating a plastic part for a boat from an original sample.

Bill needed to replace the “Arkansas Traveler” nameplate on a boat.  Using Legos, he made a trough large enough to hold the pieces of the original nameplate.  He secured those pieces in the bed of the trough as though they were whole, then sprayed them with a cooking oil.  From a “mold making” kit found at Hobby Lobby, Bill poured the mixture into the trough and let it set to form the mold for the new nameplate. From that same kit, he poured the liquid plastic into the flexible mold, and now he has a whole “ArkansasTraveler” for his boat which just needs a bit of paint to look original. 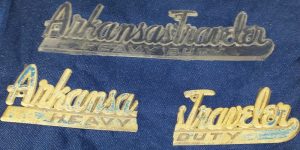 Dan had the same type of need, except he needed the plastic clips that hold the wiring inside of his Riva restoration.  Dan used commercial products from Reynolds Advanced Materials, Dallas to do the same process.

Tony Fure elicited knowing chuckles from the crowd as he described how his business of auto salvage in Kansas evolved into “saving” old outboard motors, and then old boats to use the motors, and finally now a wooden boat to have as a family project.  Logan Fure and Lane Fure with their dad are now in the process of restoring a 1958 AristoCraft Torpedo which they bought. It had been unused in a shed since 1981.  They brought the boat along to show their progress, and also to ask advice about how to proceed with a few “challenge” areas.

One highlight of each annual workshop is the sharing of newly discovered tools or techniques.  John Graf brought along two new “cool tools” to share.  The first is a GluBot from Fastcap.com.  This $7 plastic refillable bottle has a side channel with a spout which dispenses the liquid (glue or whatever) precisely and then ‘sucks’ the liquid back down the tube away from the spout when set down.  That always leaves a clean, dry, capped spout.

His second “cool tool” is a mesh sleeve to put over the ribbed vacuum hose and cords to keep them from catching or marring the edge of the boat as you work in the boat which drags the hose, etc. over the finished edge.  He found this on “The Tool Nut @ Amazon” or Festool Hose Cover Sleeve Kit.

Jodee Winkle from Moss Seat Cover in Tulsa, OK teamed up with Brent Howard to tell about the massive vinyl project done on the “Class of ‘47” (headline picture above).  Each year, the group observes the progress being made on Brent’s 1947 Chris Craft 36’ Double Stateroom Cruiser.  A ladder was provided for members to see the latest teak work done in the upper deck and the vinyl covering applied to the top.  Jodee explained the planning for that project including the placement of the seams and the handling of the large heavy expanse of material.  The application included heat bonding, working from the center to push any bubbles to the finished edge.

Jodee then used Clay Thompson’s cover for his Riva as a model to explain about creating a custom cover for your boat.  This cover was made with Sunbrella fabric. The only fabrics she would recommend would be Sunbrella, HarborTime Marine, or for lighter weight fabric, Aqualon Marine Fabric.  She noted that the cutting of the fabric was done with a heat cutter which seals the cut edge to keep it from raveling. Horizontal seams were sewn first to create the large cover, then draped over the boat for custom fitting.

Two other important points shared by Jodee are that UV coated polyester thread is the only thread that will stand the test of time, and starting with good quality foam for cushions is essential.

Wow – that was a lot to learn in a few hours.  As people left, there was more visiting about which new tips would be applied to their projects …  and when we’ll see each other next.