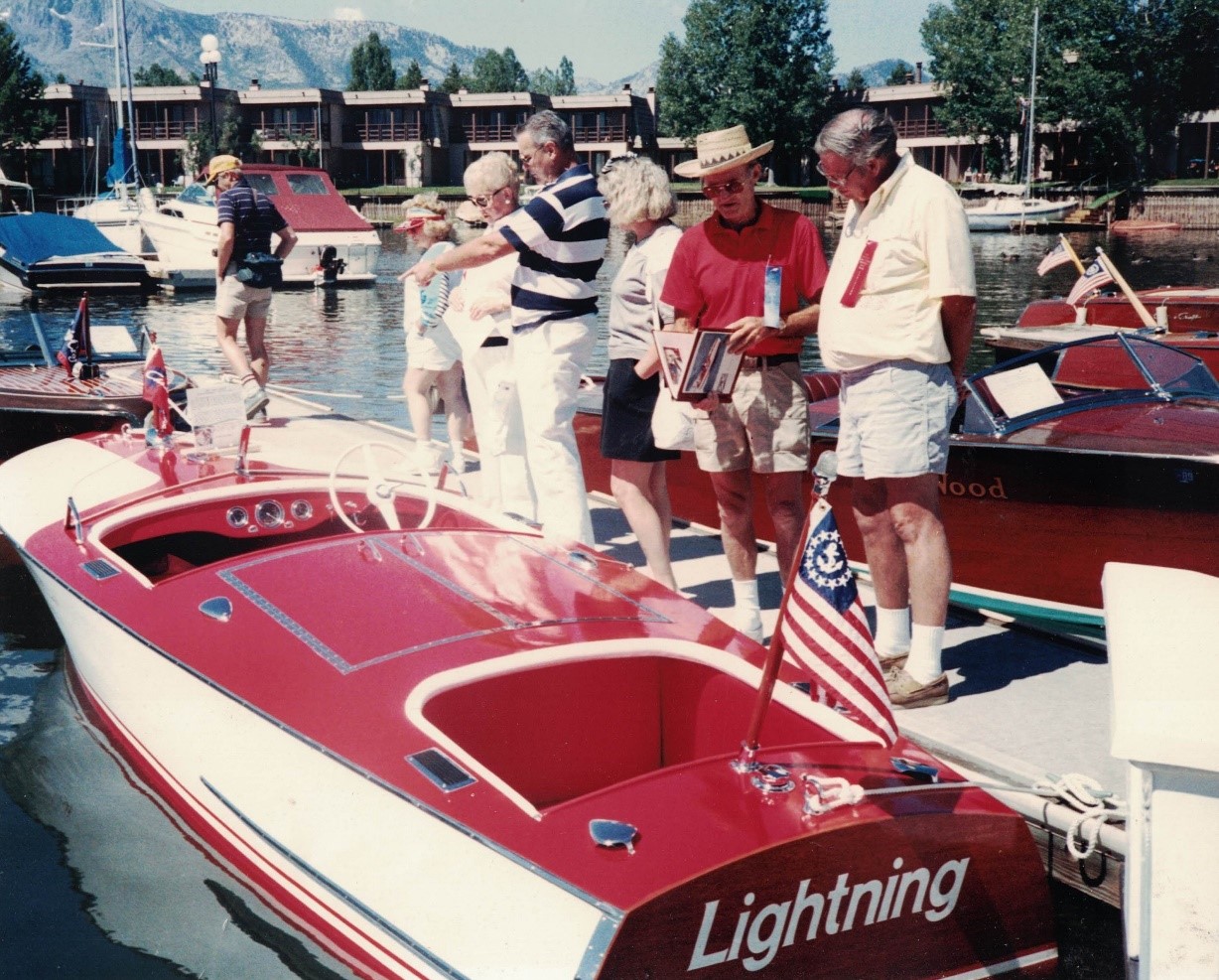 By Don Veihmeyer member of the Northern California/Lake Tahoe chapter

This Racing Runabout was the first boat of the model built after WWII. The factory originally installed a Hercules model KB engine for power, with a 3 downdraft carburetor model which required a metal deck cowling on the engine hatch cover. The Lake Tahoe Boat Company bought the boat and ordered a change in the Hercules engine set-up to a Hercules MB engine which had a higher horsepower rating of 140. This engine had a conventional single updraft carburetor much needed for the 6200 feet high altitude of Lake Tahoe. This meant there was no need for the metal cowling on the engine hatch cover. However, when the boat was delivered to the Tahoe Boat Company on June 13, 1947, the metal deck cowling remained in place.

Bill Pennington of Emerald Bay was the first owner of “Lightning” in 1947. In 1951, Sal and Wes Stetson purchased “Lightning”. The red and white runabout was a striking addition to the boats going in out of Emerald Bay. The Stetson’s also ran a seaplane sightseeing operation in Emerald Bay to show tourists the beauty of South Lake Tahoe. The Stetson’s owned a waterfront home with winter storage for the seaplane and “Lightning” on the southwest corner of Lake Tahoe.

In 1984, during a heavy December storm, the Stetson boathouse was destroyed and consequently “Lightning” was severely damaged on the rocky shore. The boat washed ashore right near their house. As shown in the picture, Sal Stetson is sitting in the damaged boat. As the picture indicates, there was severe damage on the starboard side of the boat.

In 1987, Don Veihmeyer, also a long-time resident of Lake Tahoe, learned that Sal and Wes Stetson, wanted to sell the damaged boat rather than have it restored. I knew that this popular Chris Craft Model would be a challenge but was worth restoring. Besides, being from Lake Tahoe, Don was excited to restore a Tahoe boat. Fortunately, I realized that I could use the port side of the boat to duplicate what was needed to fabricate the components of the starboard side. I also decided to eliminate the metal deck cowling as it was not needed for the original MB engine. This challenging restoration of “Lightning” was complete in July 1989.

After the restoration, my wife Anne and I, used the boat for several years for family outings not only on Lake Tahoe, but on Lakes Havasu, Powell, and Mead. Shortly after the restoration, we entered the boat at the Tahoe Keys show. Its Tahoe history was fun for many of the attendees. Cap and Barbara Peckham, close friends eventually bought the boat and continued to enjoy it on Lakes Arrowhead and Big Bear in Southern California. A few years later, Cap decided to sell “Lightning” to a party in the eastern area of the country. we have learned recently that the boat is now named “Uno”.