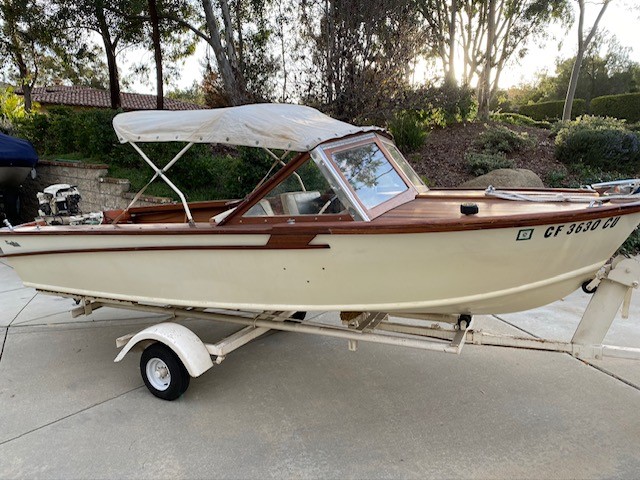 by Tim VanderVeen member of the Southern California chapter

A friend of my son’s inherited a 1958 Trojan Marlin, 15-foot long with a 1958 Johnson Sea Horse engine. The Marlin was last registered in 1971 and was in an airplane hanger in San Diego all this time. The family initially thought they would keep the boat, replaced the tires and dropped it off at a local marine service company to see if the mechanics could get it running. Overall the boat was in pretty good shape for its age, but the almost 50 years of storage had taken its toll on the fuel pump, carburetor, bees wax insulated coils, impeller housing, etc. After an estimate for just the engine, the decision was made to unload it.

I did ask the grandson if he could ask around in the family for any memories of the boat. Surprisingly, his grandmother told him she does not recall ever having been in the boat. Maybe there was a secret that was buried with Grandpa.

So I became the proud owner of Lil’ Cutie. The name selection was easy,just about everyone who saw the Marlin first comment included the word “cute“. Our lake house is in Big Bear Lake, California, and one of the local mechanics took on the engine project. He had worked on many of these old Johnson’s but it had been years since he touched one. We ended up having the carburetor and fuel pump rebuilt, replaced the coils, plugs (looked like original) dropped the lower unit and removed 50 year old grease or congealed lower unit lube. The trailer was sandblasted and powder coated, the deck varnish was stripped, seams cleaned out, and 15 coats an a tube of white boat life and the mahogany looked new.

With the low and high speed jets having external adjustments, Cutie was tuned for the 6700 foot elevation and runs like it must have in 1958.

I have no idea how many of these little 15 footers still exist, but it seems like they are pretty rare. In fact, so far I have only found mention of one similar and it was sold in the Cleveland area in 2011. Would welcome any history.