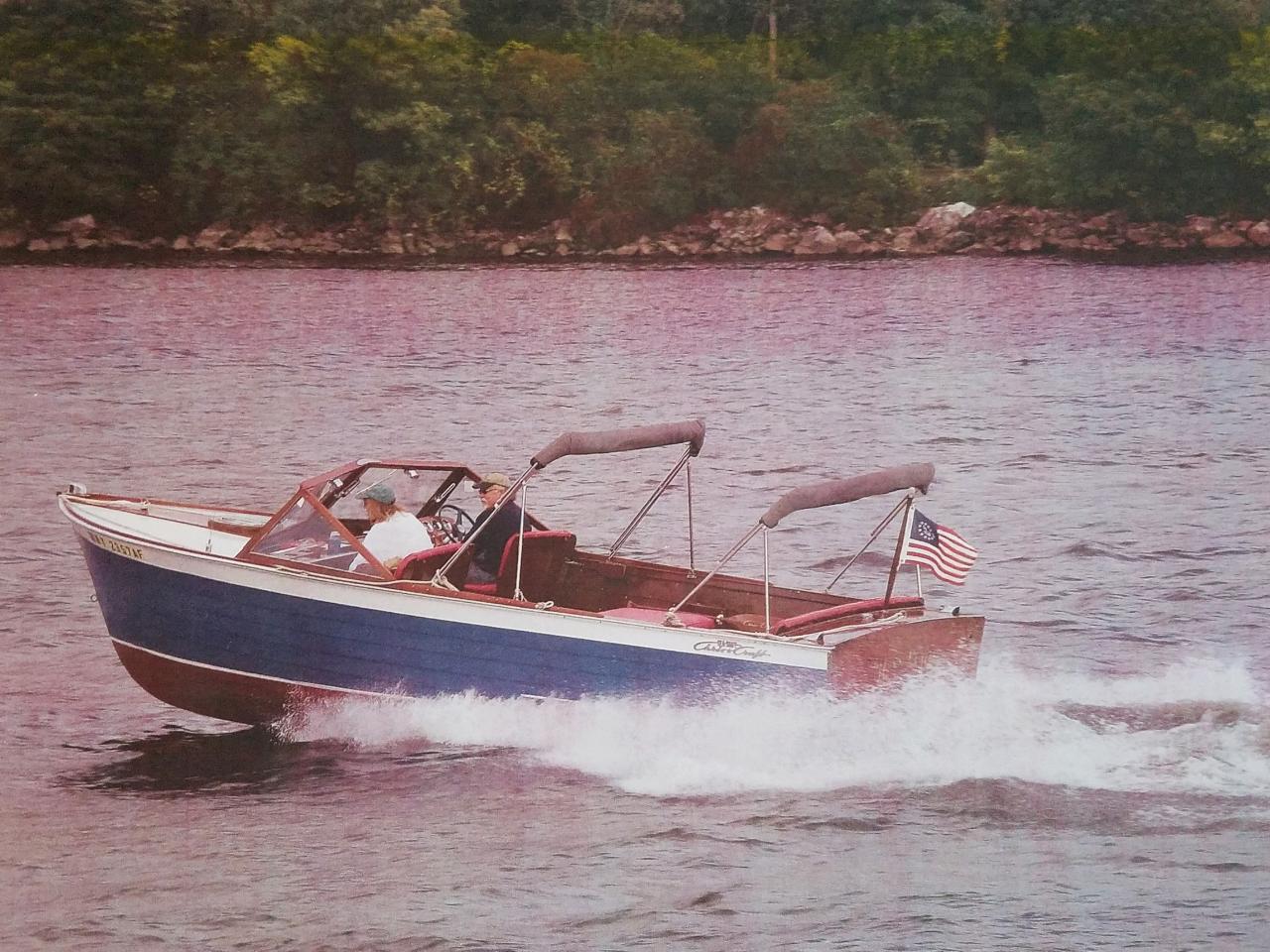 By Steve and Vickie Young members of the Hudson River chapter

We own a 23’, 1960 Chris-Craft SeaSkiff, “Miss Louise.” As members of the Hudson River Chapter, we are harbored near Kingston, New York; but you can find us as far south as New York City (5-hours in our boat) and as far north as Lake George. The Native Americans had a name for the Hudson that means “the river that flows two ways.” Although the Hudson continually drains to the ocean from the Adirondack Mountains, it also has a 4-mph current that reverses with the tide. In Kingston, nearly 100 miles from the ocean, the tide is still 3 to 4-feet. Consider the amount of water required to raise 100 miles of river 4-feet in six hours. At it’s worse, the Hudson can certainly get ugly. Don’t mess with Mother Nature!

We looked for a boat that would be trailer-able, yet big enough for us to feel safe on the Hudson – but not necessarily a wooden boat. When we spotted the Sea Skiff sitting by the side of the road, the flair of her full, upswept bow made me stop the car. When I saw the mahogany transom and dual exhausts, I knew I was in different territory. When I peeked under the cover, expecting leaves and raccoon droppings – I was thrilled. Although she needed work, she was clean, this was never a “grey boat.” We refer to her as a “biggest little boat” or “littlest big boat.” We have owned her 24 years and have not been disappointed!

As far as we know, this has always been a New York boat. According to the hull card, she was shipped to the Brewerton Boat Yard on Lake Oneida in March of 1960. It is not a “Ranger” model but was ordered with the optional bow porthole, the interior covering boards, and one electric windshield wiper, but with the manual shift. We know she had spent some time on Lake George, according to the sticker on the windshield when we bought her.

Several years ago, we had the pleasure of meeting Chris Smith, when he traveled as part of a group to the ACBS International Show in Lake George. We were delighted to see he was traveling in his well-known, 27’ Sea Skiff the Odyysea. He had customized it, the grandson of the founder! We are not strict traditionalists either!

Miss Louise was repainted by Boyd Meffert’s team, who also installed rebuilt gauges by Pat Powell and an arched support under the back seat. When she lost compression, her original 283 was rebuilt as a 350 by Drake Engines. We have a two-part, full canvas top that is great for the sun, and with the sides and isinglass curtains in place, makes for a great tent on an overnight stay. We plan on participating in a flotilla leaving from the Hudson River Maritime Museum and traveling the Hudson to the International show in Burlington, VT in 2022. A cooler, a port-a-potty, and a 23’ Sea Skiff, hey, we’re good! Join us!