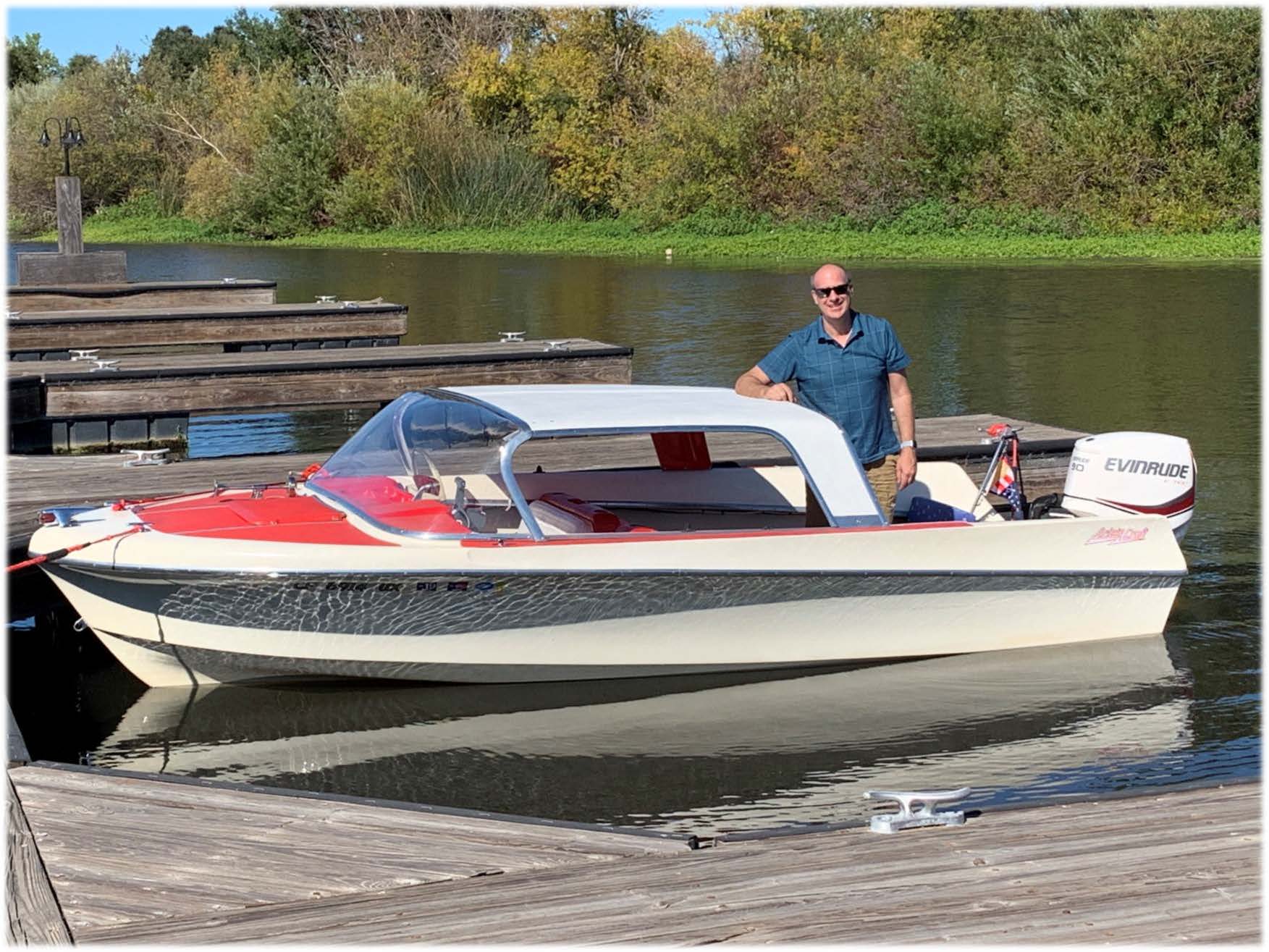 by  David Martin member of the Northern California/Lake Tahoe chapter

As a child of the 70’s, some of my happiest summer vacations were spent at Clearlake and Lake Berryessa in California with our 1959 Wizard Marlin Imperial when I learned to water ski at 6 years of age. I always loved going boating, but our little boat with its 50hp Johnson struggled to get my older brothers up on single Maharaja skis as they got older and bigger. Unfortunately, our boating summers ended when I was around 12.

Fast forward to July 4th, 2010, and I received the horrible call that my 52 year-old brother collapsed at a party and passed away. It rattled me to the core and began a shift in my thinking about living for today and doing things that I enjoy. I had always wanted a boat, but found so many reasons not to get one. I started discussing getting a boat with my wife, since she had never been around them. To say she wasn’t as excited as I was, is an understatement. But with her support, I began my search in the summer of 2014. Initially, I was trying to find a Wizard like I had grown up with, but really didn’t know what I was looking for or at. By that time, I had joined forums on Facebook, Fiberglassics and participated in an event with the Golden State Glassics (GSG) where I met like-minded people who enjoy their classic fiberglass boats. I rode in a 1959 Dorsett El Dorado, “Mango Madness” at my first event with Paul Furtsch. Eduardo Nanca, the unofficial leader of GSG, was so inviting and always planned these awesome runs, I couldn’t resist and was immediately hooked!

In 2015, on Fiberglassics, a gentleman by the name of James Lowe, now a friend, had posted about an identical boat to his, located in Meridian, Idaho. A 1963
Aristocraft Funliner named “Miss Renee” after the original owner’s daughter that sat on a 1962 original Holsclaw trailer! What appealed to me about this boat was that it had no wood for stringers, it looked pristine and the restoration would be
minimal. However, I was in the San Francisco Bay Area. I began to converse with the second owner of the boat and went back and forth all summer. Finally, I pulled the trigger in September and coordinated a flatbed delivery to my home.

When the boat arrived, it showed some signs of age, but overall was in excellent condition for something older than I was. It appeared to have always been garaged and was powered by a 1966 100hp Johnson Golden Meteor. I immediately began working on the motor. Not being mechanical or knowing anything about two stroke motors, it was slow going. However, with the help of technology and James, I would Facetime with him as I pointed my iPad at the motor. He would help me troubleshoot issues and identify what I was looking for. Once the motor was running, I worked on other projects, like the reupholstering of the seats. The windshield had a small crack, and The Plastics Guys outside of Sacramento made a new one. There was a reason that windshield had the nickname “Bubble of Trouble”. I also had some holes patched on the transom and had both the transom and the splashwell painted and
repaired by A&C Marine.

Photo above is the boat being flatbedded from Meridian, ID to San Mateo, CA

Enjoying the boat for a couple of years, I had a love-hate relationship with the motor. It became too unreliable for my limited skill set and ruined a few vacations. I decided to upgrade to a new Evinrude Etec 90hp which pushes the boat to 42mph and is amazingly quiet and fuel efficient!

In 2019, I decided to rename the boat “A Glass Act”, since my wife and I both involved in theatre in our spare time. I entered the boat in the ACBS Bass Lake show where we were virtually rained out, but we had a great time meeting new people. As I was preparing for that show, I came across an original hardtop on another boat in Fresno. My friend and fellow club member from Golden State Glassics and ACBS, Jack Armistead, immediately went to look at the boat the next day. We were able to negotiate just purchasing the top. Jack graciously took it home and kept it until I could pick it up. He asked if he could start working on it. Of course I said, “yes” and by August, it was completely redone, and he delivered it to my house!

“A Glass Act” will be all decked out in its original glory for the 2020 season! I’m so thankful to the people I have met in this hobby over the past few years and for the special time my wife and I have had with the boat. I’m hopeful that on July 4th this year, the 10th anniversary of my brother’s passing and a few days shy of my 52nd birthday, that I will be on the water in “A Glass Act”
remembering him and keeping our family boating tradition alive.