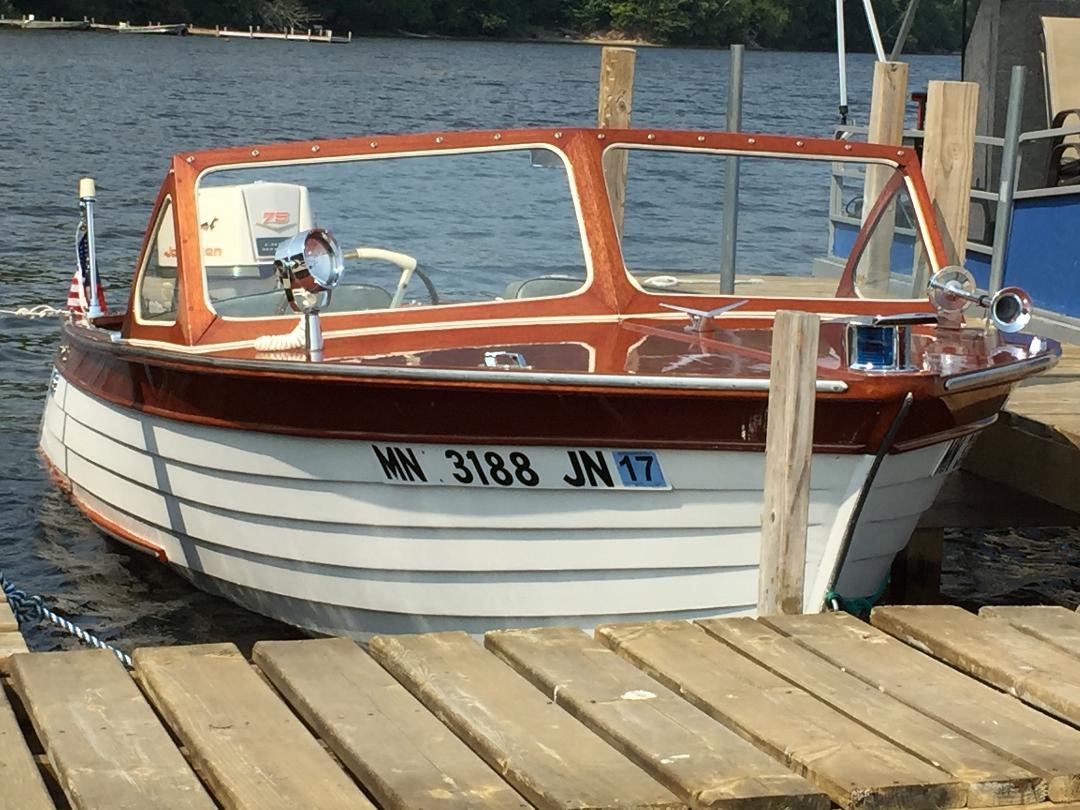 It was a few encounters with a Thompson boat around 1965 that launched my interest in wooden runabouts. Whether as a passenger watching the water rush by during a tight turn, as a spotter monitoring the status of a skier, or as a person on the end of that ski rope, the images were recorded into memory.

The Thompson involved was around 16 feet long with a 75 Hp Johnson. There was something striking about the beautiful reddish-brown mahogany windshield and stained shear strake on top of the white lapstrake hull that set this boat apart. Seeing the wooden ribs and hull reminded a person that it was almost a living structure. It seemed more crafted than just molded with man-made composites. While it might have required some sanding and varnishing periodically, the result indicated a commitment on the part of the owner.

Around 2003 my ever-watchful son found a boat on a trader website. A 1960 Thompson, about 16 feet long, 75Hp 1961 Johnson Super Sea Horse. It was a Sea-Coaster Runabout model #473 built in Peshtigo, Wisconsin by a builder with a code name W, and was the 2559th hull made in 1960. This would be great. Get the boat, renew the varnish, repaint the hull and have it ready for the lake in August.

Well. Organic boats have organic things happen over the years, and while this one was pretty well preserved, it did need a lot more work than initially presumed. After making a map of all the components, the motor, seats, hardware and all the controls were removed. Four 12’ pieces of quarter sawn white oak were used to strengthen the bottom from the inside. One 1½ x1½” piece was through bolted to each side of the keelson, and one 1½ x 3” to the floor on each side between the keelson and stringer.

The entire inside below the floorboards was treated thoroughly with a cellulose based penetrating epoxy and then varnished. The hull outside from the bow eye to the spray rails was coated with penetrating epoxy and four coats of a high build epoxy barrier coat. Then three coats of semigloss traditional white hull paint finished the outside.
It took experimentation with four different filler stains to determine the color that looked right for the brightwork. Then 6-9 coats of varnish were needed to get a nice level of gloss and smoothness. It is surprising how much one can learn by researching and experimenting on a project like this.

The motor had a cracked shroud which was repaired and painted. Then a new thermostat, water pump, a few fuel lines, and plugs and points were installed.

After approximately 700 hours of effort, the first launch occurred in 2005. Since that time, we have been able to experience a lot of the fun of boat ownership. We have cruised several lakes in Minnesota, pulled various family members on a tube, and received many comments at launching ramps. We attended the fifth Thompson Antique & Classic Boat Rally in 2006 in Marinette, Wi., and gave the boat an impromptu torture test across the waves of Green Bay.

We also had the fun of losing a Bearing Buddy on the trailer 15 minutes into one vacation, had the 45-year-old trailer coupler jump off the hitch ball on another trip, and had a tire shred apart on the way home from another vacation. We learned what a worn clutch dog felt like and then lost a prop and prop cone when backing away from a dock due to a poorly installed cotter pin (found the prop).

But it was particularly satisfying to launch the reborn Thompson Sea-Coaster Runabout in the same lake in Michigan as that first boat in 1965. Another Thompson wood boat about 16’ long with a white 75 Hp Johnson was pulling a teenager around on a kneeboard, or just taking smooth sweeps around the perimeter of that lake. There was some new wood in the boat, and new lighting technology on the trailer, but it seemed like old times. Even when it is not in a lake but in a garage, it is just pleasant to lift the boat cover and smell the familiar smell of varnish and remember the charm of an almost living watercraft.