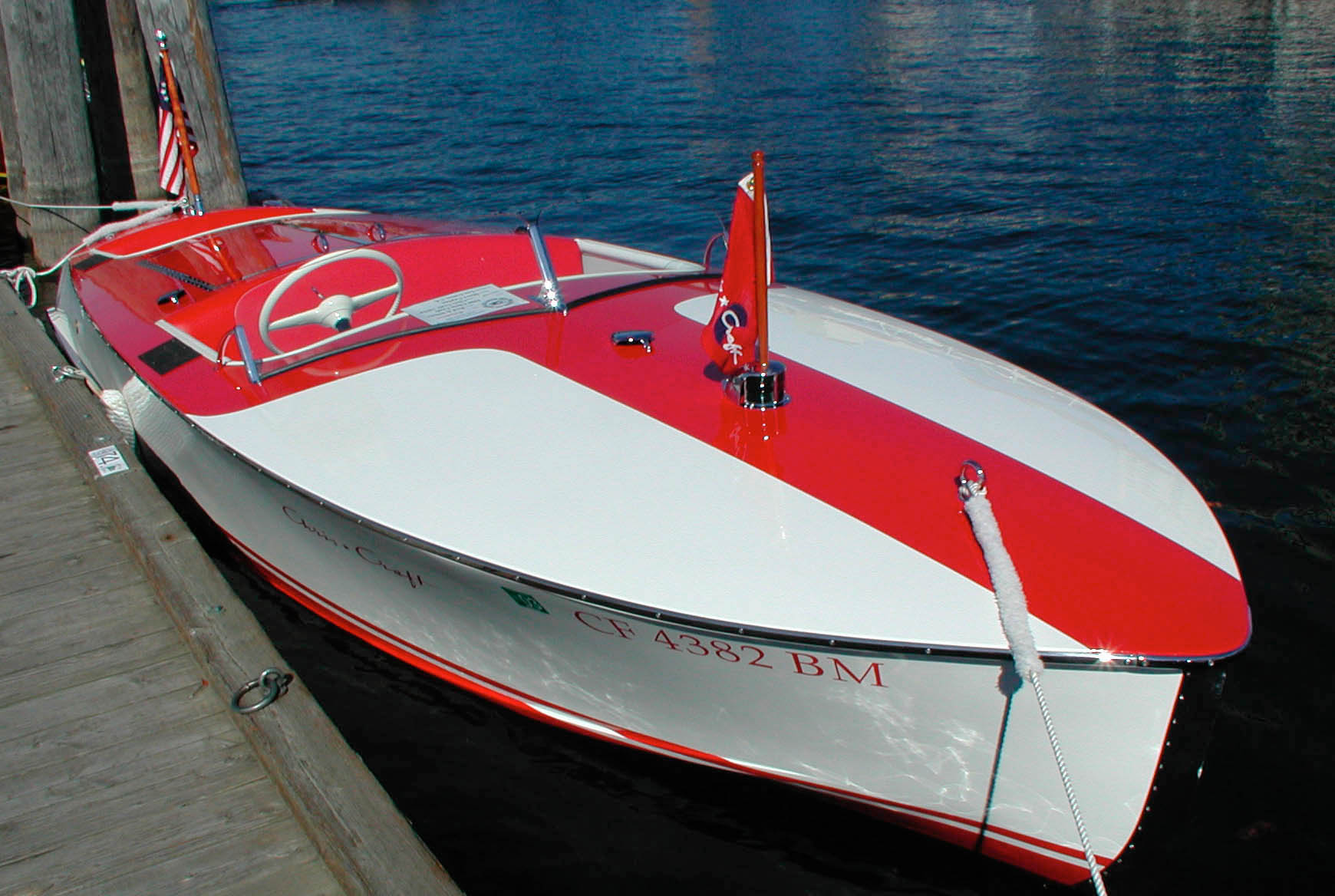 Her name was chosen at a family gathering. Cheryl’s mother saw a picture of what she was going to look like when she was finished and immediately said, “I’d name her Lollipop because she looks like an old fashioned red and white lollipop!” And so, she was named!

The 1948, 19′ Chris Craft Red & White Racing Runabout with a Chris-Craft-MB 145hp, 6 cylinder engine. Built in Algonac, Michigan late in 1947, our 1948 model, (hull number R-19-064) had been owned by two other families when we purchased her. She was used first in northern California’s Sacramento Delta and later on at Donner Lake, near Lake Tahoe. On Donner Lake, she was used as a guest ride boat for the family’s small lakeside motel. Chris-Craft built these painted boats after WWII when there was a shortage of mahogany. The boats were constructed with cedar planks and a plywood deck that was covered with canvas and then painted. The only mahogany is on the transom.

We completely restored Lollipop in 2001 with the late Paul Mehus overseeing every detail of her restoration. When we bought her, she had all her original parts and the original engine in place. Steve and one of our sons disassembled her while meticulously photographing and documenting everything. Parts that needed to be re-chromed were sent off and research began on the dash to confirm the configuration and instruments were original. From this point forward, we “facilitated” her restoration. The work was done in our barn, so we had the opportunity to see her on a day to day basis. Her hull was in good shape, so it was taken down to the original wood and repainted. We had new canvas stretched over her deck across the bay in Oakland. Trailing her there and back without her windshield and hardware, she was quite a site. The toll taker at the bridge crossing asked why my boat was upside down on the trailer! At a glance, she did, indeed, look upside down! Her restoration was rather straight forward, the only difficulty being the painting of the red design on her deck. We borrowed a template from an ACBS friend who had recently restored a red and white. She looked perfect!

Lollipop won her first 1st Place trophy in her class at Concours d’Elegance at Lake Tahoe in August 2001. Between 2001 and 2007 she won First Place each year at the Concours except 2004 when she sat out the competition. Also at the Concours she was awarded Best Chris-Craft of Show Perpetual Award in 2003 and in 2007 Best of Show under 23’ Perpetual Award. Under exhaustive scrutiny, Lollipop walked away with the Best of Show under 22’ award at the ACBS International Annual Boat Show in Lake Coeur d’Alene in 2001. She is always a favorite with children at any show and in 2012 won the Kids Choice trophy at the South Tahoe Wooden Boat Classic. Lollipop has been shown but not judged since 2007 as it is the Caplan family’s fun racer used on the smooth morning waters off Tahoe Keys in South Lake Tahoe where she skims the surface with ease.