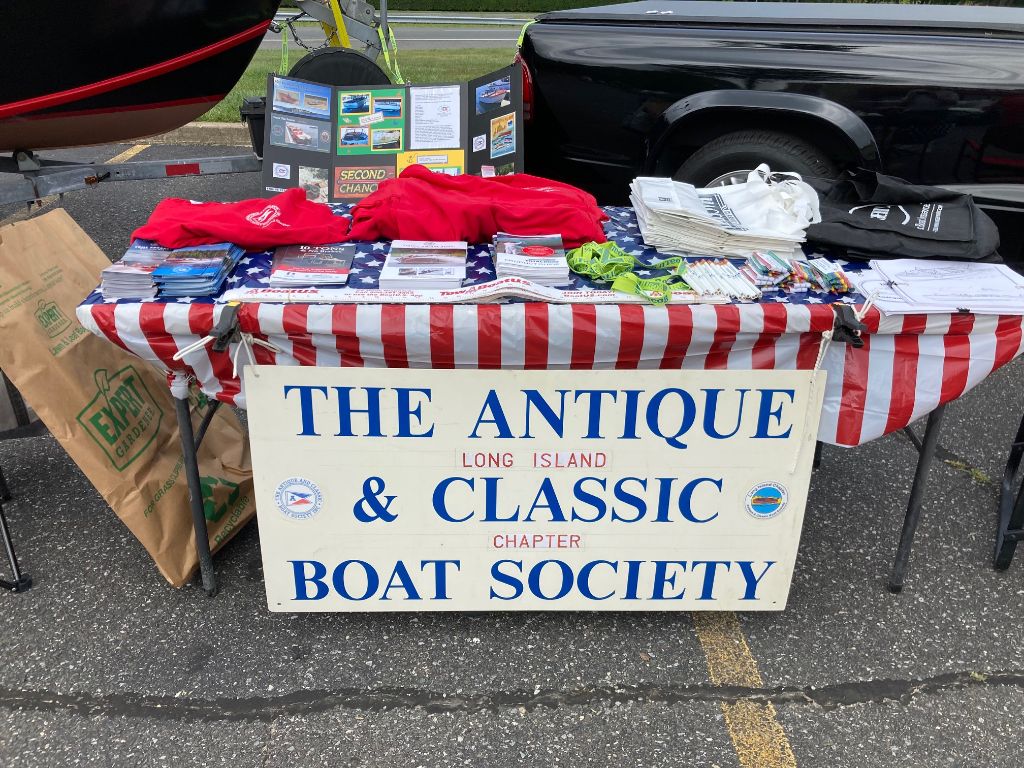 On a lovely Sunday morning, Member (and former Vice President of the LI Chapter) Rob Almond pulled out of his driveway with the ACBS Long Island Chapter ambassador boat, Second Chance (Classic 1966, 16’ Eltro Outboard, owned by Member Chris Almond) in tow. Rob was heading to meet up with Jennifer Chernow (Chapter Boat Show Chairman) at the Five Guys Burger parking lot in Hauppauge, NY, where the Back In Time Car Cruisers Club was having a car show.

Member Bob Warnke had extended an invitation to the Chapter from Car Club President Joe Emmart to bring some trailered boats and be part of the show. Since the pandemic, we have not been able to get our boats out for the public to see, so we thought this would be a nice opportunity. 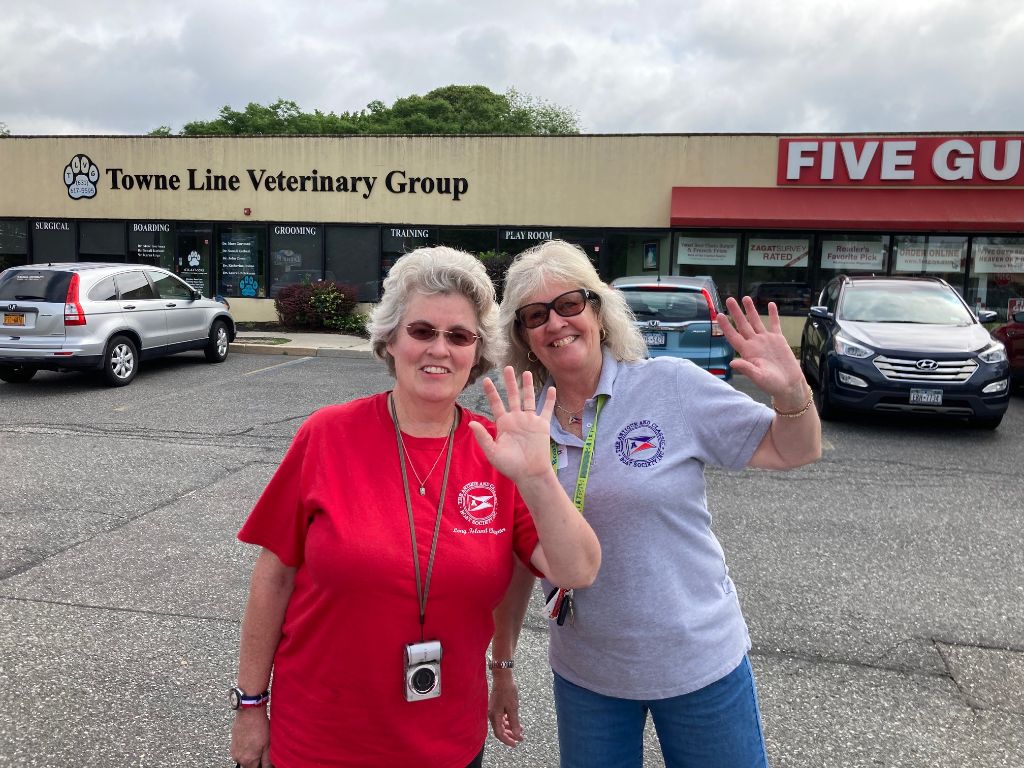 In addition to Second Chance, Jennifer brought an antique outboard and a display of vintage water skis and she, Bob and Rob set up a nice little display, which garnered some attention from car enthusiasts and visitors. Vice President Jan Lowry, President Bob Williams, and member Judy Campbell all stopped by for a little while. 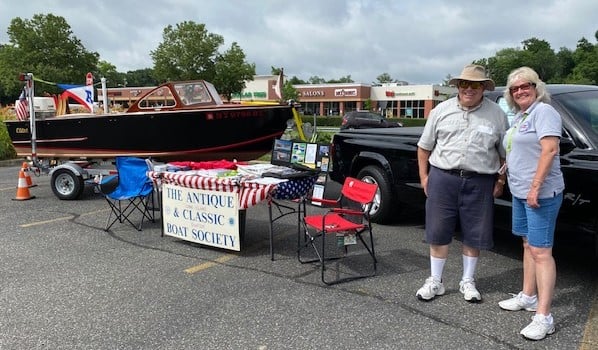 We thank the Back in Time Car Cruisers Club for inviting us! 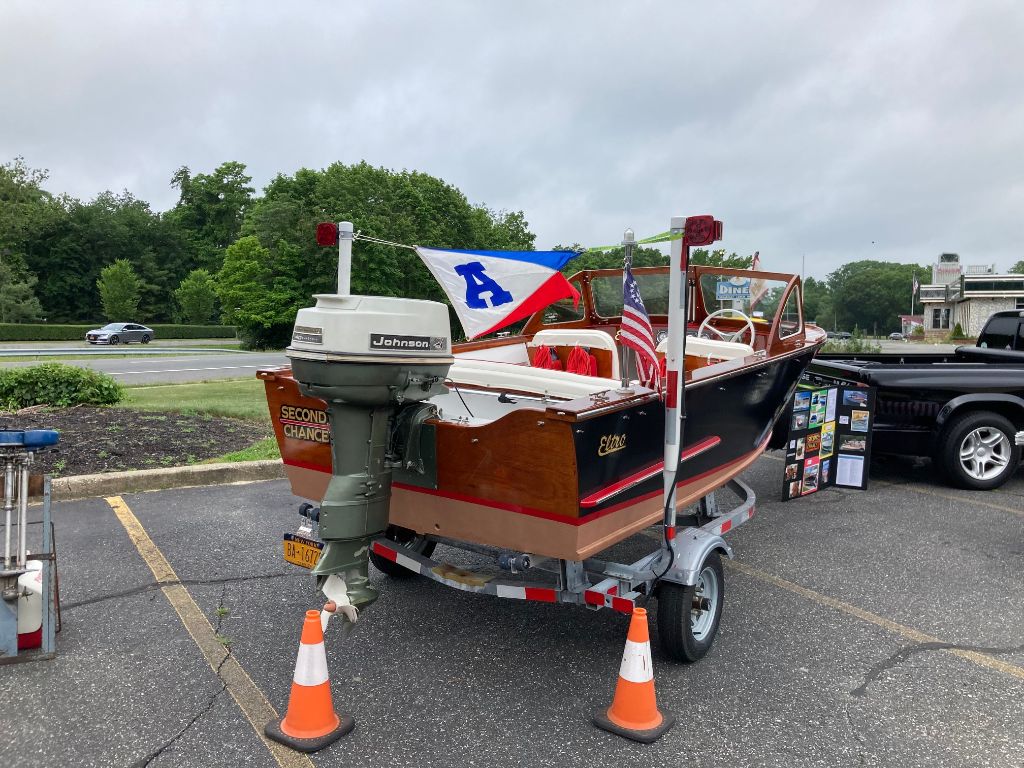 Back story: We refer to Second Chance as the ambassador of the LI Chapter because she was a project boat restored by many Chapter Members beginning in April of 2008 and ending with her maiden voyage in August of 2013. She then sat under a tarp for nearly 5 years in Babylon Village (not too far from our home) before Chris acquired her in June of 2018. Chris cleaned her up, and used her for 2018, then during the winter of 2018-2019, he re-varnished and repainted her restored white hull color and she won Gold in her division at her first International Boat Show in Alexandria Bay in September of 2019. During winter of 2019-2020, he gave her a new black hull color (inspired by a boat at the Antique Boat Museum in Clayton, NY) and rebuilt her 2 cylinder, 40 hp Johnson Outboard, Second Chance won 2nd place in her division at this year’s Lake Hopatcong Chapter Boat Show, where the new paint scheme was met with favorable opinion by those in attendance.