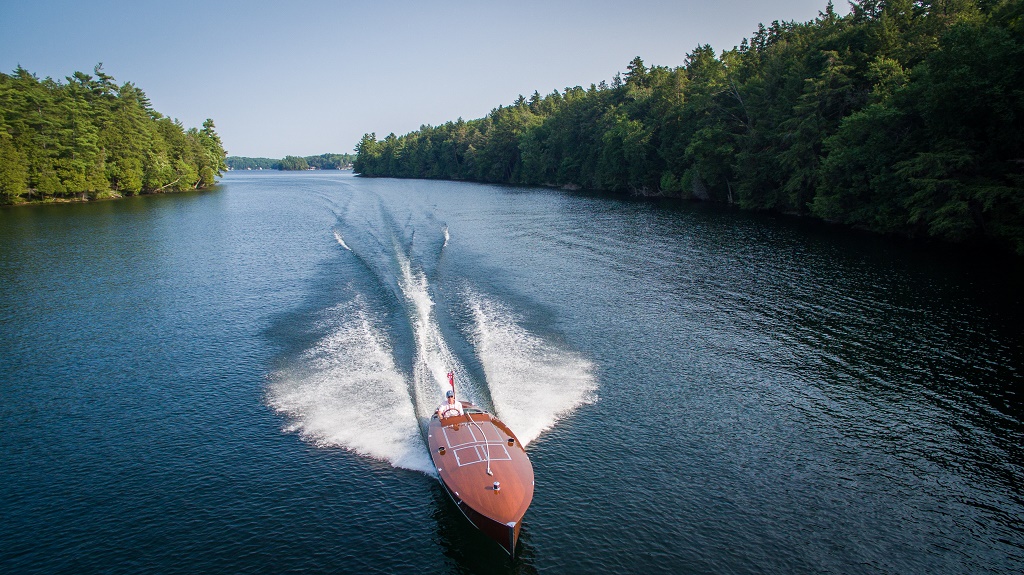 By John Trainer member of the Toronto chapter

I have had a lifelong interest in classic boats. This reflects the fact that my summers have been spent on the Muskoka Lakes where some of the finest wooden boats in North America were built, and still ply the waters today. I grew up around two launches that were built for my great grandfather. They both are in the family today; a 1911 32 ft. Minett, and a1926 35ft Minett-Shields. I had regular occasion to see other boats of all shapes, sizes, and years built by Ditchburn, Greavette, and others. How could one not enjoy these classics?

As I became a young adult, my focus turned toward the gentleman’s racers of the 1930’s built by Minett-Shields and Greavette. For years I yearned to own one, but because there were so few built and available for sale the likelihood of purchasing one was remote; not to mention the price.I was not deterred.

With the restoration shops starting to build replicas of the finest originals that created new opportunities, in particular Butson Boat Builders designed and built a 19ft racer after the 1930’s boats. My cousin, who also was developing an interest in old boats, and I explored the idea of having Tim Butson build one for us. Unfortunately, the price point was too high for our budget.

Time passed, and one day I saw in the classifieds of Classic Boating magazine a replica of a 20ft Hacker designed 1925 Junior Gold Cup Racer The photo was intriguing, and thus I contacted the seller. He subsequently sent me more information and photos. Based on that information and the price I was motivated to drive to southern New Jersey from Connecticut to see and test drive the boat.

Although the boat had great lines and drove well, it was bare bones. The interior was not complete, and due to storage issues, there were cracks in the covering boards. The basic hull had been built by Fish Bros. I still liked the design, and contacted Pete Fish to see if he could rectify the problems. After our conversation, my cousin and I submitted an appropriate bid. It was not accepted.

Putting our heads together my cousin and I decided that we should move forward to own a gentleman’s racer customizing it to our liking. Knowing that we liked the Hacker design and the 20ft length, it made sense to go back to Pete Fish to determine if he could build a new boat that looked old consistent with Muskoka boats; incorporating stain color, hardware, and the general feel. To that end we visited him at his shop. After much discussion, we agreed that Pete and his brother would build the boat. Unfortunately, there was a period of time in his queue. Ultimately, the boat was started in the fall of 2004. and finished in May of 2005.
When we went to Lake George for the sea trials, the boat far exceeded our expectations. It was fast, very smooth riding, and most importantly a head turner. The boat has had its foibles, but what wooden boat doesn’t!

Our dream has been realized despite what an impractical and crazy idea is was; therefore, the boat’s name is prefect “LOONACY”