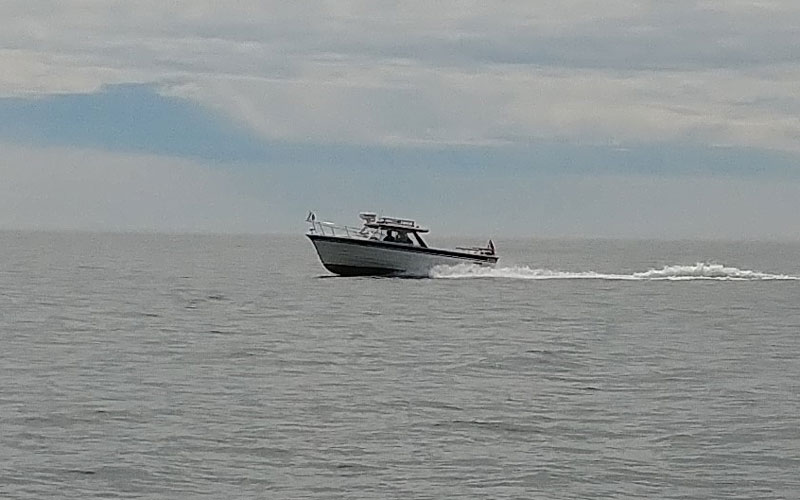 2,300 miles, 11 states, 1 province and two countries passed under our wooden keels in the summer of 2017 on our Great Loop journey.

The three segments this summer left us only 455 miles short of completing the entire roughly 6,000 mile long Great Circle Route, also known as The Great Loop, which allows one to circumnavigate the eastern United States and through Ontario Province in Canada.

Heartland Classics member Dick Baner and his Eureka, Illinois neighbor Gary Weiss, in three different boats, and Carolynn and I, John Thompson, in two different boats, have been knocking out segments of The Great Loop in our wood boats since 2007 when we completed the Tennessee River portion of the loop with the Dixieland ACBS Chapter as it was a part of the club’s river cruise of the Tennessee and Cumberland Rivers. 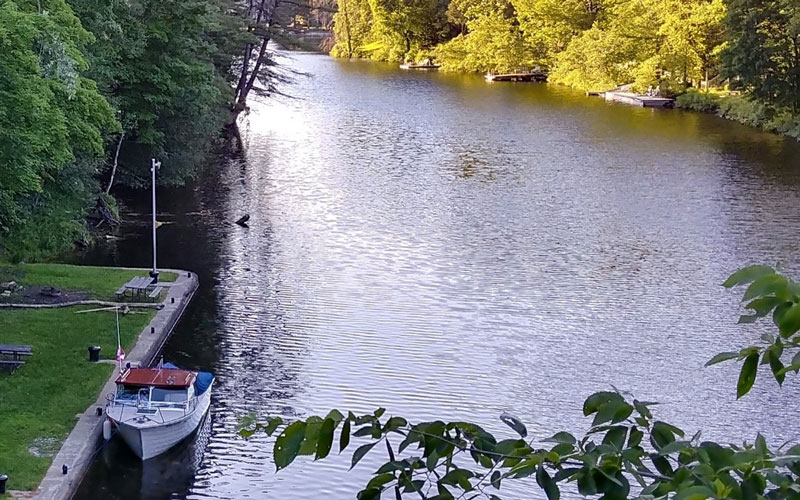 It would not be until the spring of 2013 that we started in earnest doing segments of The Loop. The four of us decided this year that we were not getting any younger, so chose to try three segments this year. Three windows of time were found between our schedules and were reserved this summer of 2017 to knock out as much as possible of the remaining miles of the loop.

We began segment one of 2017 in the middle of June from just south of Chicago and went up the west coast of Lake Michigan to allow the prevailing winds to have the least time to build waves before meeting the hulls of our 24 foot, 1983 and 1984, Skiff Craft boats.  We crossed approximately 113 miles of Lake Michigan from Sturgeon Bay, Wisconsin to Charlevoix, Michigan in white capping and high following seas.  (The wind forecast was for about half of what we actually experienced offshore). 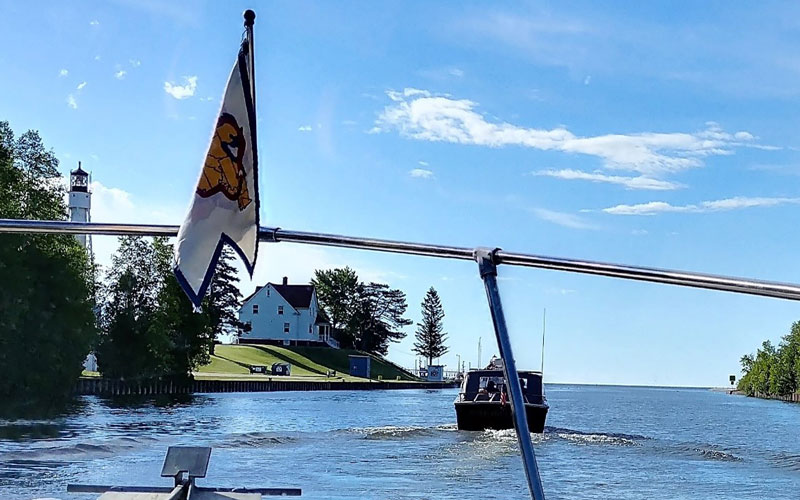 From Charlevoix we cruised north to pass under the bridge at the straits of Mackinaw where Lakes Michigan and Huron join and seem to have a tug of war under your keel to determine which is in charge.  Then it was north past Mackinac Island and into Canadian waters. 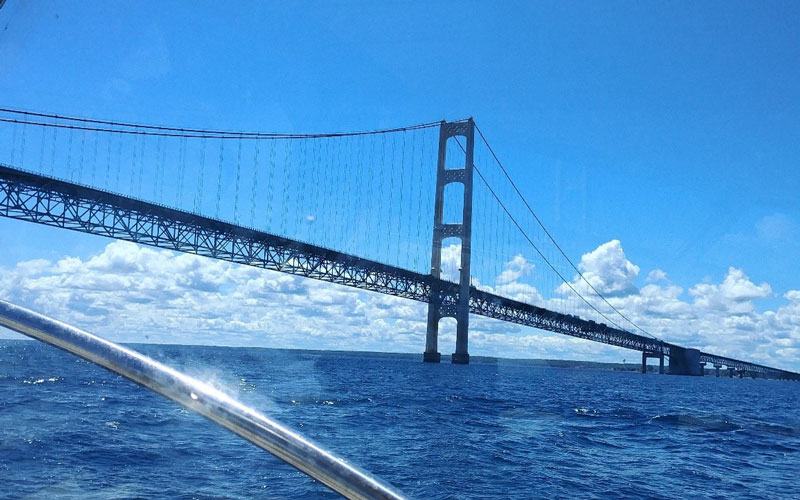 We reported in with Canadian customs at Thessalon, Ontario on the western end of the North Channel.  We took the inside route of the North Channel to reach Killarney and were rewarded with spectacular scenery of rugged rock islands covered with pines and broadleaf trees, some with cabins nestled into the rocks, with mountains often visible in the distance.

The Skiff Crafts at the Sportsman’s Inn at Killarney, ON between the North Channel and Georgian Bay

We left postcard perfect Killarney and motored warily (possible thanks to the radar on the Baner boat which could identify if other boats were in our path) into a fog shrouded, but smooth, Georgian Bay to reach the western end of the Trent-Severn Waterway.  44 locks later—including the Big Chute railway lock and two hydraulic pan lifts— and after miles of stunning scenery, quaint villages and waterfront cabins from modest to massive, we would cross Lake Ontario and reenter the United States and clear customs in Oswego, New York. From there we made our way through the 24 miles and seven locks of the Oswego Canal before turning east on the Erie Canal heading to Brewerton, New York. 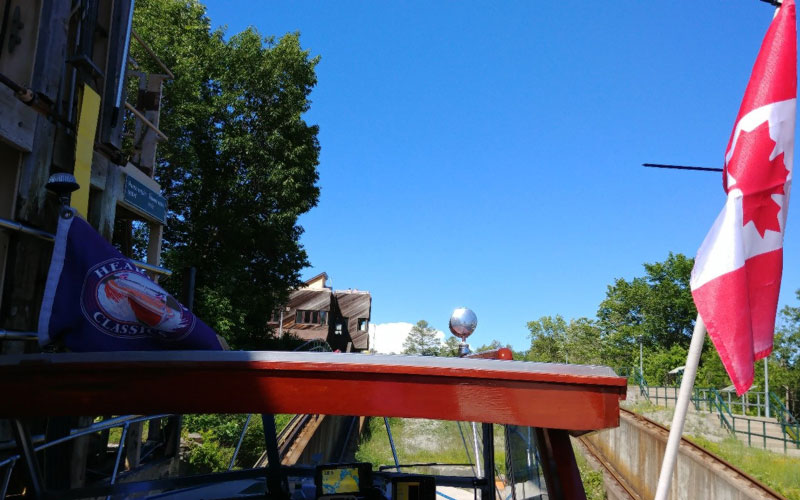 Big Chute Railway “lock” on the Trent-Severn Waterway in Canada that conveys you to the higher/lower water. Note Canadian Courtesy Flag flying and Heartland Classics burgee from light staff.

Brewerton is at the western end of Lake Oneida and is where we would end our first leg of The Loop for 2017.  We left our boats in dry stack storage and rented a car back to Chicago to get our trucks and trailers.  From Chicago we had covered 1089 water miles in two weeks, had two broken wrist bones treated at a Canadian Medical Center (amazingly the fall was not on the boat), and replaced a faulty distributor on one of the boats. 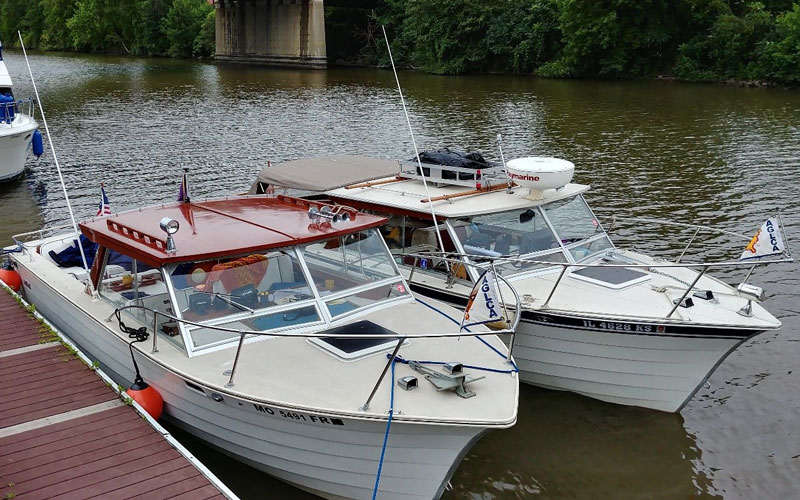 Lunch stop on the Erie Canal in New York

Leg two for 2017 began the last week of July from Brewerton, cruising east on the historic Erie Canal. Nursing her broken bones back to health, Carolynn would sit this leg out, but we would be joined by Dick’s son Craig, and Greg Hamilton, a friend of Gary’s, who had always wanted to travel the Erie Canal.  Just over 150 miles and 21 locks later we would enter the Hudson River and turn south. 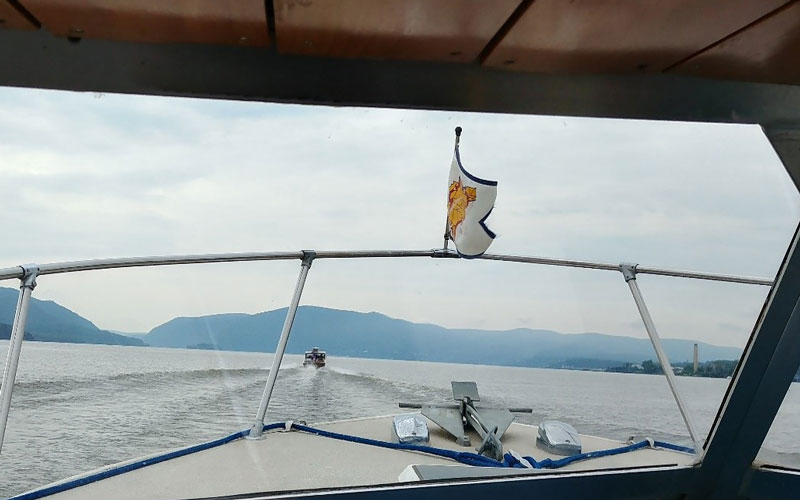 One more lock and we are unchecked to the sea on over 100 miles of picturesque river that slices through mountain ranges and by West Point Military Academy before emptying into New York Harbor which is bracketed by towering buildings and punctuated by the Statue of Liberty — and buzzed by countless vessels from sea going ships to water taxis and sightseeing boats to jet skis going in every possible direction.  It is one busy patch of water. 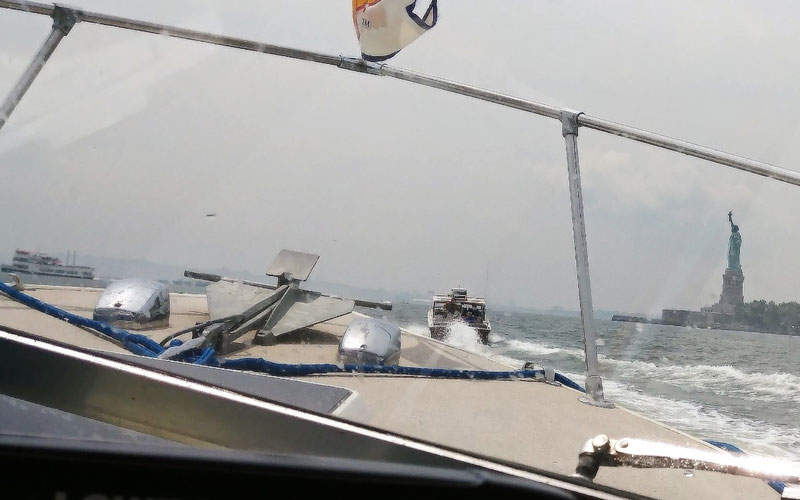 Passing the Statue of Liberty in New York Harbor. Note Ferry to port.

We exit New York Harbor for 26 miles in the open waters of the North Atlantic, heading south along the New Jersey shore to the inlet for the New Jersey Intracoastal Waterway (NJICW) where we can duck into protected waters again.  Protected yes, but tranquil they are not when the wind whips up the shallow bays along the NJICW.  We bounce our way through the bays and past inlets and glide smoothly in the narrower sections to its end at Cape May, New Jersey.  This leg had 22 locks to transit and covered 449 miles over 7 days.  We then headed home and immediately turned around with trailers in tow and headed back to New Jersey to bring our boats home to await Leg 3 for 2017.

The third and final leg was scheduled to begin in Carrabelle, Florida on August 30th so we could do the jump from there 160 miles across the Gulf to Tarpon Springs and then down to Sarasota Bay where we took out in 2015.  However, while driving our boats to Carrabelle the hurricane that hit the Texas coast took an unexpected turn just briefly toward Louisiana.  That was enough to kick up big waves in the eastern Gulf—too large for our comfort.  Always flexible, we trailered the boats to Jacksonville and headed up the Atlantic Intracoastal Waterway with stops at Jekyll Island, Hilton Head, Charleston, North Myrtle Beach, Beaufort, North Carolina, Coinjock and Portsmouth, Virginia and the southern shore of Chesapeake Bay.  We made it about a third of the way through the Chesapeake Bay before we had to end the third leg which had covered 761 miles and one lock (on the Virginia cut). 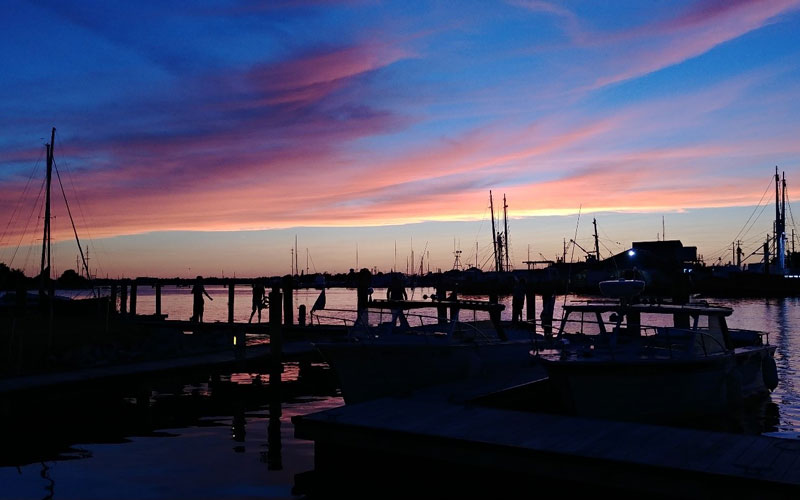 The sun sets on our boats in front our hotel, the Beaufort Inn, in North Carolina

That leaves us 240 miles from Carrabelle to Sarasota and 215 miles from where we stopped in the Chesapeake Bay to Cape May, New Jersey to “cross our wake” and complete The Loop.

“Doing” The Great Loop is about the journey more than it is completion of a trip.

For us, it is the additional accomplishment of navigating its waters in classic and late classic wood boats, smaller in size by far than most that tackle the Loop, and proving they—and we in them— can handle even the biggest inland lakes, rivers, bays and even the Atlantic Ocean in the right conditions—sometimes not even in the best of conditions.   Limiting one’s boating to The Loop alone would be missing many greats trips on other rivers and lakes we have enjoyed along the way, but The Loop takes you by some sights you likely would never see from land   As we have proven, the trip can be done in classic boats, from marina to marina without the need to ever stay on the boat at night unless that is your choice, and in time lengths to match any person’s available windows to play in old boats.

Thank you, John Thompson, for sharing the journey with us through your interesting narrative and pictures.