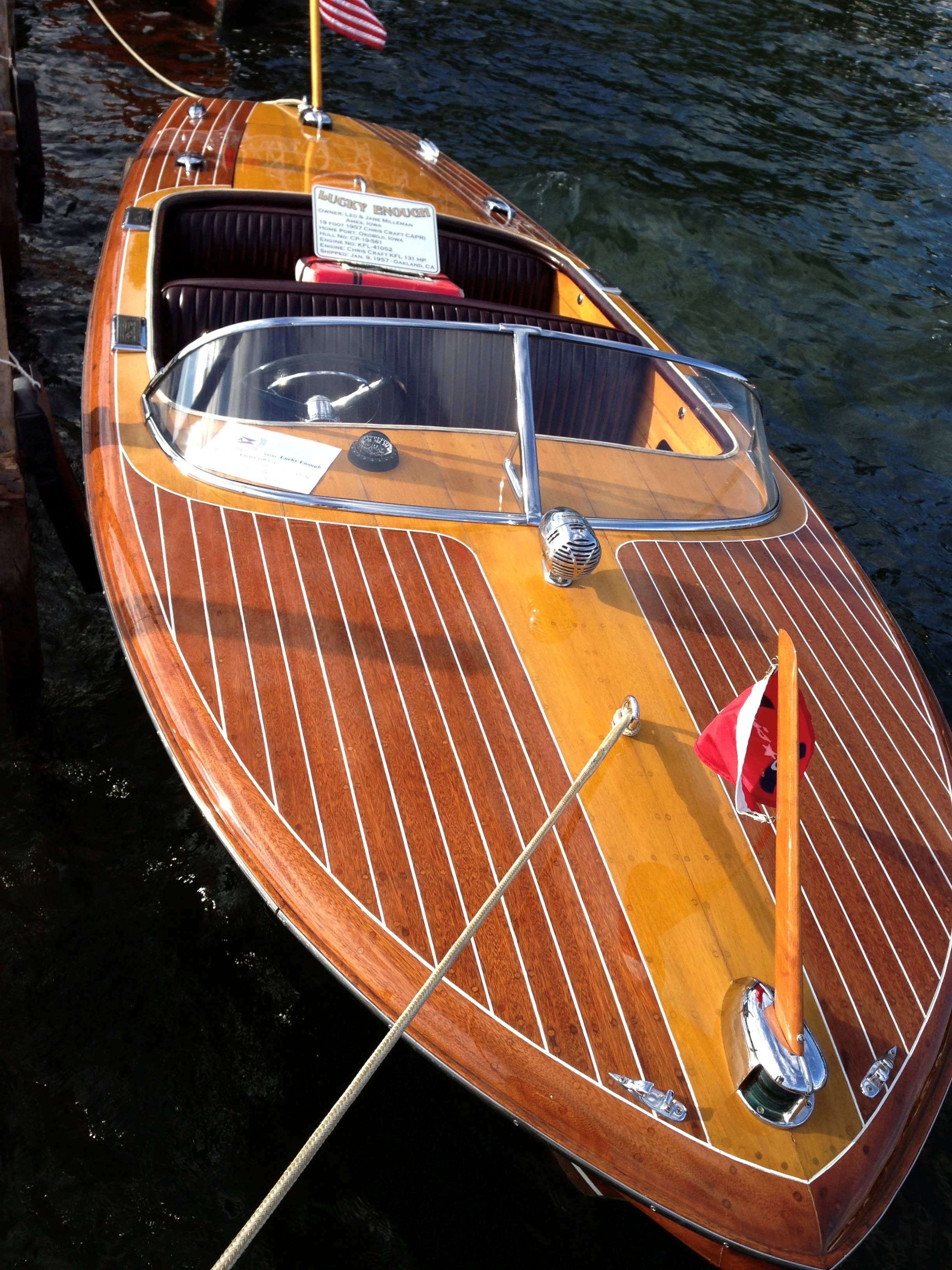 Jane (my wife) and I grew up in Spencer, Iowa close to the Iowa Great Lakes in the Northwest part of the state. Jane’s parents had a summer home on Okoboji, a deep water blue glacial lake. Jane and I dated in high school and early college years. Her parents had traded a small Larson runabout for a used Chris Craft utility woody. Neither her family nor I really knew much about classic boats but it was a beautiful woody and in the 60s there remained numerous wood boats on the lake. When I went to New York for my internship, the boat and summer home were sold.

Jane and I were married in 1969. We always loved the Okoboji lakes area and upon the passing of her parents we bought a cottage. Both Jane and I have a passion for antiques and history preservation. Our family wanted a boat. Why not look at an antique woody Chris Craft.

I secretly found one online close to the twin cities. I asked Jane what she wanted for our wedding anniversary. She wanted a visit the twin cities, go shopping, and have a nice dinner! I suggested we drive by this “woody” store enroute. We fell in love with the 19-foot 1957 Chris Craft Capri. We had lunch over a fast food burger, thought it over, and made the purchase. I kept my promise and took her shopping.

It was late summer and the seller, Mitch Lapointe, agreed it could be water ready by spring. I had him add a few coats of varnish over the winter. We picked it up the following March when the ice went out. I had done my research over the winter tracing its roots and learning it had been sold new to Oakland, California in January 1957. The ACBS registration information, new friends, and contacts through the Dyhrkopp Iowa chapter helped me greatly. From Oakland it was taken to Lake Tahoe. When I bought the boat she had the Lake Tahoe Yacht club license plates and brackets and still does.

In due course it had been sold and transferred to Coeur d’Alene, Idaho. The rear gold lettering transom name “LUCKY ENOUGH” remained on the boat. It went from that lake to a garage in Spokane, Washington. I was told the owners intended to restore it but they ran out of time and resources. Mitch Lapointe of Minnesota located it and brought it back for sale. It was in very nice condition but needed a bit of tune up and polishing which was done through the winter after purchase. The boat is all original with a soaker bottom, original KFL engine … but had some mismatched carbeurters and some rust in the fuel tank. We like original if at all possible. “Lucky Enough” has an original siren, Chris Craft siphoning system, with an added electric bilge.

Upon first launching in Okoboji friends and I backed it in the water …. leaving it on the trailer. It fired right up albeit a bit rough. However, the hull rapidly filled with water and we quickly pulled it out. On land we found a seal had not been replaced around the tail exhaust. Water was pouring in.

Steve Dyhrkopp the son of Jerry for which our Iowa Chapter is named helped me along with other friends from the ACBS local chapter. We fixed the leaks, pulled the engine, put in a new gas tank, fixed a bent prop shaft, repacked the flax prop shaft and soaked it, and bought an enclosed lake lift completely covered to keep sun off the new finish. I was working as a physician and could not do all the work but thanks to these friends I learned the vocabulary and visited often as Steve, friends, and I tuned and fixed the Capri over the ensuing weeks and months. lt’s wonderful to make new friends, enjoy new passions, hire experts when appropriate, and belong to a focused hobby group like ACBS to obtain appropriate resources.