Lymans on the St. Johns River 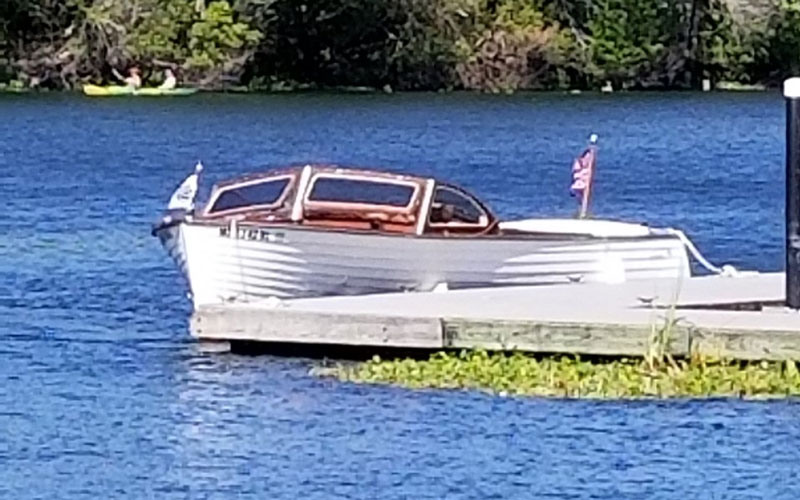 Report and photos by Gene Porter

As most readers already know, every March vintage boaters from around the country respond to the lure of the Sunnyland Chapter’s annual boat show in Tavares Florida as though it were a genetic mating ritual.  One hardy subset of this migration travels by boat; up the historic St. Johns River to the show and then back down the river to the north after the show. 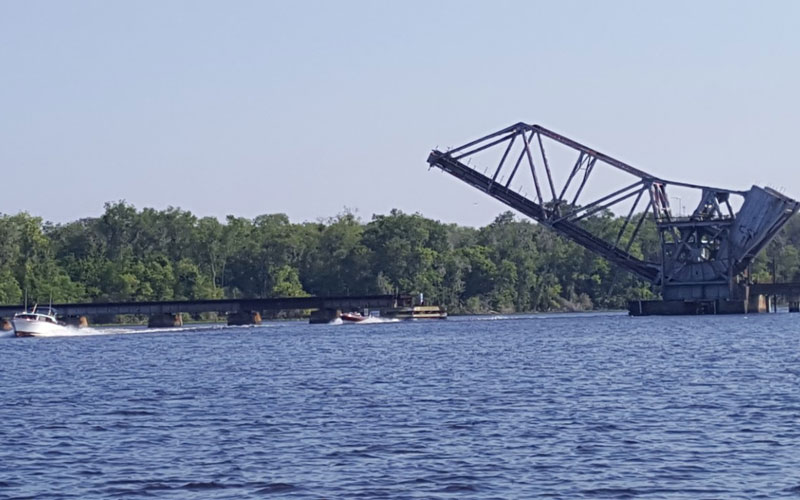 Some participants seem to always be there, in addition to the perennial leaders, Guy Marvin and Gerald Dake. These include boats ranging from Stephanie Ryan’s spectacular “Neverude” powered 17’ Dorsett outboard pocket cruiser, to Chris Johnson’s always pristine Shepherds. But every year it seems that more people come to understand the perfect match of vintage Lyman lapstrake boats and these river trips with their myriad scenic side channels and warm springs.

This year I was again fortunate to have a berth in Ray and Della Glenn’s 1959 23’ Sleeper Della Louise, a sister ship to my own True North, which has made the trek from New Hampshire in past years.  Ray and Della routinely trail the Lyman south from the Annapolis, Maryland, area specifically for the show and river trip. 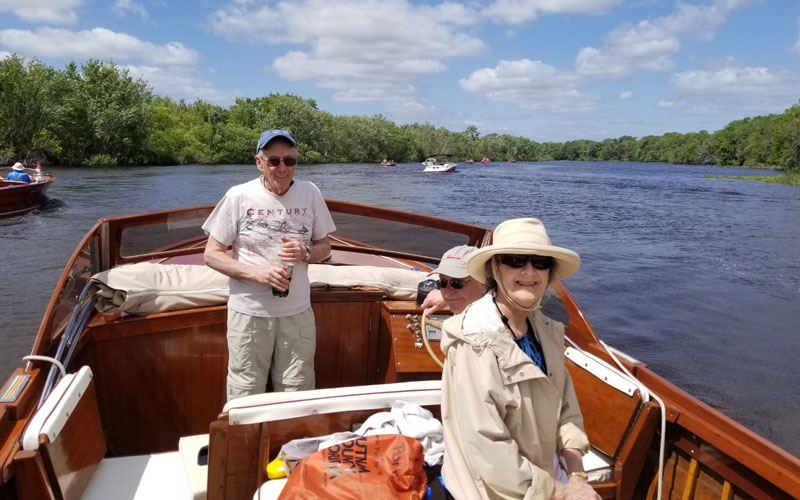 This year we were also accompanied by another Lymaniac, Steve Pond, the President of the Lake Champlain Chapter, pictured below on his Lake in his Bessiana. 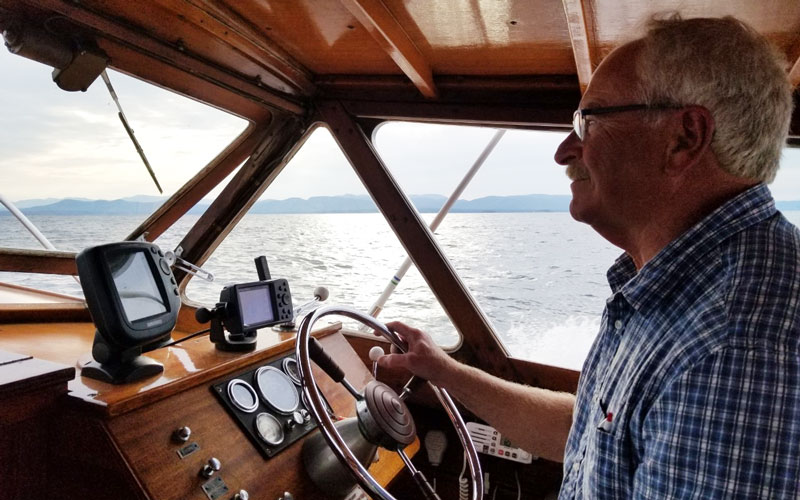 With their iconic skegs, Lyman inboards seem particularly immune to having their running gear fouled by the ever-present aquatic vegetation, particularly when sneaking up on a prime quarry. 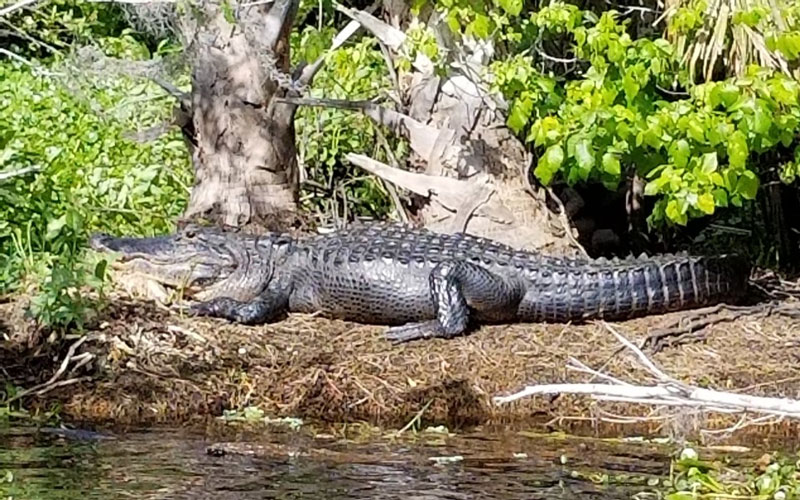 One of the planned highlights of the southbound trip was to be a rendezvous with the new Flagship of the Sunnyland Chapter’s Lyman Fleet, Don Babcock’s recently acquired 1995 30’ day cruiser – Escape.

Unfortunately, the day before the planned river cruise, Escape tangled with a submerged log when entering Lake George from the south. The impact sheared the starboard shaft at the coupler and mangled the prop and strut. Fortunately, a Travel-Lift was available at Astor and repairs were started as our cruise proceeded. Hopefully, Escape will join the river cruise next year. 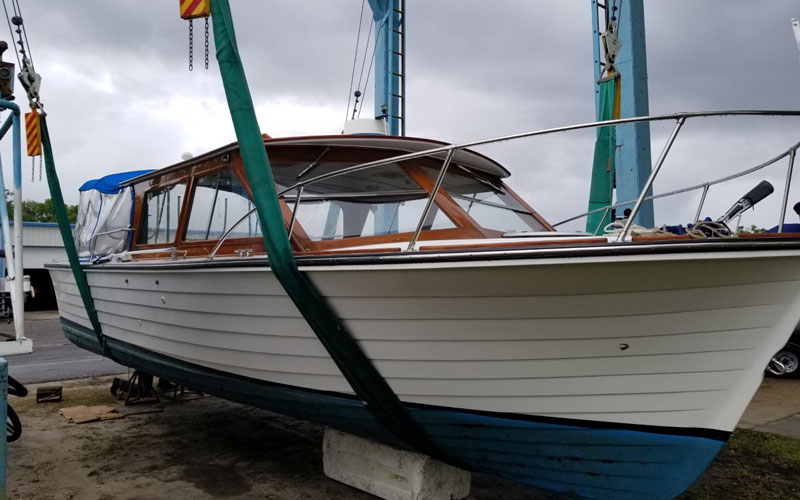 The show at Tavares featured two prime examples of Lyman’s popular 15’ outboards from the 50s.  One was sold at the show – for the second year in a row. 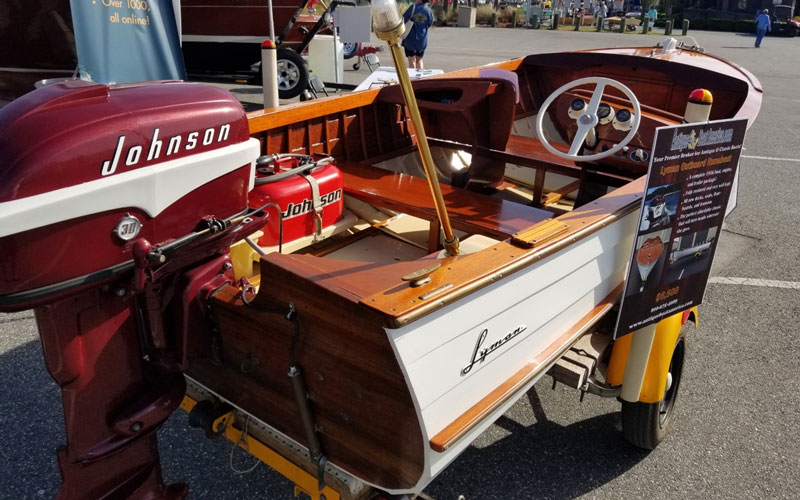 The other was Jim Kelly’s Bella, a perennial favorite at the show with a long family history. 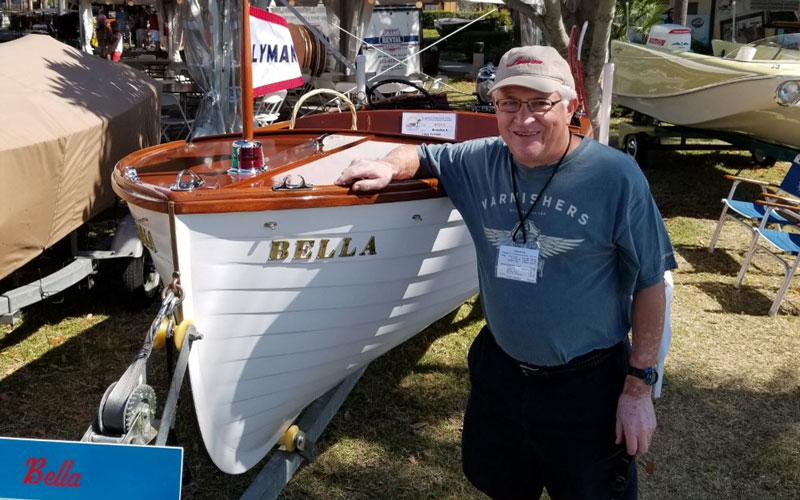 Finally, another perennial denizen of the Saint Johns River is the 25’ 1963 Lyman Sleeper aptly named “.5” that mirrors the joint ownership and operation in Florida by ACBS Canadian officers Rick Terry and Dunc Hawkins. 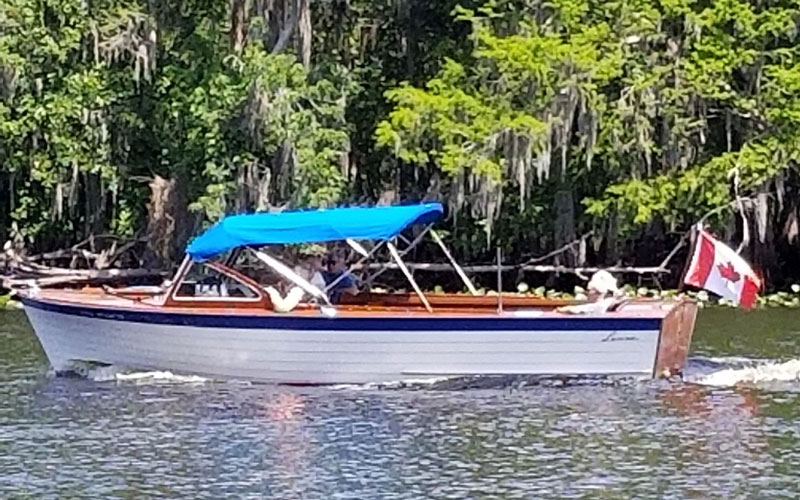 In years past there have been more Lymans, and more total boats, on the river cruises. Attendance is thought to have been down this year because there was no dockage at the show due to hurricane damage, and some of the usual participants chose not to haul their boats for only the cruises. Next year should be a banner year. I hope to see many more Lymans.

Thank you, Gene Porter, for sharing the St. Johns River cruise with us.

Your announcements, stories and pictures may be emailed to [email protected] or click this button:  Submit pictures and information for ACBS Website