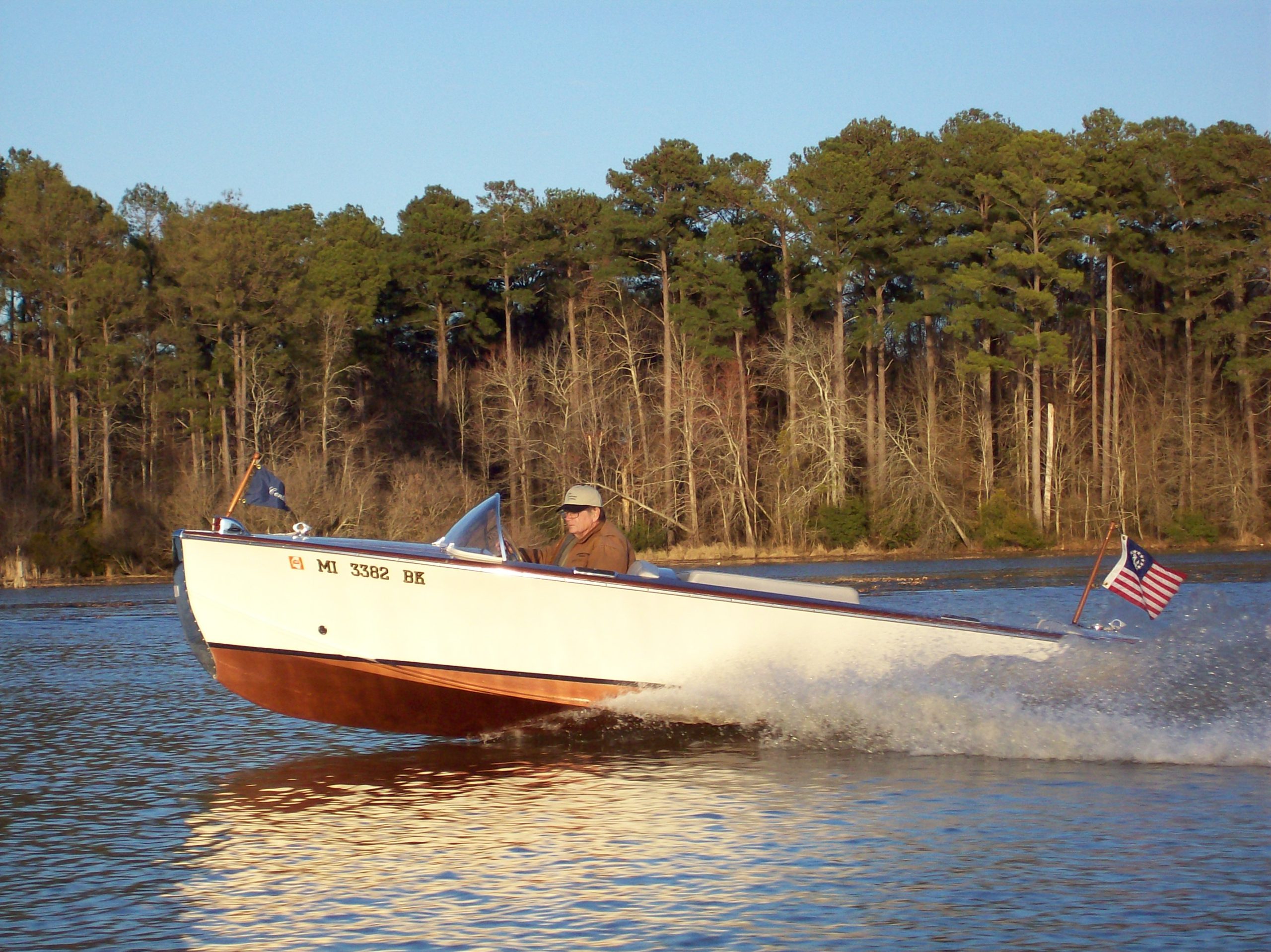 By John & Pat Gauntt member of the Dixieland chapter

The story of Mama Hat goes back to perhaps the early 1940’s when my folks took me to Clementon Lake Park, an amusement park in New Jersey. Among the attractions beside the roller coaster and merry-go-round was a speed boat ride. It cost 50 cents. I wanted to go so bad, but my dad would not spring for it About that time, I was 4 or 5 years old, Dad built a boat in our garage, however boats had all but disappeared from our lives as WWII took every one’s full attention.

Along the way I built an outboard 12’ kit boat while we lived in Brazil. Several other boats came and went from the picture, but none of them quite filled the desire to have a speed boat, until 2005 when the internet revealed a 1948 Century Deluxe Utility for an amazingly low price. The hitch, it was in Ohio and we live in Mississippi. But our son lives on the edge of Ohio. We drove 9 hours to his house. Then he and I drove another 4 hours to “look” at this speed boat. I bought it and we trailered it back to Mississippi, heart in mouth hoping the trailer wheel bearings would make it.

Someone had replaced the fuel pump diaphragm with a piece of inner tube. Not a good thing, as gasoline and natural rubber do not cooperate. The tach did not work. The carburetors were out of sync and floats did not float. The rubber impellors of water pump did not pump. And worse of all, there was too much sea water entering the structure for comfort.

My dear wife has ridden motorcycles, flown airplanes, and ridden in boats on the Amazon River with me but when we got stranded out on the water two times in a row Well that was the last, We owned a white elephant. no white supposed to be boat.

Eighteen months later, after learning to steam bend oak a new 5200 bottom, including a new keel with hole for prop shaft, and hoodwinking our grandson into helping, the “Mama Hat” was ready for sea trials. You must know that our grandchildren had not been able to pronounce “Mama Pat”, and it came out as “Mama Hat”.

Owning a vintage wooden boat and doing all the work myself, except what our grandson did, has been a real learning experience. We have had Mama Hat to an ACBS meet at least once every year since.

One of the things that has been rewarding is rescuing modern boats that have been stranded. Memorable to this, is the time a 60-year-old boat with a 70-year-old driver pulled a modern “skidoo” to harbor. It has been a pleasure to take Mama Hat to the river. She is not a showboat. But she has been a dependable, leak proof source of pleasure for the last 15 years.