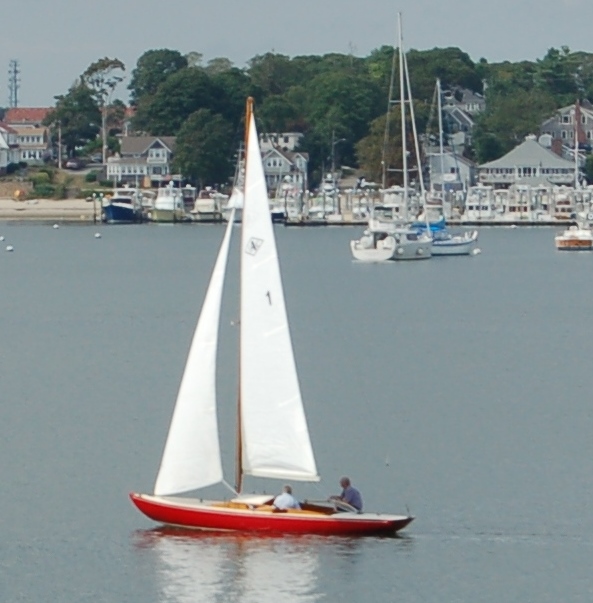 by David Broderick member of the Northern California/Lake Tahoe chapter

MATOKA is a 1937 24′, ( LWL 17′,) Quincy Adams Interclub Sloop, 4′ keel, 1200lbs ballast – one of nine built for racing by the Quincy Adams Shipyard, Quincy Ma, which had taken over the old Lawley Shipyard. Both have long since closed. My home waters are in Buzzards Bay, a body of water off Cape Cod which is lovely in the morning and can be unforgiving in the afternoon. In 2015, I was looking for a day sailor which I could handle and which could handle Buzzards Bay.
Fortunately at that time I had subscribed to Bone Yard Boats, a publication which listed old wooden boats needing to be saved. Bone Yard Boats saved a lot of fine boats, mine was one. No boat listed by BYB was priced over $10,000 and boats of questionable buoyancy were “free to a good home”. The dye was cast.

I made the purchase in 2015, hull #1, originally built for Thomas Burgin, the longtime Mayor of Quincy MA (Burgin Parkway) and named CLAIRE II. She was competitively sailed in Quincy for many years, later sold, restored and renamed ADAMANT. The boat then had several subsequent owners prior to my purchasing it. The only other Interclub to survive is hull # 2 (ADAMANT), which was purchased and restored by a prior owner of my boat.(sellers remorse ?). That ADAMANT is still competitively raced and recently won both the Opera House Cup and Corinthian Yacht Club Classic Regatta, both well known local wooden boat events.

My cost for the boat was the approximate cost of the new sails which the previous owner had purchased. Any restoration is a personal commitment. It can be as extensive or shallow as you want to make it. Knowing that I would be dealing with an unforgiving body of water, I wanted to make the boat as strong as possible. Fortunately for me, there is a local boatyard The Wooden Tangent in Mattapoisset, MA., which deals only with classic and antique smaller wooden boats, primarily sailboats. They were up for the task and they did a beautiful job. Restoration included 12 new planks, 5 ribs, new transom, new bulkhead, new cockpit sole, new seating new cabin roof, new tiller, rigging etc. The only things we didn’t have to replace were the wooden mast and the T-boom, a brilliant invention which I had never seen before or since.

The boat is great. She’s like a little tank. Great for an afternoon on Buzzards Bay!