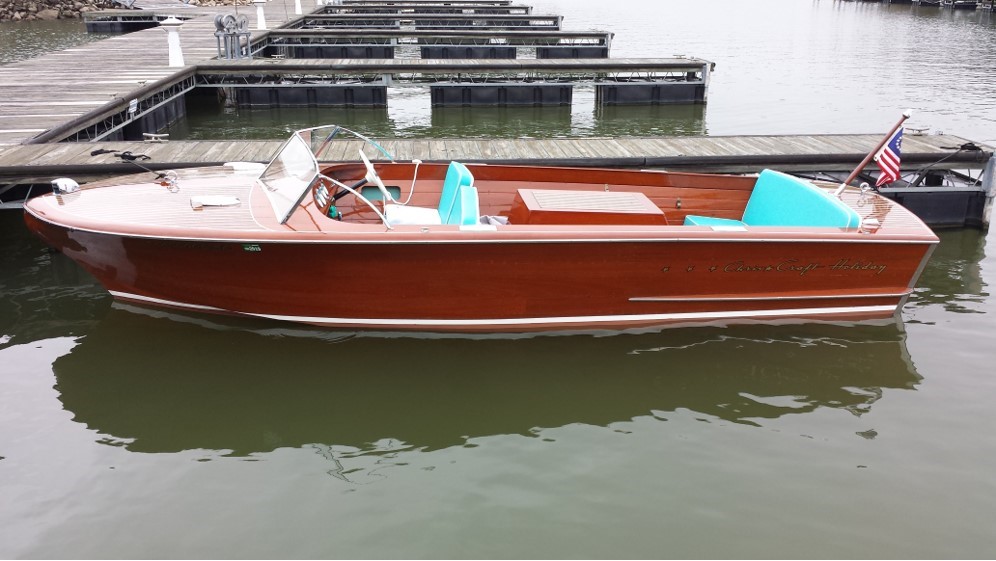 By Steve Dagg member of the Heartland Classics chapter

She is a 1957, 20’ Chris- Craft Holiday. In 2016, I found her through an ad out of Crosslake, Minnesota. She was originally delivered with hull number HY-20-118 to Minnetonka, Minnesota, powered with a Chris-Craft M-130 and, at that point, had been in storage for more than 30 years. My inspiration for purchasing this make and model of boat was the boat his father owned on Kaw Lake near Ponca City, Oklahoma in the 80’s and 90’s. His father owned an 18’, 1957 Chris- Craft Holiday.

I drove from Oklahoma to Minnesota to take ownership and found that she had a rebuilt engine, new gauges, and a new engine box cover. Back in Oklahoma, Brent Howard (Howard’s Antique Boat Shop, Grand Lake, Oklahoma) replaced all of the wiring, rebuilt the generator and repainted and revarnished the bottom. The upholstery was redone in the original turquoise blue by Moss Covers in Tulsa, Oklahoma.

Her new home port is Hi-Point Estates in Afton, Oklahoma where I along with my wife and family own a vacation condominium. She is named after our granddaughters, Ashlynn Carter Dagg and Mackenzie Rae Dagg……thus, the Carter Rae! She has been in two of the Heartland Classic Mahogany and Chrome boat shows on Grand Lake, Oklahoma and she placed in the silver category in both shows. She has also been at the Oklahoma City boat show. We enjoy bringing family and friends up to Grand Lake every summer for boating and BBQ.

The Carter Rae is often a great conversation starter with other boat lovers in the area!