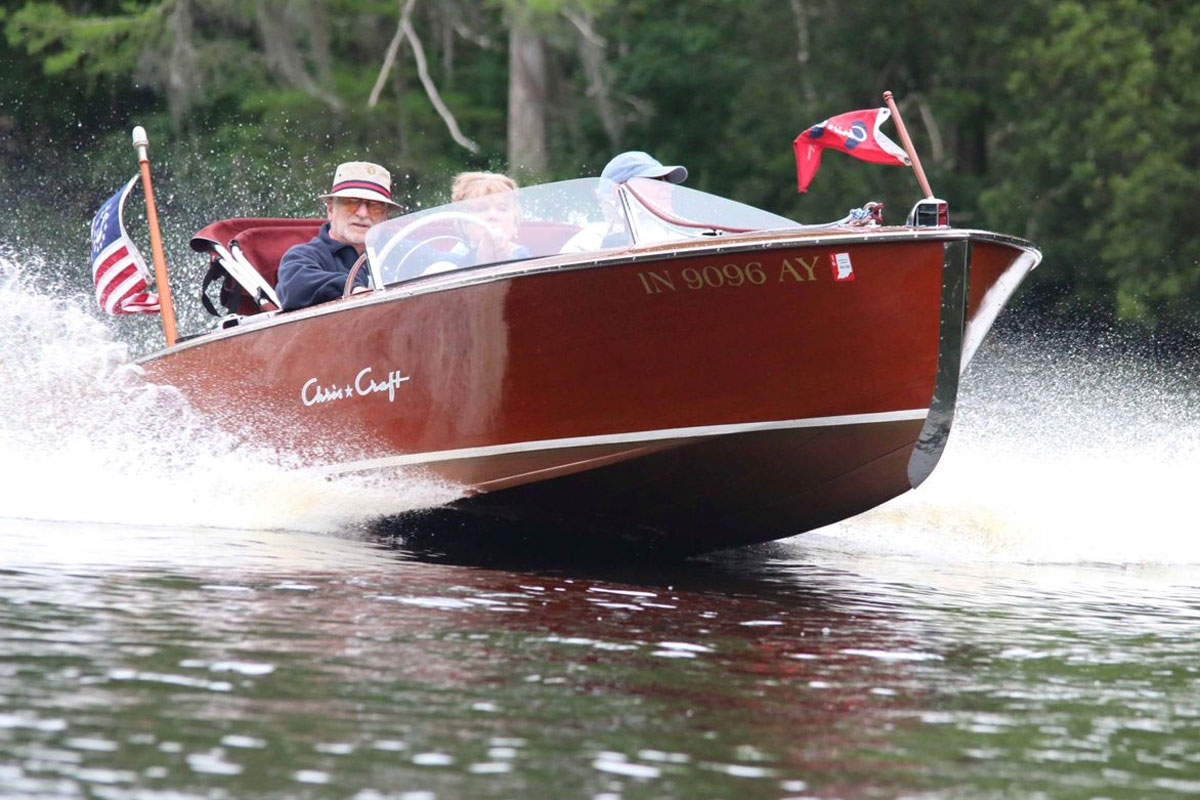 In 1986, my brother-in-law bought an old wooden boat that was sitting under a tree in the mountains above Lake Meade, Nevada. He paid all of $250 and intended to restore it. Two years later, he was transferred to Long Island, hadn’t touched the boat since he bought it, and didn’t want it anymore. The deal was, I pay the trucker for his detour to Bloomington, Indiana on the way to Long Island and the boat was mine! What a deal! I immediately accepted! My wife Donna, who had seen the boat while visiting her brother, kept insisting that he “Just Burn It”. She was out voted 2 to 1.

Three weeks and $500 later, the boat was sitting in my driveway. It was the saddest looking, lopsided thing you could imagine. You could see the concrete driveway through multiple cracks in the bottom. There were no engine hatches and all the hardware was thrown in cardboard boxes in the hull. Donna joked that we needn’t worry about it filling up with water during a rainstorm. It was Donna, however, who bought the book “Legends of Chris Craft” to try to identify the boat before I did anything dumb. I got the address of the Mariners Museum and the phone number of “Pete Henkel” (The Author) from the book.  I sent pictures and a letter to the museum with the engine numbers. They indicated that the motor was originally installed in a 1953 19’ Chris Craft Racing Runabout 19R-455. They sent pictures, a hull card and blue prints of the boat. The pictures looked like my boat (well, roughly speaking), which had not a shred of color or varnish.

Fortunately, I then called Pete Henkel to see if he might want the hardware before I burned the boat, a fateful decision for both me and the boat. Pete emphatically stated, “If it’s really a Chris Craft racer, You DO NOT BURN THE BOAT! You restore the boat, or you sell the boat”.  Pete convinced me that I could restore it, even if I had not done one before. (I had not) He spent many hours on the phone over the next couple years explaining how to do the job, recommending books on restoration techniques and parts suppliers. Suffice it to say, “Mahogamous Affair” exists today because of this interaction with Pete, for which I am very grateful.

The restoration work took 4 years to complete. The shop drawings from the Mariners Museum revealed that most of the wood on the engine stringers and frames were non-factory 2 x 4 and 2 x 6 doublers installed to try to keep the boat rigid. This boat had been truly and badly HAMMERED. When I tried to lift the boat off the trailer using the lift rings, the bow and stern came up, but the motor and center of the boat stayed on the trailer. I eventually found the hull number (19R-455), verifying that the racer indeed matched the engine numbers. It was delivered to a boat dealer in Boulder, Colorado in 1953.

In short, my racer now has new engine stringers, a completely restored frame, a new 3M 5200 double bottom, and new book-matched side, deck and shipside Planks. The sides are ½” African mahogany and the deck has a 1/8” plywood under-layment with ½” African mahogany planks epoxied and screwed in place. All hardware was re-chromed, all instruments restored by California Classics, the motor rebuilt by me and a Sprint Race car engine builder friend, and new upholstery.  A new trailer was also procured. The name “Mahogamous Affair” was coined by Donna, who hadn’t seen me for much of the 4 year restoration project, which was done in our garage. She assumed I was having an affair with the boat, hence the name.  The whole package hit water for the first time since???? on June 26, 1994.

I began to appreciate this boat during the restoration process. However, complete infatuation occurred on the first day my son and I took the boat for a ride. I believe I was actually blushing with both fear and embarrassment at my utter excitement of driving this new boat as fast as it could go across Lake Lemon here in Bloomington, Indiana. The roar of the engine, the wind, the splash, the speed made me feel like that 10 year old kid in 1952 at the Dells. I guess some of us just never grow up! Donna and I have enjoyed the last 24 years taking this boat to shows and cruising on the St. Johns, Ohio, and Tennessee rivers ever since. It has truly become part of the family. 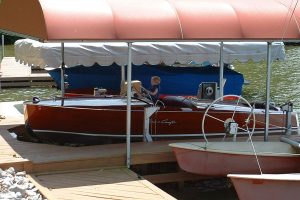 Our grandson getting a boat driving lesson in Mahoganous Affair in Unionville. Our son’s 1962 CC Ski boat is on the lift in the background. 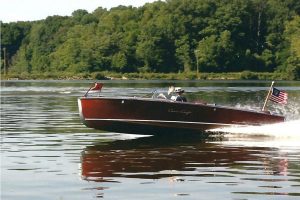 Mahogamous Affair running on our lake in Unionville Indiana. 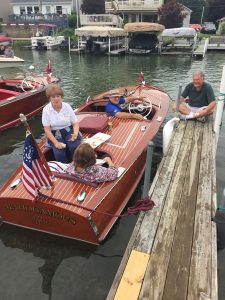 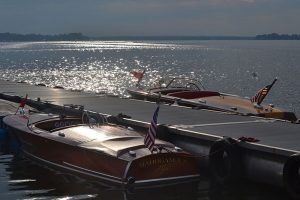 Mahogamous Affair at the Tavares boat show in 2016 after the St. John’s river cruise.