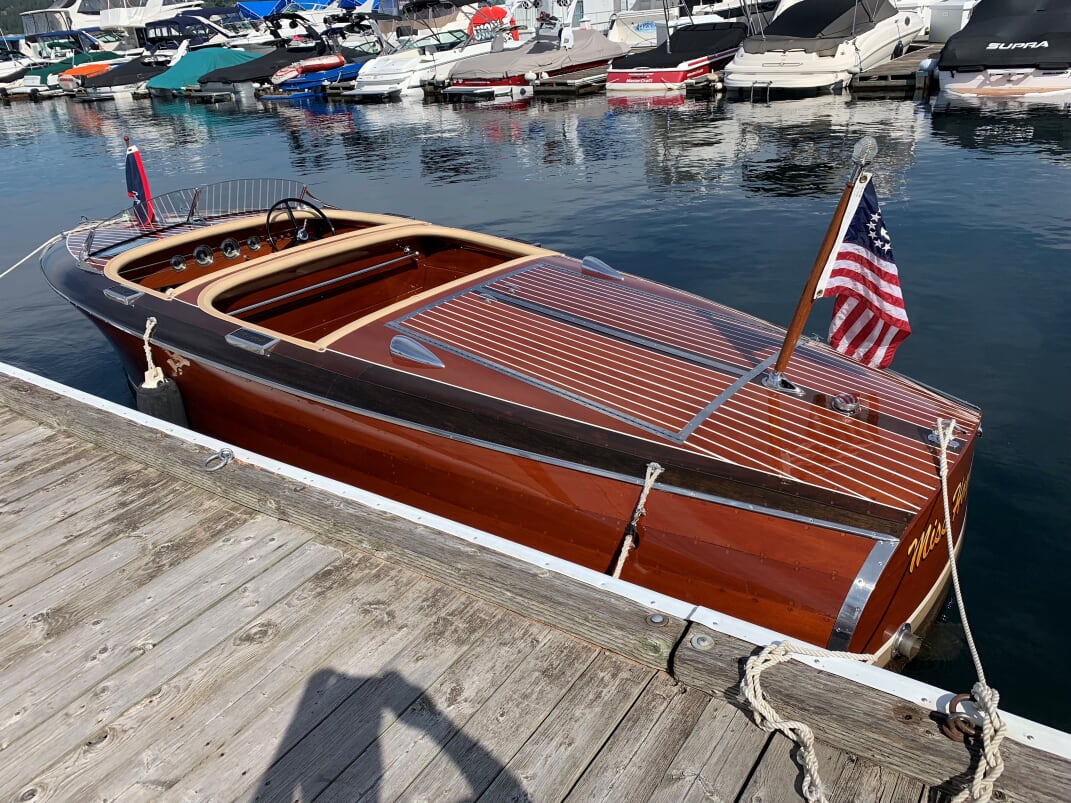 My childhood in the 50s and early 60s was spent on Long Island sound where we belonged to a yacht club. My father had Chris-Craft cruisers beginning with wooden ones and later fiberglass. I bought my first boat at age 14. I loved fishing, water skiing, and scuba diving. There were a few wooden runabouts on Long Island sound which were striking in their beauty. I remember going to the Jones Beach marine theater with my parents and watching Guy Lombardo arrive in a beautiful wooden runabout. I decided that I wanted one!

In the 1970s, I moved to Rochester, Minnesota which was the only county without a natural lake. I spent vacations in Northern Minnesota fishing on the many lakes. There were a lot of beautiful wooden runabouts. Unfortunately, I had little time and no place to keep a boat. I dreamed of having a wooden runabout of my own. My dream was not abandoned but placed on hold.

I began searching for a retirement home in the 1990s. In 2001, I purchased my home on Hayden Lake just north of Coeur d’Alene, Idaho. There were 30 woodies on the lake! The Coeur d’Alene wooden boat show further stimulated my interest and I began my search for a boat of my own. I finally found Miss Hayden, a 1940 Chris Craft,17-foot runabout, in 2003 and began the long restoration process. I looked at many beautiful wooden boats prior to selecting the Barrell back. I thought the double curve of the transom exemplified the art of wood boat construction and represented a time of unparalleled craftmanship. She also represented a time when life was less complicated and more refined just prior to the second world war.

The boat had originally been sold in Oregon and resided its entire life in the Inland Northwest. A fresh water boat was important to me as I am aware of the corrosive effects of salt water from my childhood. The boat had been owned in Spokane, WA before being sold to the current owner. The boat was modified to appear similar to a StanCraft boat with yellow stripes, yellow interior and a GM 350 engine. I saw a potential Swan in the ugly duckling!

Once I owned my own boat, I joined the Antique and Classic Boat Society. The Inland Empire Chapter of the ACBS was a great resource for helping me. The club is filled with individuals with a love of classic boats who enjoy using them. The social activities and the annual boat show in Sand Point are highlights of being a member. Like classic cars, antique wooden boats require a great deal of care and expense. An owner loves his boat as a member of his family.

My goal was to restore her to an original appearance. The initial refinishing to the boat was performed by Mike Kerfoot with the aid of his son Andy. A search for a period correct engine led me to Sid Young who provided a Chris Craft KFL engine that was in need of rebuilding. The Resort Boat shop rebuilt and installed the engine and addressed many issues. The interior was replaced with correct beige vinyl. I did not initially appreciate the complexity of refitting everything to original condition. As I have learned everything takes twice as long and costs twice as much as your budget! In 2014, the finish was failing and the interior upholstery needed to be replaced again. I asked Andy Kerfoot to restore the boat to its original appearance. Andy stripped the boat, refinished inside and out and replaced the instruments with restored gauges. New upholstery was placed. The restoration of the boat was similar to a frame off restoration of a classic car.

From where did the name Miss Hayden arise? The former owner named her after his granddaughter. Since she resides on Hayden Lake and it is bad luck to change the name of a boat, she retains her name. I rebuilt my dock to include sun protection for the boat and keep it in the water all summer where it is used on a regular basis.