From the Archives: Miss Lucky 59 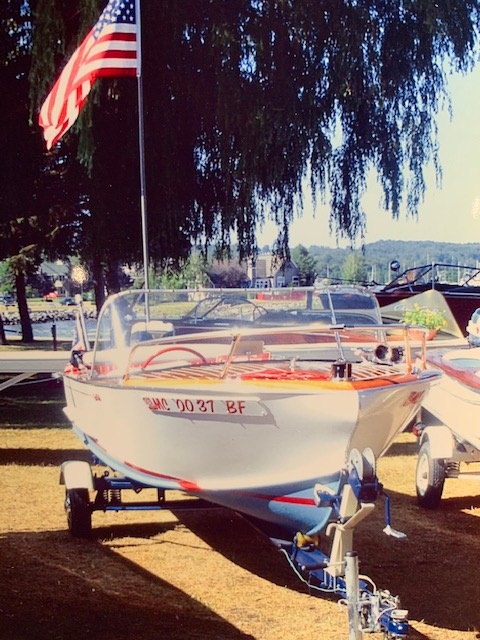 By Darrin Podskalny member of the Water Wonderland chapter

The ownership of our 1959 Skipper-Craft started when a good friend of mine, Geoff Reynolds from Holland, Michigan had shown me his Skipper-Craft on a spring weekend in 2001. Geoff and I were heading to a swap meet for outboards and boats in lower Michigan. When we returned I was really interested in the runabout he had purchased and restoring. I told him if he ever came across another boat like his to contact me. Two weeks later Geoff contacted me and said that he had found one, but the boat needed some work. My wife Mary and I live in East Jordan, Michigan on Lake Charlevoix and after talking it over with her I found myself traveling back to Holland to pick the boat up.

Skipper-Craft boats were made in Holland, Michigan, they are a molded plywood boat, with a mahogany deck, powered by an outboard motor.

I restored the boat and we have used it about every summer since 2002. I have two daughters and they grew up appreciating the water of Lake Charlevoix with the boat. We typically have gone on many evening cruises and have trailered it to other small lakes as well. Our family named the boat Miss Lucky 59 and the boat has become part of our family events every summer. I help organize and co-direct a classic boat show we have on Lake Charlevoix, The South Arm Classics, and Miss Lucky 59 has always been in the show along with other shows in Michigan. The boat is 16’ in length and is powered by a 1959 Evinrude 40 HP Lark and has always been a fun part of our summers.