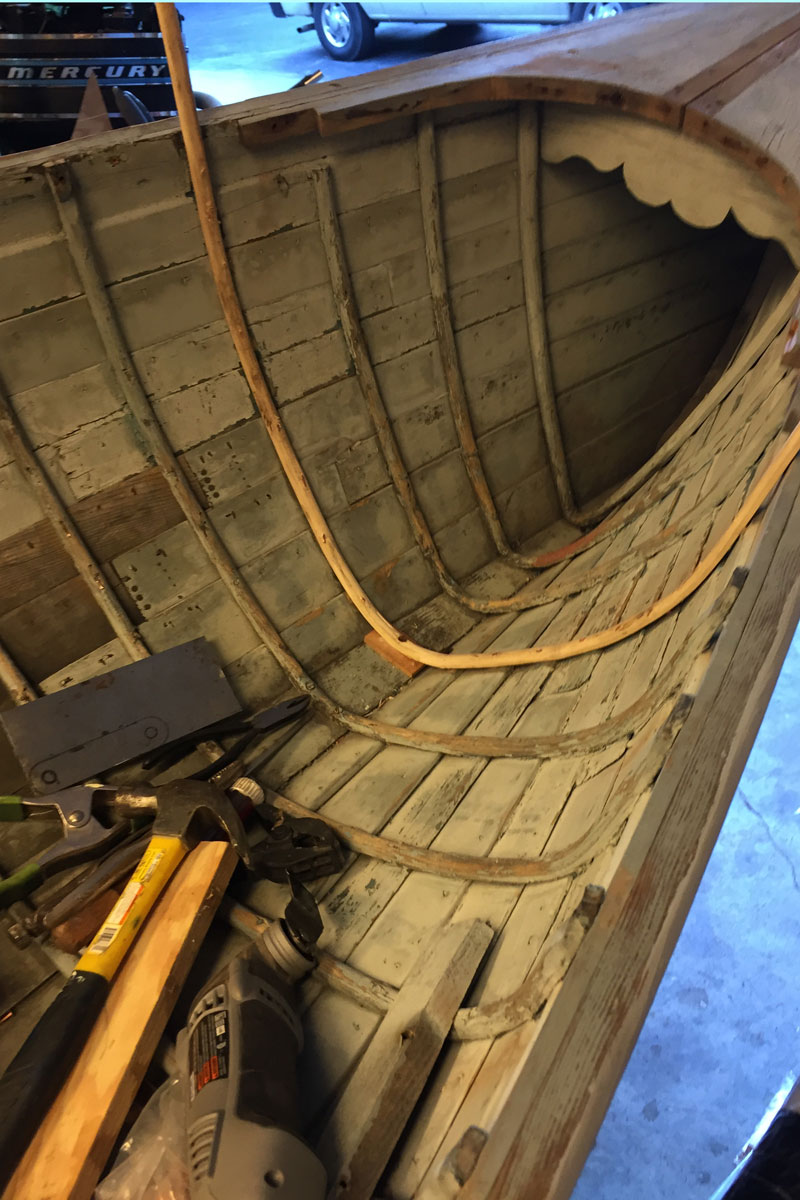 ACBS provides each Chapter a “Most Original” Award to present at their chapter’s boat show.

In 2017, Mississippi Valley Chapter’s Award went to a boat owned by Gordon Bourne.

The Lina, as told by Grace Thayer Bourne

In my Mom’s childhood, a long wooden rowboat was in the boathouse at my family’s camp in the Northern Adirondacks – Lake Chateaugay.  Now that my father has restored it with the help of members of the ACBS Mississippi Valley Chapter in St. Louis, Missouri, I’ve been asked to recite its history.  The boat was built around 1905 and is known to Chateaugay residents as a “Bellows Boat” – having been built by Ralph and/or Cassius (“Cash”) Bellows, cousins.  Ralph’s father, Millard Bellows, built steamboats that serviced a robust tourist trade on Lake Chateaugay in the late 19

The boat was built around 1905 and is known to Chateaugay residents as a “Bellows Boat” – having been built by Ralph and/or Cassius (“Cash”) Bellows, cousins.  Ralph’s father, Millard Bellows, built steamboats that serviced a robust tourist trade on Lake Chateaugay in the late 19th century.  The boat is an example of an Adirondack guide boat.  The hull is white cedar clinker-built lapstrake, and the ribs are bent maple, some bent to a near “V” near the stern and bow.  It can be rowed from either the center seat, if one person is in it (the guide), or from the bow, when a passenger (client) sits in the stern.  The same set of oarlocks are used in either instance, and so the boat is rowed in opposite directions depending on which seat is used.  It moves smoothly in the water, like a canoe with high freeboard.  It could accommodate a moose as cargo.

As children in the late 1960s, my Mom and my aunt would stand on the gunwales and rock the boat side-to-side, singing “tippy-canoe – da la la, tippy canoe” until they capsized her.  She leaked in those days, despite the efforts of my great uncles to seal her with bathroom caulk and house paint.  She was the “Leaking Lina.”  My great-grandmother, Grace Thayer, who was the daughter of Warren Thayer, a long-serving New York senator, would look on serenely, perhaps thinking of the songs she would sing with her guitar that night. 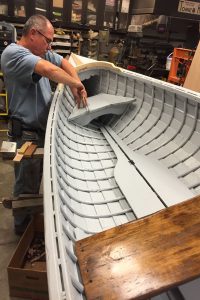 New paint on the Mississippi Valley’s 2016 Most Original boat.

But now the Lina leaks no more, and I have reason to hope my own children will play “tippy-canoe” next to the same boathouse where the Lina has rested each winter for at least seventy years.  In that way, the Lina can act as she always has, not only as a vehicle to cross water but as a vehicle into the past, a touchpoint for the re-telling of my family history. 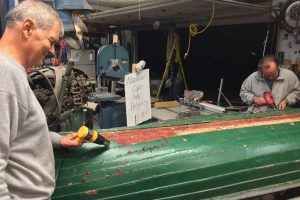 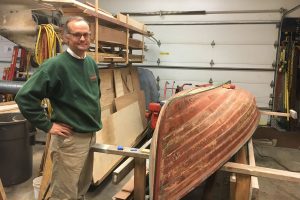 Gordon Bourne with the stripped canoe.